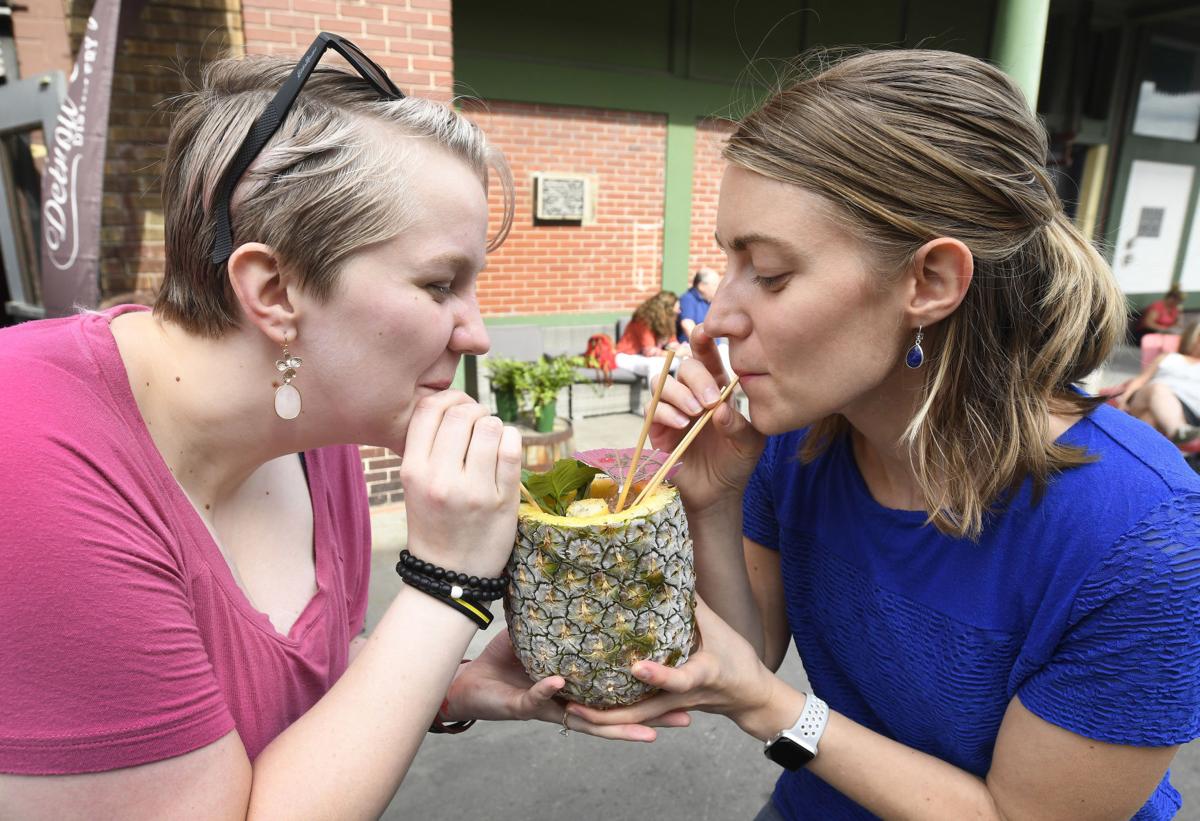 Lily Dickens and Margaret Cenver share a “Walk Without Rhythm,” which consists of Summer Rum, pineapple pink guava, kiwi, lime, vanilla and DCD falernum, served in a pineapple, at the Detroit City Distillery in Detroit. 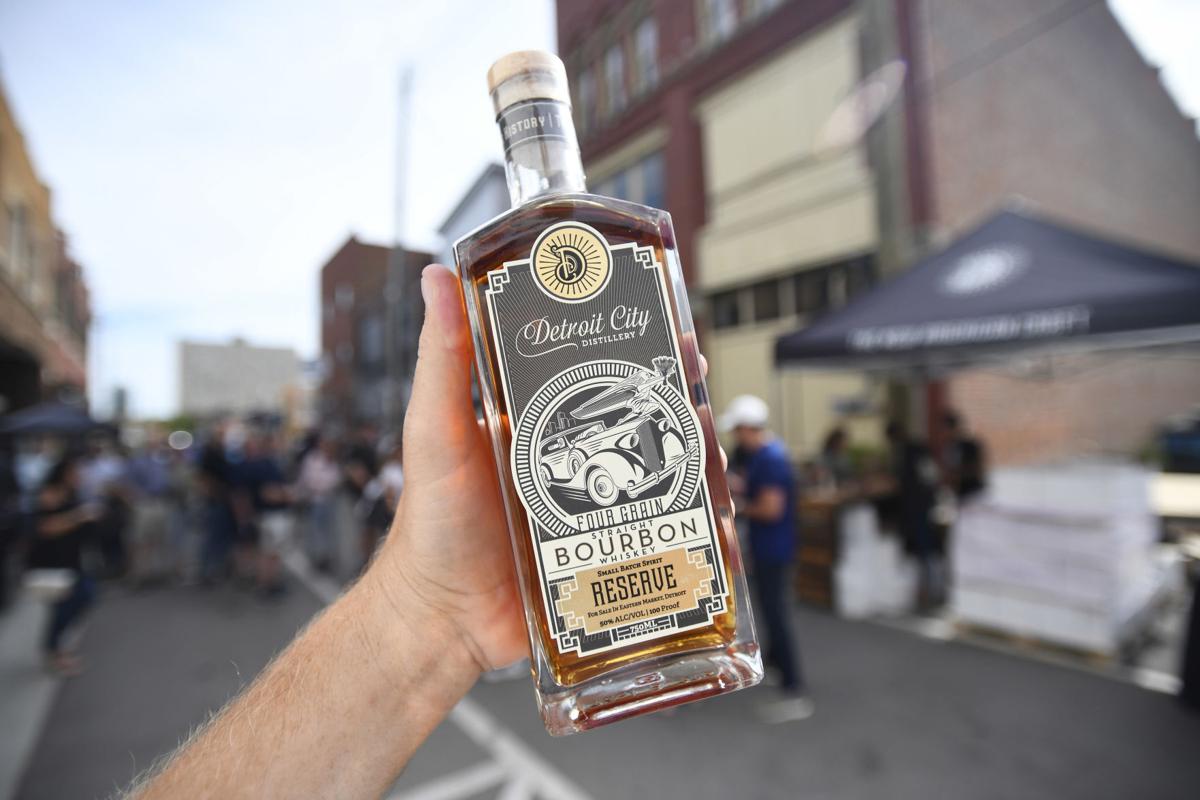 Lily Dickens and Margaret Cenver share a “Walk Without Rhythm,” which consists of Summer Rum, pineapple pink guava, kiwi, lime, vanilla and DCD falernum, served in a pineapple, at the Detroit City Distillery in Detroit.

DETROIT — When Denny Heffron started selling grains to Grand Rapids, Mich.-area distillers for booze-making about a decade ago, the Belding farmer was concerned craft spirits might be a passing trend.

The 100-year-old family-run Heffron Farms began packaging 50-pound bags of grain for the distillers, which grew to 1-ton totes. Besides corn and wheat, they also supplied them with fruit, such as cherries..

“It is not a short-lived little fad,” said Heffron of the state’s growing distilling industry. “They have exceeded what their expectations were every year, and it’s been great working with them.”

During the past two decades Michigan’s craft beer and wine industries have blossomed, and now the state is emerging as a top destination for craft spirits, too.

In the Mitten State, there are a few factors causing the tide to rise for these gin makers, bourbon bottlers and vodka distillers. One is the notoriously strict legislation regarding alcohol laws and regulations have softened a bit in the name of commerce and support for small business. The other is the state’s agricultural diversity.

Jon O’Connor — co-owner of Grand Rapids’ Long Road Distillers, president of the Michigan Craft Distillers Association and one of Heffron’s customers — says the growth involving craft spirits is a testament to the overall independent beverage industry in Michigan.

“I think we benefit a bit because we have such a strong and global craft beverage scene here,” he said. “There are a lot of folks who are primarily focused on distilling, then we also have some of our great Michigan winemakers and cider makers and brewers who have also obtained distillery permits, so they’re counted in that number (of distilleries statewide) because we all have to get the same license.”

Craft distilleries are defined as those that produce fewer than 750,000 gallons annually, as well as those who understand the value and importance of transparency about the ingredients they use, where and how they process and bottle the spirit and the aging process.

“I mean, we’re proud. Michigan is the second most agriculturally diverse state [behind California] in the country,” said O’Connor, who has been in the relatively young business for seven years. At Long Road Distillers, he produces a wide variety of spirits, including whiskey made with wheat or rye and fruit-based alcohol like raspberry liqueur. “We have all these great things that we can use, and we can highlight in our product and a lot of our members already do.”

Michael Forsyth from Detroit City Distillery — which just celebrated its seven-year anniversary — stresses the importance of our region’s close proximity to the Great Lakes.

“We are surrounded by a large percentage of the world’s fresh water, so you have the best ingredients possible at your disposal, so it positions the industry for long-term success,” he said.

“Really, craft spirits are born on the farm. You make whiskey from grain, brandy from fruit, and so there’s all these great ingredients here that Michigan distillers are leveraging to create really amazing, high-quality craft spirits that really kind of embrace the terroir of Michigan.”

Sarah Anderson from Thompsonville-based Iron Fish Distillery knows that firsthand. She says her family-run distillery is the only one in Michigan that’s on a working farm. They produce maple syrup as well as wheat and rye grains that they use to make their line of spirits.

“We make spirits from the ground up using that grain,” said Anderson. She started Iron Fish five years ago with her husband, sister and brother-in-law. They already distribute throughout Michigan and several other states.

Anderson, has a diverse background in marketing and nonprofit management, which she says is “unbelievably helpful” for running a distillery, farm and retail operation.

The craft booze industry collectively uses more than 2 million pounds of fruit and grain grown on Michigan soil. Still, O’Connor says there are “some holes” in that agricultural framework, like rye.

“Rye is a good example,” he said. “Rye in Michigan is typically grown as a cover crop or field rotation crop; however, access to high-quality rye grown for the purpose of use in distilling or beverage production has been very limited.”

He said he may pay more to have Michigan-grown rye than if he bought it from another state, but that’s his commitment to keeping things local. Some of the state’s distillers might not make the choice to buy the local grain, but they might if they had some incentive.

The lift-off point for Michigan’s craft spirit industry was more than a decade ago when Michigan passed laws that allowed distillers to have a tasting room and lowered the cost of a distillers’ license from $10,000 to $100 a year, said O’Connor.

“That was kind of the watershed moment when Michigan craft distilling kind of took off,” he said. “So early on, we were seen by a lot of places around the country as a very progressive state in terms of allowing distillers to exist.”

That change may have not happened if it weren’t for Michigan State University professor and scientist Kris Berglund, who worked with then-Gov. Jennifer Granholm to help write the law that made Michigan, at the time, the most distillery-friendly state in the nation. Berglund, who died in 2018, also led the Artisan Distilling Program at MSU, allowing students to dive deeper into the sciences and tenants of spirit production.

More recently, Gov. Gretchen Whitmer signed legislation to put Michigan’s craft spirit makers in a better position to compete with national brands on store shelves and on bar menus. As of 2021, they can increase the alcohol by volume percentage of canned cocktails from 10% to 13.5% as long as they are packaged in a can less than 24-ounces. The bills also reduced taxes.

One of the bills’ sponsors, state Sen. Curt VanderWall, R-Ludington, says it’s important that lawmakers support businesses as they rebound after the pandemic, and that the craft spirit industry is a “boon” for the state’s hospitality industry.

“Unfortunately, many of our state’s small businesses suffered gravely during the COVID-19 pandemic. It is important that we in the Legislature support these businesses as they strive to bounce back, get people back to work and draw in patrons from across the state and beyond. It benefits all of us when we can work together to get Michigan’s economy moving again.”

Anderson from Iron Fish says that while there are more things lawmakers can do, progress is being made.

“The industry has worked really tirelessly to advocate for legislative changes, and by and large legislators have been unbelievable responsive,” she said. “I’m in a very optimistic frame of mind. I’m seeing a lot of general success and a lot of interesting advancements and achievements throughout our sector.”

“The way it works right now is we sell our products to the state and the state marks them up 65%, and so it’s a really quite a regressive system,” he said. “We’ve had a package of bills that has gotten through the Senate twice and stalled out in the House. This time, we got it through the House we’re sending it back to the Senate.

“It would create a framework where if you commit to using 40% Michigan agriculture to create the base for any of your products, that product would be marked up at 32.5% instead of 65%. That’s the goal, to get Michigan products to the shelves at more competitive prices while ultimately supporting Michigan agriculture.”

When the pandemic was new, people needed alcohol — badly — and for two reasons. There’s the obvious, to drink, but also to sanitize. During the first few days of the pandemic shutdown, the Alcohol and Tobacco Tax and Trade Bureau relaxed its regulations to allow beverage distillers to make denatured alcohol.

This allowed Michigan’s craft beverages makers to spring into action, giving them something to do that kept employees working to create mass quantities of a product that was desperately needed worldwide: giant jugs of germ-killing spray made from neutral grain alcohol.

“We went incredibly hard,” said Forsyth from Detroit City Distillery. “We produced over 25,000 gallons of hand sanitizer. We decided to charge below market price. The lowest price we could find was $28 for a gallon, so we went $25. That price point allowed us to supply the state of Michigan emergency operations center, the city of Detroit, the state police, DTE, Detroit Medical Center — you name it, we were able to really get the product out to a lot of people and help a lot of people ... we never worked that hard in our lives, but it felt good because we were helping people.”

Detroit City Distillery, which has a bar and distillery in Eastern Market that produces small-batch whiskey, gin and vodka, actually saw distribution increase during the pandemic. The bar was closed, and bartenders in other craft lounges and restaurants weren’t serving, but at-home imbibers came to the rescue; sales in markets and liquor stores were strong.

“I think because Michiganders want to support local and they want to support those who helped them get through the pandemic, so that goodwill built up over time, and it’s paying off now for us on retail shelves all over the state,” Forsyth said. He said a third pandemic-related factor is the allowance of Michigan bars to sell carryout cocktails.

“All of us had to get creative,” he said. “We started bottling cocktails to-go because we couldn’t serve people here (at the tasting room), and that’s a product that is going to keep going forever, and those sorts of innovations allowed us to keep our staff employed.”

As for the future of Michigan’s craft spirit industry, with support from consumers and government, it looks like the only way to go is up. As more time passes, distillers will only get better at what they do, and spirits that are aging and becoming more complex in barrels and in storehouses right now will have their turn on shelves in years to come.

“Michiganders want to support Michigan-made spirits, and people know that if they support local, it is helping grow the economy,” Forsyth said. “It’s this really amazing local fanbase in Michigan for craft beverage drinkers and it’s a really fun place to be.”