You are the owner of this article.
Edit Article Add New Article
Home
News
Sports
Opinions
For the Record
Island Life
Classifieds
Best of the V.I.
Island Trader
1 of 2 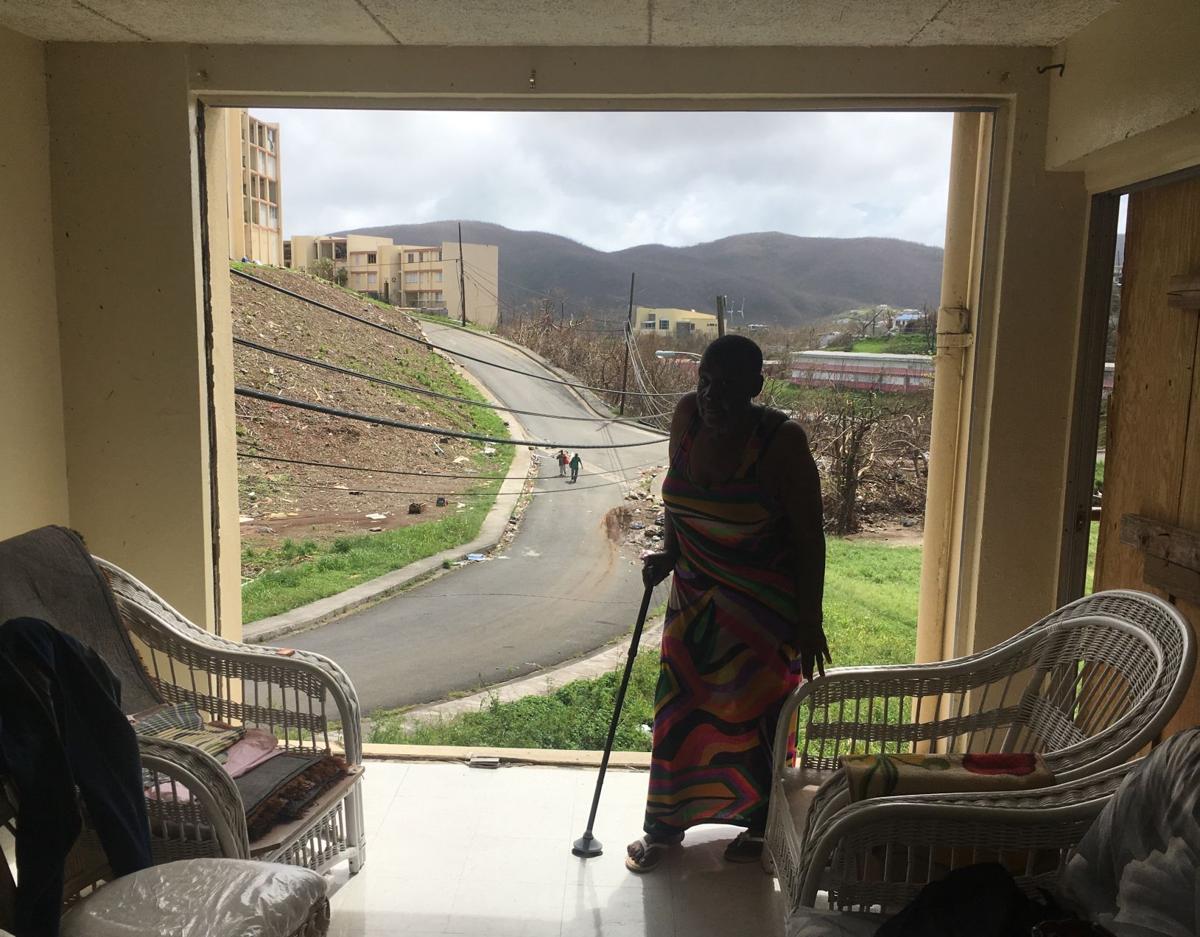 Leonise Greig-Powell, 75, stands in her blown out second-floor apartment at Tutu Hi-Rise, where she’s been living without water or electricity since Hurricane Irma hit nearly three weeks ago. 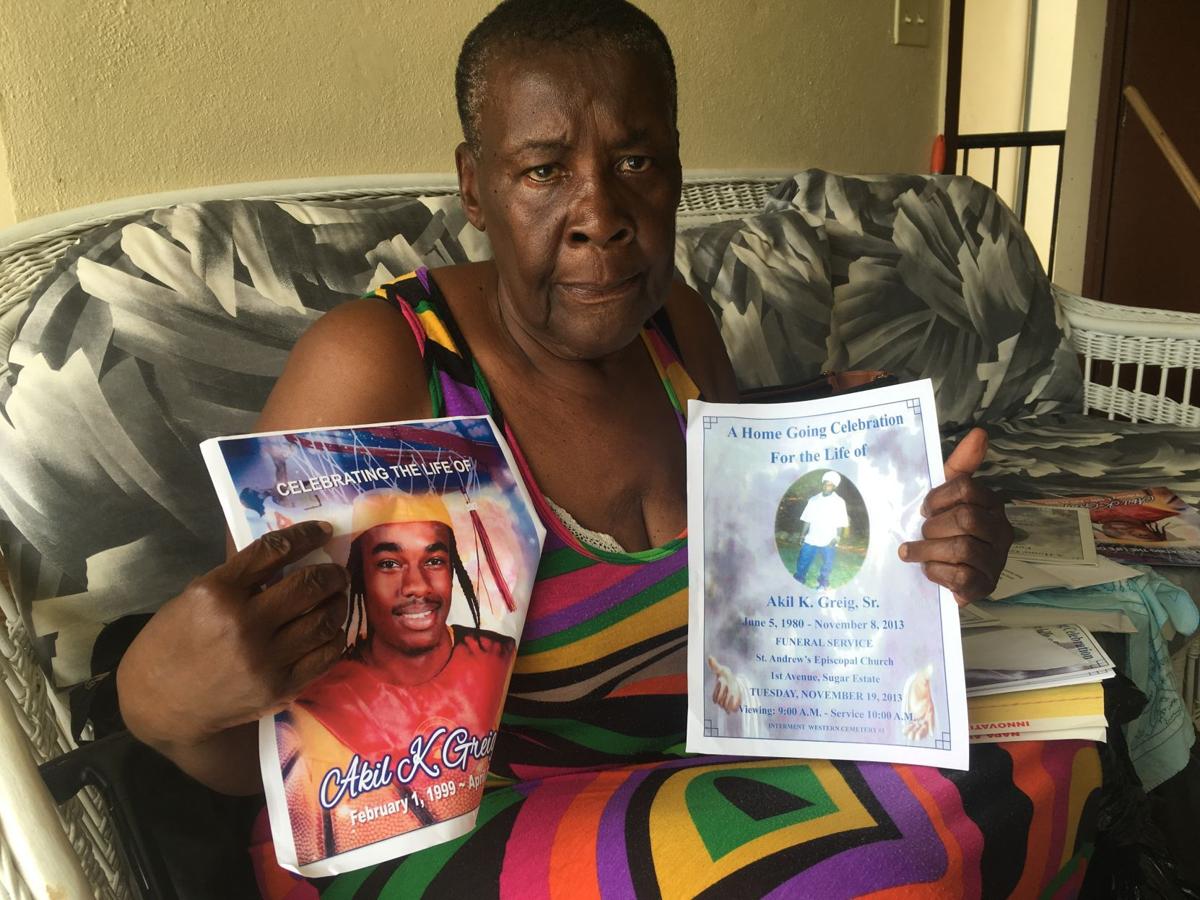 Leonise Greig-Powell, 75, holds up programs from the funerals of her son, Akil Greig Sr., and his son, Akil Greig Jr., who were both shot and killed on St. Thomas in separate incidents. Her other son, Henry Greig, was also shot and killed on St. Thomas years ago. Despite desperately wanting to leave, she is still living in her blown-out apartment at Tutu Hi-Rise housing community.

Leonise Greig-Powell, 75, stands in her blown out second-floor apartment at Tutu Hi-Rise, where she’s been living without water or electricity since Hurricane Irma hit nearly three weeks ago.

Leonise Greig-Powell, 75, holds up programs from the funerals of her son, Akil Greig Sr., and his son, Akil Greig Jr., who were both shot and killed on St. Thomas in separate incidents. Her other son, Henry Greig, was also shot and killed on St. Thomas years ago. Despite desperately wanting to leave, she is still living in her blown-out apartment at Tutu Hi-Rise housing community.

Nearly three weeks after Hurricane Irma hit, some residents on St. Thomas are still living in the blown-out wreckage of apartments at Tutu Hi-Rise without food, water, or power.

Born and raised in Trinidad, Greig-Powell said she’s a U.S. citizen who has been on St. Thomas for 40 years. She’s lived in Tutu Hi-Rise for more than seven years, despite having requested and been approved for a transfer to a different community to escape the area’s gun violence. Her husband, Vincent Powell, died three years ago and she lives alone.

Given her long history with gun violence, Greig-Powell’s doctor wrote letters to the V.I. Housing Authority in 2013 and again in 2015, asking that she be moved to a safer unit. Being in an area where she’s not “constantly exposed to the sound of gunshots near her apartment” would improve her mental and physical health, her doctor wrote.

The Housing Authority wrote her a letter on Feb. 29, 2016, saying her transfer request had been approved, and she would be placed on a waiting list.

She got so frustrated she went to the U.S. Attorney’s office for help, and was referred to a private lawyer. She made an appointment to speak to the lawyer, but then the hurricanes hit.

A friend tried to bring her to a shelter as Hurricane Irma approached, but Greig-Powell, who uses a cane and has limited mobility, said she didn’t think the storm would be that bad, and convinced the friend to stay at the apartment with her instead.

They cowered together in the bathroom as the outer walls of the apartment blew out around them and water began to rise around their ankles.

Sitting in her apartment Monday, she pointed out what used to be her living room wall to the hill where a woman’s body lay after being blown out of another building. The woman’s son covered her body in a sheet after people started taking photos, and it took two days before she was removed.

“You think in America that wouldn’t happen,” Greig-Powell said.

A small group of men who live downstairs cleaned the debris out of her apartment and brought furniture. Three days after Irma, Greig-Powell said she was lying in bed when a man walked into her unsecured apartment. She called out, thinking it was someone she knew, and the man retreated.

The experience rattled her, and the men downstairs nailed plywood across the blown-out entrance to help keep her secure. But bugs and rain still get into what is essentially now a second-story, open air shell of a building.

She stayed with a friend for three days during Hurricane Maria, but returned to her apartment and is surviving day by day.

The group of men who help her declined to be identified, but described the ongoing situation.

Federal relief agencies have been through sporadically with treats for area kids but “it wasn’t no food, just snacks,” one man said. No relief had been seen in the area in days, and what little that’s been given out didn’t last long.

They’re surviving on “whatever we have in our house left. Some of us did some shopping before the hurricane,” but transportation is nearly impossible and they’re not sure when more food might come.

They siphon water from the cistern and haul buckets up to Greig-Powell’s apartment so she can bathe and occasionally flush the toilet. They cook communal meals with what little they have left and bring her plates of food. They brought her a small propane burner so she can heat tea. They charge her cellphone in a car so she can speak to her daughters, Denise Greig, who’s serving in the Army in Germany, and Kimlyn Greig, who lives in New York City.

Both want to help their mother, but with the airport still closed and mail service suspended, there’s little they can do.

In the meantime, the men downstairs keep her safe and fed.

Some have left for shelters, others moved off-island to start new lives elsewhere.

As for him, “I have no clue. Right now, we’re just living. Sometimes we don’t even know what the day is. We just come out, see each other. Help each other make food or whatever.”

Greig-Powell said people stereotype residents of the Hi-Rise as violent thugs, but she said her “boys” are the only reason she’s still alive.

She called out former Tutu Hi-Rise property manager Sen. Marvin Blyden and V.I. Housing Authority Director Robert Graham for not helping her get out of the area sooner.

Graham could not be reached for comment, and Blyden said Tuesday he did everything possible in his management role to help her move, and is working to the point of exhaustion to help those in need.

He said he’s crisscrossing the island to bring generators, supplies, and help to those like Greig-Powell, but the need is overwhelming.

Still, Greig-Powell said she’s felt let down by the government.

“The ‘thugs’ that they would call are better than the senators that sit down there, because they come knock on your door: ‘Everything OK? Mami, you want water? Mami?,’” Greig-Powell said. “I could never, ever be ungrateful to those guys that you see sitting down there, they could do what they could say what, but they was more to me than the government.”

Greig-Powell said the stinking piles of trash and debris surrounding the Hi-Rise are a growing concern, as are the two pit bulls chained across the hall from her apartment, which lunge against their collars if anyone approaches.

Gov. Kenneth Mapp made a visit to the area, but didn’t approach the lower buildings.

“We down here is dogs, we didn’t see the governor at all,” she said. “It’s disgusting, it’s horrible. We like we in a Third World country.”

She said Mapp is “getting on the air, running his mouth,” but it’s apparent there’s no clear path forward for those like her. “They get on the air and say one thing and it’s nothing like that.”

She said politicians court residents of the housing communities for support during election season, but their needs are forgotten as soon as they leave the voting booth.

Greig-Powell said she’s cognizant of the fact that the damage caused by Irma and Maria will not be cleaned up overnight, and recovery will take time. But the wait is agonizing.

“I’m not pushing the government because I know it’s a crisis. But I’m supposed to leave here over three years ago and no one look at me, you know why? Because I’m black and I’m not from here. But I am a U.S. citizen. I’m not a Virgin Islander. And the U.S. government is supporting here, so I supposed to be treated as a U.S. citizen,” Greig-Powell said. “I am fair, we have to wait. But not in this condition.”