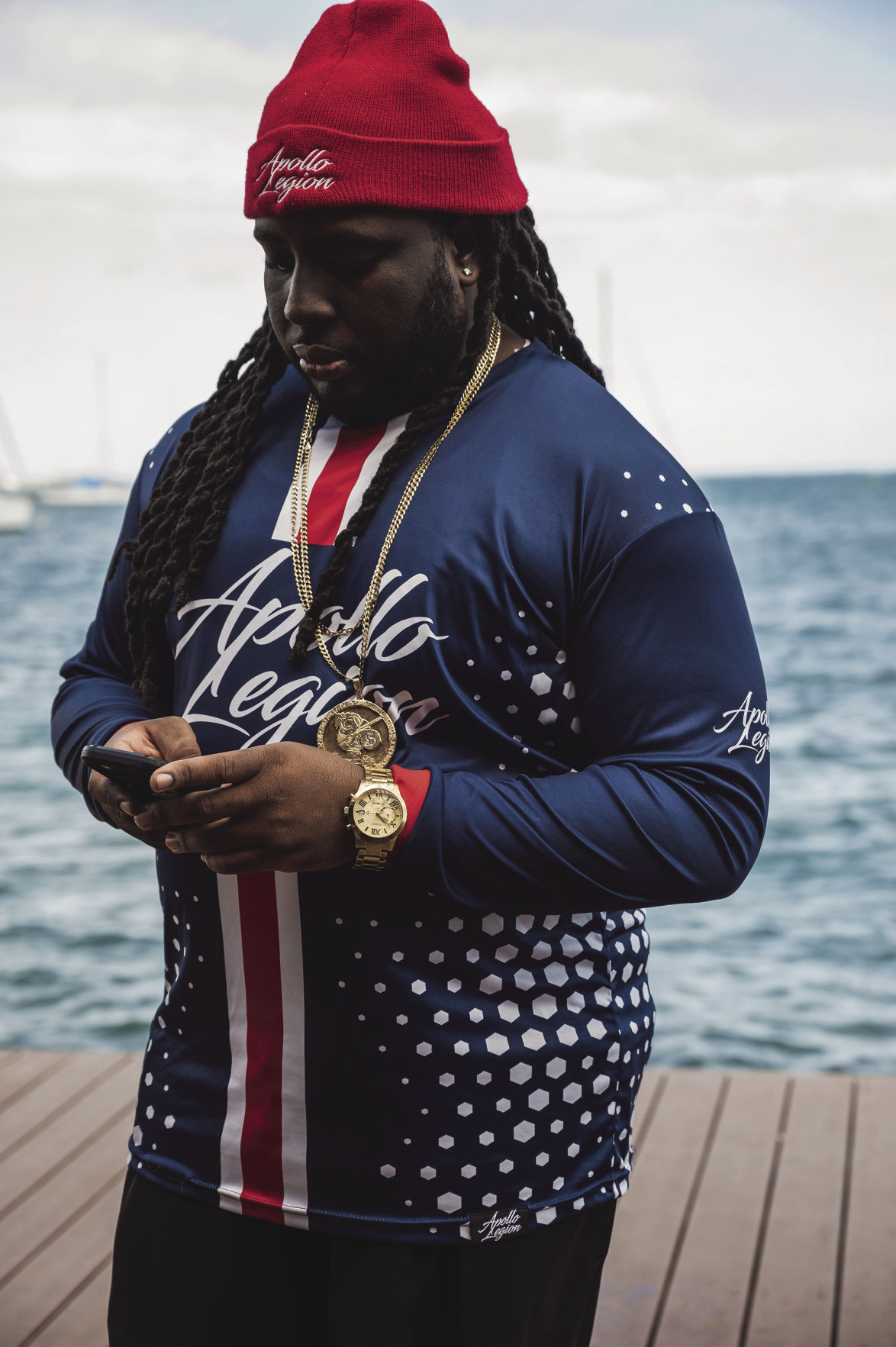 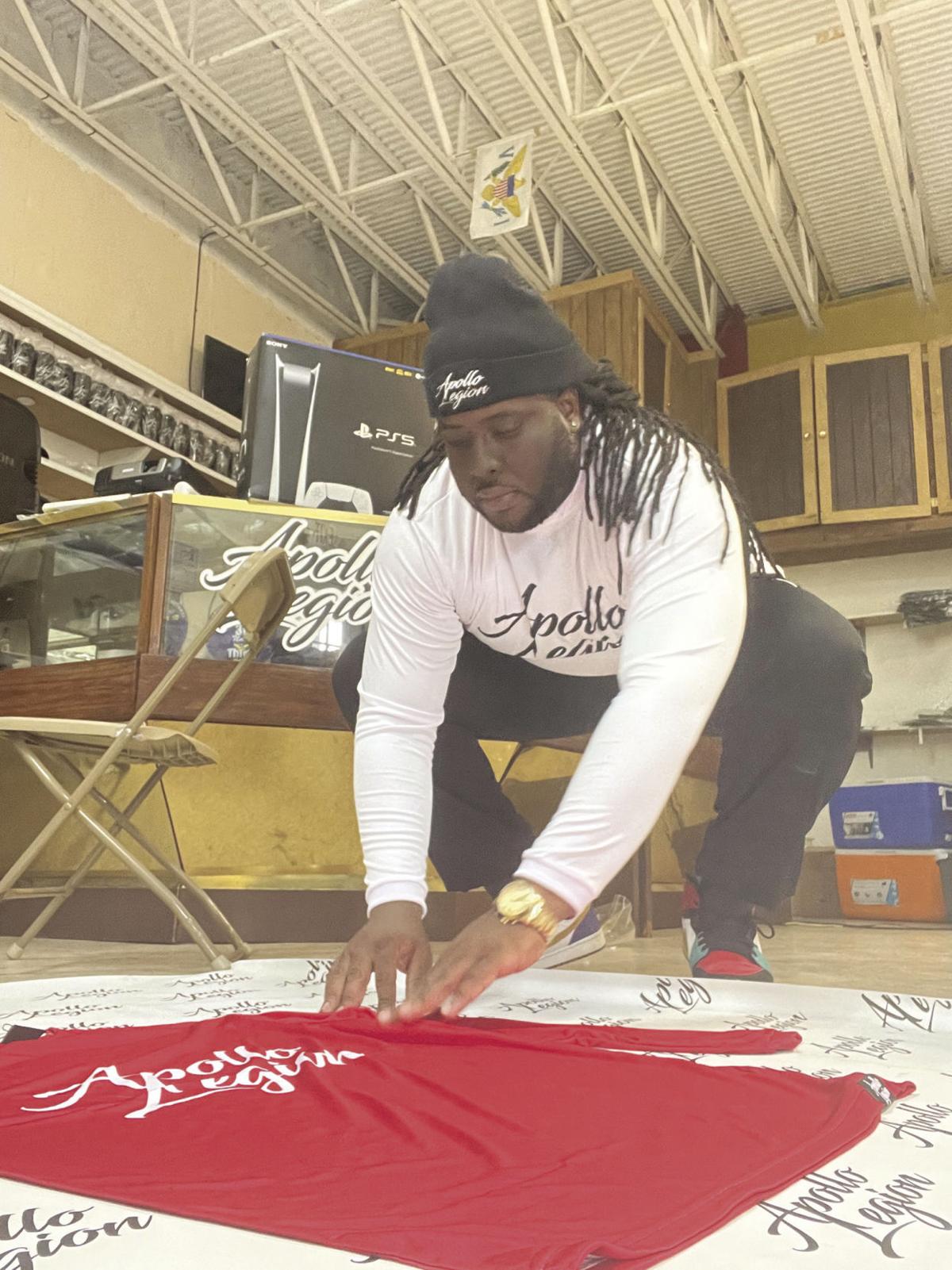 "Pollo" Goodings wraps a shirt for purchase at the Apollo Legion store in Castle Coakley on St. Croix.

"Pollo" Goodings wraps a shirt for purchase at the Apollo Legion store in Castle Coakley on St. Croix.

For Charles “Pollo” Goodings, Jr., Apollo Legion was always intended to be a clothing brand, not a t-shirt brand. From selling shirts out of the trunk of his car to his own brick and mortar store, Goodings now announces the grand opening of his new Legion Kicks section on Saturday.

Born and raised on St. Croix, Goodings always liked graphic t-shirts with meaningful messages behind them. His first foray into clothing was actually a promotion for his career as DJ Pollo. The “Pollo Run Tune Stop Frassing” shirt turned into a local trend, initially done in different colors to match his shoes. When someone suggested he start his own clothing line, Goodings decided “If I do it, I have to do something serious. I want to come hard and definitely make a statement in the world. If I’m going to go, go big or don’t go at all. The mission was always to be a brand, not just a t-shirt line.”

After more than six months of research, he came up with the name Apollo Legion. Although he wanted his name subliminally included, he did not want to be the face of the brand. By prefacing his nickname “Pollo,” which means “chicken” in Spanish, with the letter A, it became Apollo, a name with deep symbolism.

“Apollo was a Greek god who was also a musician, which is also very ironic, because he played a stringed instrument, the lyre, which is like a mini harp, and I play six string bass guitar,” said Goodings. “The name Apollo also has a certain class representation. Apollo created one of the best boxers, Showtime at the Apollo had some of the best entertainers ever, and the Apollo landed on the moon, showing that we, as humans, can break barriers. We are limitless people. Legion means a large body of people. It also means the elite of a certain kind. I wanted it to be unifying and suitable for all ages.”

Goodings started selling merchandise out of the trunk of his car in 2016 between classes during his senior year at the University of the Virgin Islands. He graduated in 2017 with a Bachelor’s degree in mass media communications. He would also sell at different events such as the Agricultural Fair and during Jump Up in Christiansted, and eventually, sold on consignment at a number of different St. Croix stores.

After two years, Goodings decided to take the next step and open his own store in Frederiksted in 2018, and moved to his current location in Castle Coakley in 2019. He launched his Apollo Legion website three years ago.

This year, Goodings decided to expand the business by launching an athletic shoe section that will specialize in reselling athletic shoes. Apollo Legion will special order any limited edition, custom made or even everyday shoes that can be bought off the shelves, and have it available in a timely manner.

“I’ve dedicated a section of the store to the reselling of sneakers by special order,” he said. “I’ll have a few every so often of different ones that are coming out, but for now, that’s how the operation will continue until I can get a bigger store. The first sneaker we’re going to start out with is the Jordan 11 Jubilee in black and white. I brought in a couple and it’s going to be ready for the grand opening of that section of the store on Saturday.”

Although Goodings is not ready to invest in his own brand of athletic shoe just yet, it’s in his plans for the future. First, he is in the process of creating an Apollo Legion line of jeans as well as underwear for women and children. He has also been supplying uniforms for some businesses and government agencies such as the V.I. Department of Sports, Parks and Recreation and Quick Serve Gas Station.

“This started in 2016, so this year is going to be five years. I still can’t believe it to this day. I can’t express how grateful I am for the friends and customers, the ones that have supported me literally from day one and even the new ones coming in. It’s something I put 150 percent into.”