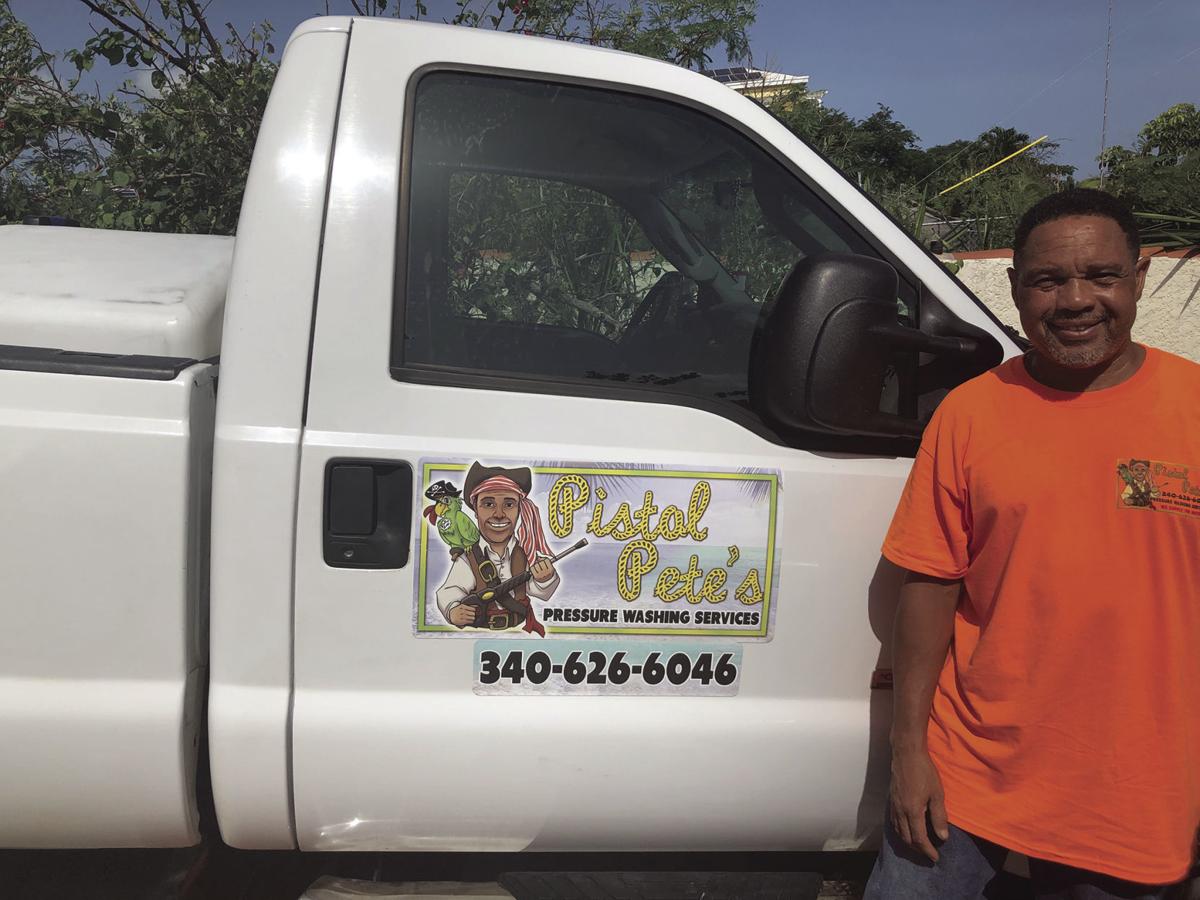 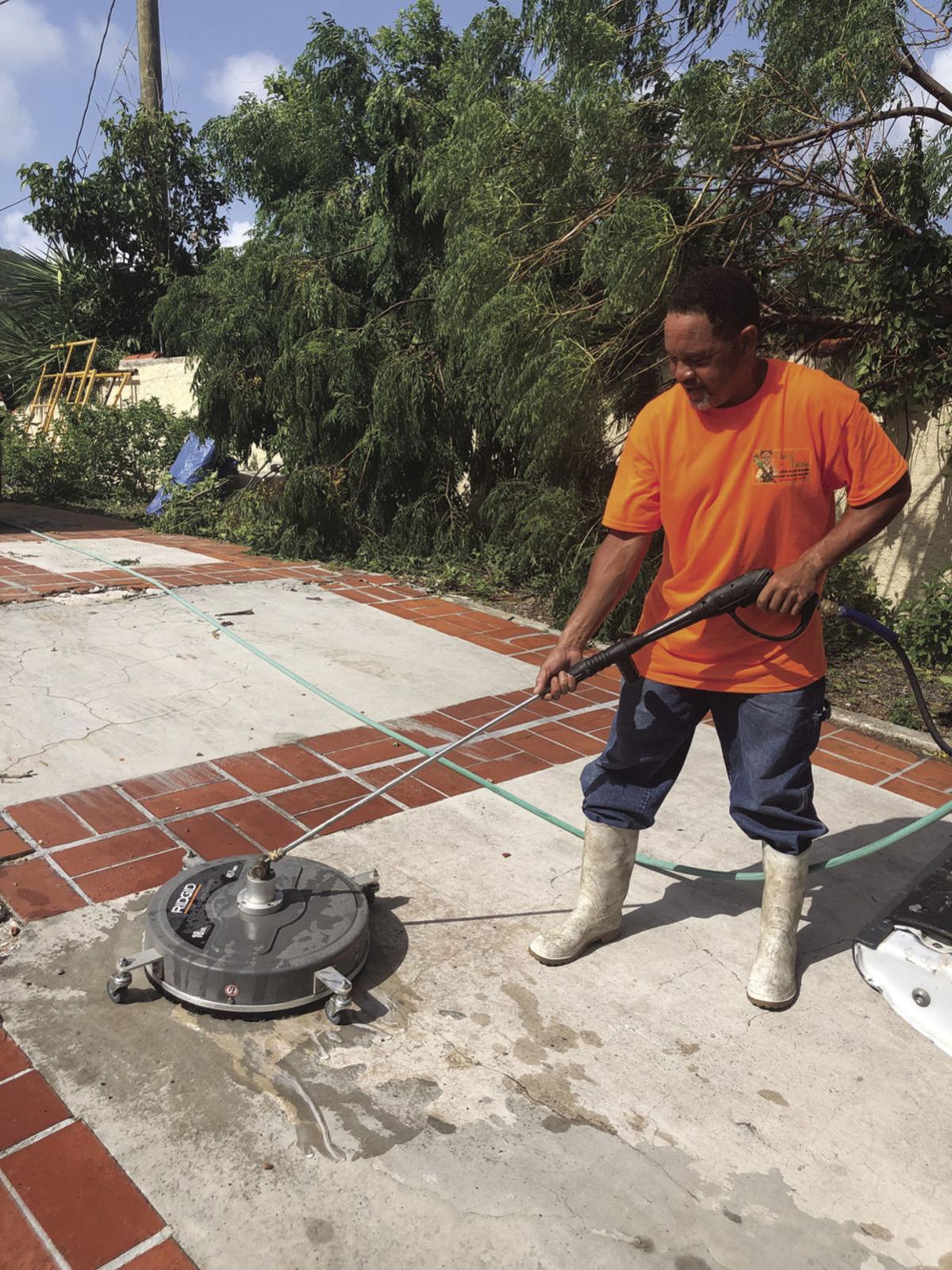 ST. THOMAS — Hurricane Dorian was nothing new for Peter James, owner of the new Pistol Pete’s Power Washing Services on St. Thomas. He and his family survived Hurricane Katrina in New Orleans, La., in 2005, and can certainly empathize with those of us who went through hurricanes Irma and Maria.

Originally from Chicago, Ill., James graduated from Aurora University and worked at the Illinois Department of Corrections before moving to the New Orleans home of his wife, Avus James. For almost 25 years, James worked in automotive sales.

Their hurricane story seems hauntingly familiar. As Hurricane Katrina approached, Pete and Avus James packed up their two cars, their four-year-old daughter, Bailey, a dog and a turtle for evacuation.

“I walked with just the shoes on my feet, thinking we would be gone for a weekend,” said Avus James.

The closest place to stay was a Motel 6 four hours away in Marshall, Texas, where they were forced to stay for a month, dependent on church groups and other community organizations for hot meals, as were so many displaced by Katrina.

When they were finally able to get back to New Orleans, “we decided whoever’s house is still standing, that’s where we’ll all go as a family,” said Avus James. Unfortunately, their house, her mother’s house and her sister’s house were all flooded.

It took a month with friends in Baton Rouge, time in a one-bedroom apartment in Metorie, a suburb of New Orleans, and a two-hour commute to work for Peter James before they could return to their home. As for Avus James, a secretary at the Southern University at New Orleans, there was no university to return to after the storm.

“Katrina changed a lot of things,” she said.

The first in the neighborhood to return to their property, the James’ bought houses in the area from those who decided to move out of New Orleans to fix up and flip in the housing market.

It was their daughter Bailey who prompted the move to St. Thomas. Having attended a very small school all of her life (she was the valedictorian in a class of nine students), she and her parents were looking for a small college with more one-on-one attention for her to attend in the area surrounding New Orleans. Peter James’ mother, Josephine James, who has lived on St. Thomas for more than 45 years, suggested that they consider the University of the Virgin Islands. In the end, the family moved to St. Thomas two months ago, and Bailey has started her studies at UVI.

As Avus James settled the family into their new home, Peter James decided to make another drastic change.

“This is my retirement,” he jokes. “I took my life savings and decided to go a different route. This was a good opportunity to do something totally different. It just hit me that during Katrina and even before that, on the car lot, I had access to pressure washers and often cleaned cars and the lot. I like to be outdoors and I like the physicality of it.”

Peter James brought all of his equipment with him from New Orleans and by the time the family arrived on St. Thomas, he already had all of his permits and licenses in place for Pistol Pete’s. After first pressure washing his mother’s property, where he and his family live, he started handing out business cards two weeks ago.

Peter James’ truck is equipped with 300 gallons of water and a total of 400 feet of hosing, a surface cleaner and a wand extender to reach the top of most roofs. He is able to pressure wash cars, houses, buildings being prepared for painting, parking lots, boats, bars, beach areas, sidewalks, the fronts of businesses, anything that needs a good cleaning. He completed his first gas station on island last week.

Peter James realizes most businesses cannot afford to close while getting their building pressure washed, and he will work with business owners to do the job during off hours, whether that’s early morning or late at night. Ask to meet him for an estimate. Prices depend on how long it would take to do the job and whether the customer can provide the water or he has to use his own.