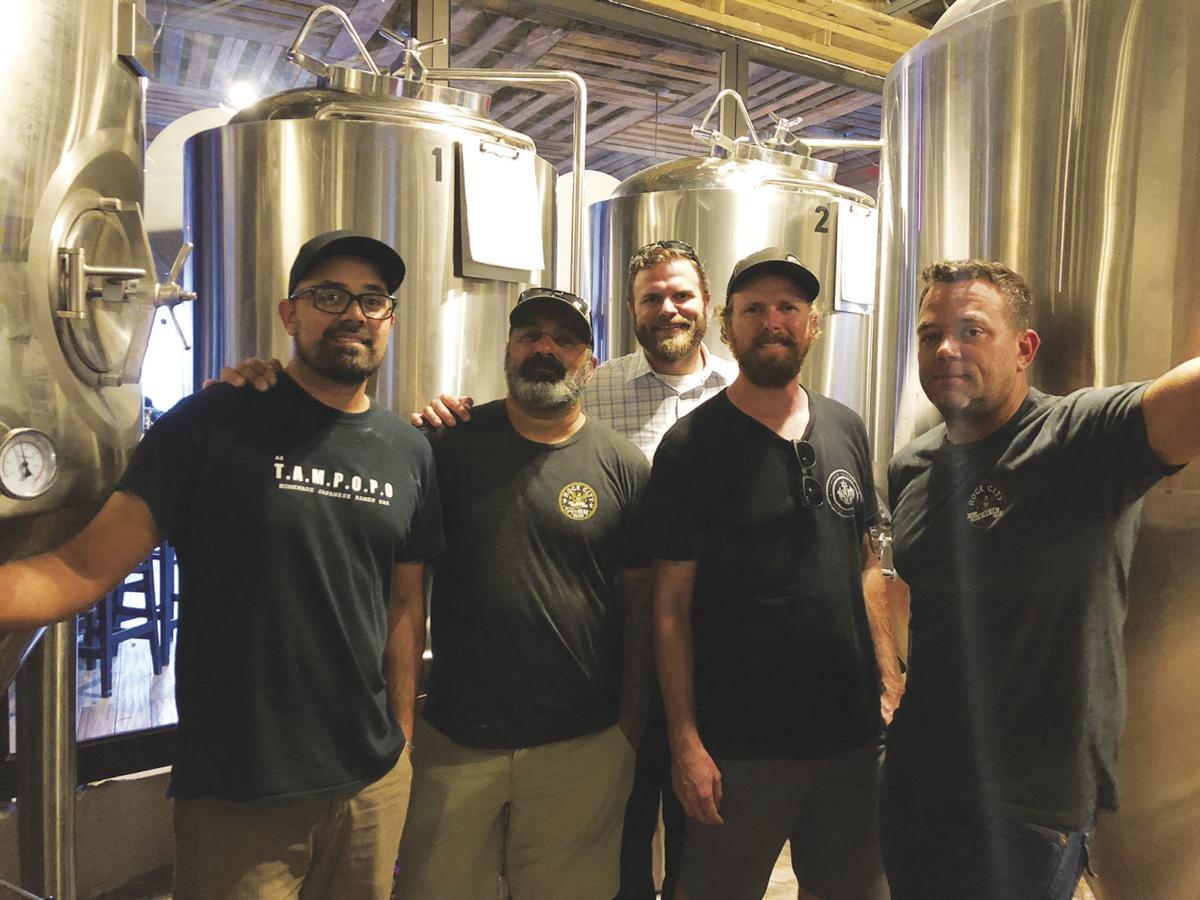 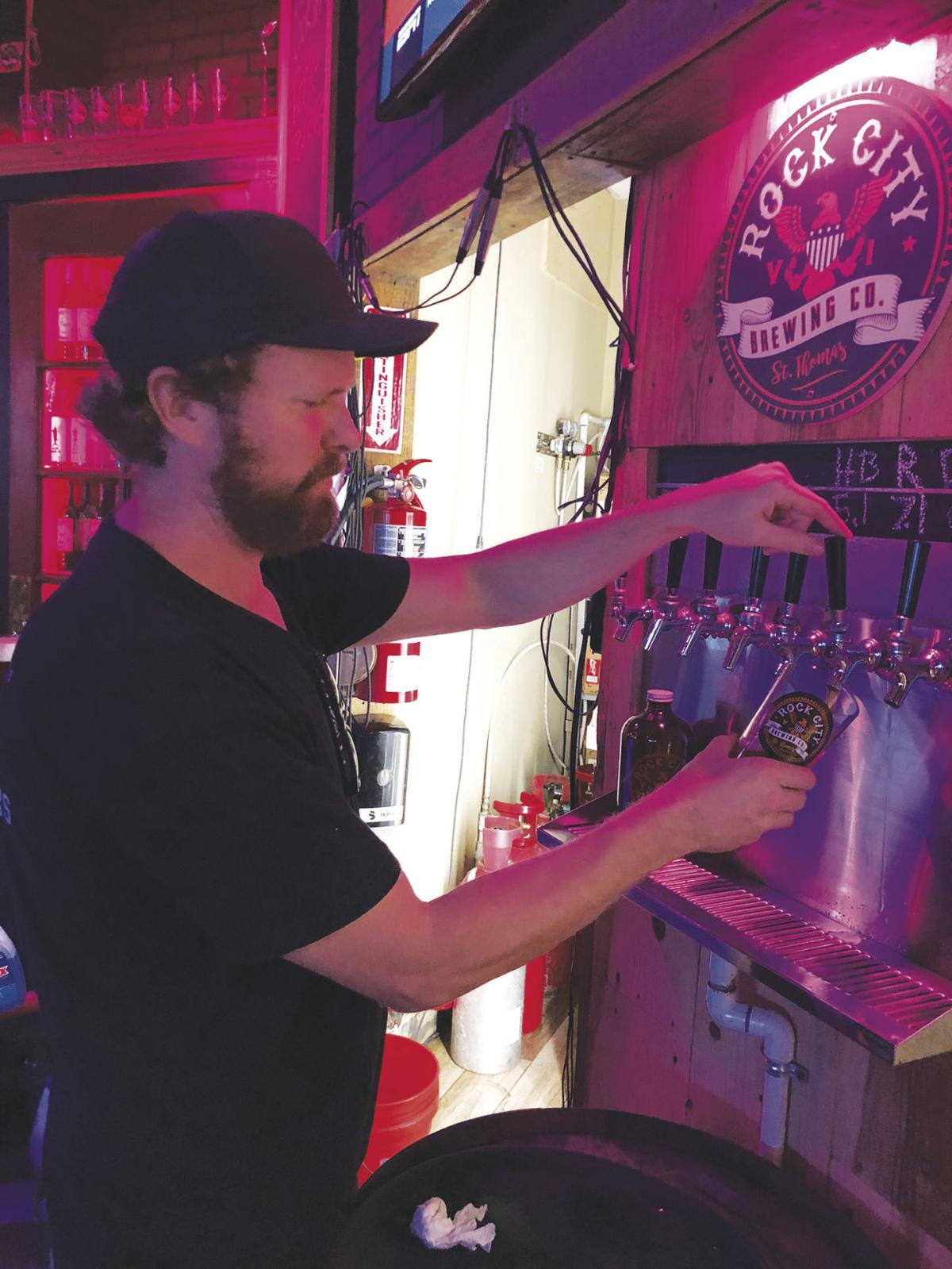 ST. THOMAS —When people purchase a local product, they may have to read the fine print to determine whether it’s actually made on island or manufactured or packaged elsewhere. Beer from Rock City Brewing Company is the real deal, and customers can watch them making their craft beers while enjoying a cold brew on tap.

Rock City Brewing Company was created by four partners with a wide range of business experience.

Hooman Pedram is the owner of three Tap & Still restaurants and Chicken & Bowling. He wanted to start a distillery as an attraction for cruise ship passengers, but found his business ventures took much of his time. Meanwhile, the Brugos brothers, Joe and John, were operating Virgin Islands Craft Distillers, a small batch distillery in the Gregorie East Marina on St. Thomas, handcrafting vodka, rum and gin. They brought in a fourth partner, Mario Austin, a local rental car franchise owner, to form Rock City Brewing Company within the Tap & Still site in Havensight Mall.

The Brugos brothers had been home brewing beer for years, and won a 2013 home brewing competition in Coral Bay, St. John. That recipe, named Dumpster Cock, remains one of their best sellers.

The brewery is enclosed in a clear glass room within Tap & Still. Customers can watch as the beer is being brewed, a unique “Made in the V.I.” product popular with visitors looking for authentic island experiences.

“Next season is supposed to see the largest number of cruise ship passengers in 10 years,” said Pedram. “We sell more beer when we’re brewing, because they can see it being made here and watch the people actually doing it.”

Rock City beers can only be found on tap at Tap & Still and Chicken & Bowling, but even with this limited distribution, the team found it hard to keep up with the demand. They recently added three new 10-barrel fermenters that will allow them to add more types of beer and more volume.

At any one time, Rock City offers a lager, an IPA, an Irish red and a seasonal brew. Their popular Hull Bay Beach lager is a Mexican-style beer. The Dumpster Cock “VIPA” is a West Coast-style IPA and the Red Hook Rosé is a classic Irish red ale.

Brewing seasonal beers is where brewmaster John Brugos gets creative. The Rocktoberfest Marzen, a German brown lager, was just released and is selling out rapidly. In June or July, you might sample their Speedbump Pineapple Wheat, literally made with juice from pineapples sold by the side of the road on St. Thomas. Other seasonals include Cockfight Double IPA, Laughing Gull Summer Wheat and Humpback Hefeweizen.

“We get to have fun and make something new and different, and it keeps everybody else interested, too,” said Joe.

Rock City has been producing beer since June of 2016 and not even two Category 5 hurricanes in September 2017 could stop the team for long. Luckily, only one compressor was damaged and Tap & Still was one of the first restaurants to open after the storms. Some beers had to be dumped and they lost all of their grain, but they were up and running again almost immediately.

“Some beers survived and we had beer on tap by the end of September,” said Pedram.

New on the horizon is a different kind of expansion. The lease has just been signed for a separate tap room and merchandise outlet just across the parking lot from Tap & Still. They will also soon be canning in small batches, approximately 50 cases at a time, to offer Rock City beers on the go. The tap room, which will open in a couple of months, will feature T-shirts, hats, growlers and other Rock City logo items.

The long-range plan is to make Rock City Brewing Company as iconic to the Virgin Islands as Banks is to Barbados and Red Stripe is to Jamaica.

“We want to go big,” said John. “That’s our ultimate goal, but we want to remind people that it’s a local brewery.”