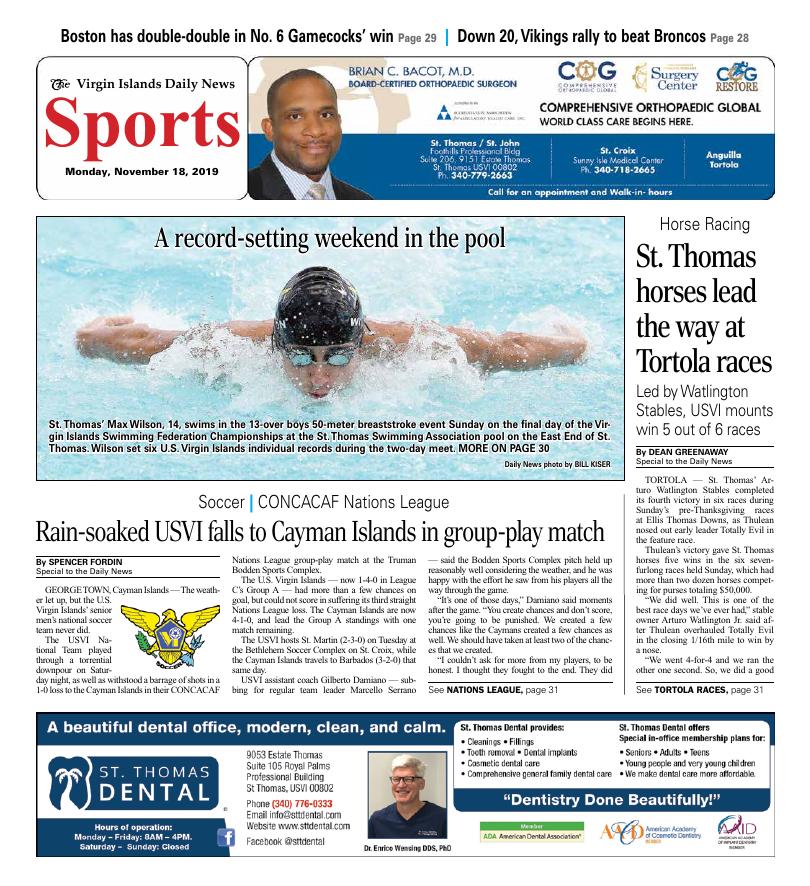 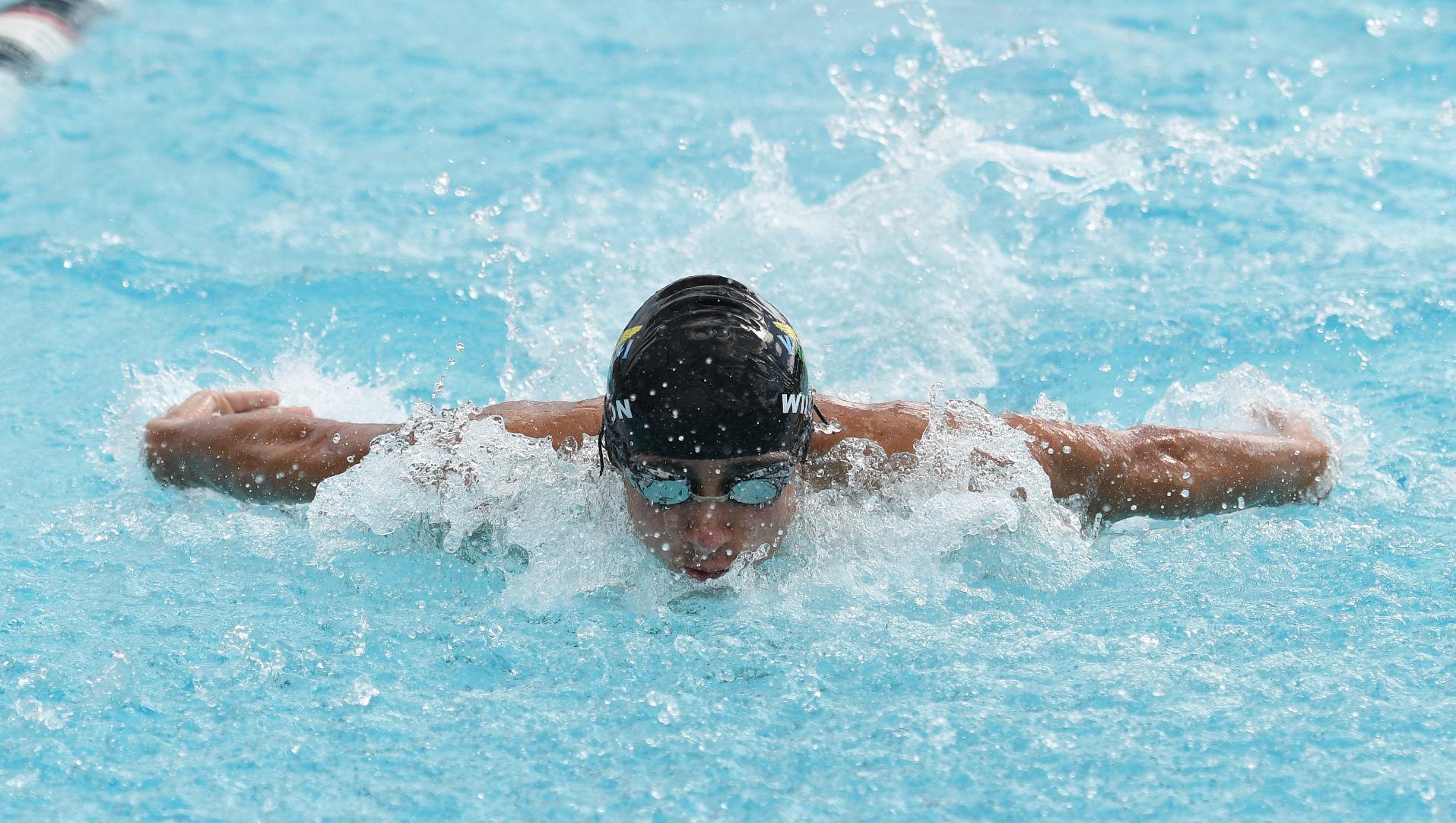 A record-setting weekend in the pool

The USVI National Team played through a torrential downpour on Saturday night, as well as withstood a barrage of shots in a 1-0 loss to the Cayman Islands in their CONCACAF Nations League group-play match at the Truman Bodden Sports Complex.

The U.S. Virgin Islands — now 1-4-0 in League C’s Group A — had more than a few chances on goal, but could not score in suffering its third straight Nations League loss. The Cayman Islands are now 4-1-0, and lead the Group A standings with one match remaining.

The USVI hosts St. Martin (2-3-0) on Tuesday at the Bethlehem Soccer Complex on St. Croix, while the Cayman Islands travels to Barbados (3-2-0) that same day.

USVI assistant coach Gilberto Damiano — subbing for regular team leader Marcello Serrano — said the Bodden Sports Complex pitch held up reasonably well considering the weather, and he was happy with the effort he saw from his players all the way through the game.

“I couldn’t ask for more from my players, to be honest. I thought they fought to the end. They did exactly what we asked them to do.”

The first half of Saturday’s match was played in a driving rain, with several players slipping as they tried to maneuver on the slick field.

The USVI National Team controlled 40 percent of the possession and passed with 85 percent accuracy on Saturday night, but only managed three shots — just one on goal — over the course of the game. Meanwhile, the Cayman Islands had 10 shots (four on goal), and only put one in, by Jonah Ebanks in the 75th minute.

U.S. Virgin Islands midfielder Aaron Dennis said the team effort was much better than it was last month against Barbados, when the USVI lost twice in a four-day span.

“Obviously, we’re out of the running to compete for the group,” Dennis said. “But for me, I thought we played better today compared to last month against Barbados. We gave up five goals in the two games, so to only concede one [against the Cayman Islands] is good.

“We created chances, which we didn’t do last month, but we’ve got to put them away. I can’t say I’m mad at the team or anything.”

Said USVI forward Raejae Joseph: “We played good, we just didn’t capitalize on our chances. It’s football. They wanted it more than us.”

Damiano said the USVI National Team has worked hard to perform on the biggest stage, and even if it hasn’t shown in the standings, he said the Nations League has been a great boon for his players.

“It has changed the whole face of soccer,” Damiano said. “There is more opportunity now for the young players to play international games and to be seen.

“There are so many talented players in the islands. They deserve an opportunity. Hopefully we can develop some players that will become professional players in the future.”

“We did well. This is one of the best race days we’ve ever had,” stable owner Arturo Watlington Jr. said after Thulean overhauled Totally Evil in the closing 1/16th mile to win by a nose.

“We went 4-for-4 and we ran the other one second. So, we did a good job, a very, very good job. I don’t think anybody has won four races before.”

Thulean, ridden by jockey Angel Moreno, won the $12,000 main event in 1 minute, 29.1 seconds. Tortola duo Salsa Jack and Courage And Honor duked it out before fading to third and fourth, respectively.

Moreno said he followed the instructions given by trainer Laquan Charleswell, and he knew Totally Evil was the fast horse and he followed him around after he took the lead from the gate.

“I tried to do the best I can and we got the job done,” Moreno said. “At the top of the stretch, coming to the 16th I knew I had them then. My horse was running good and the track was holding good so that helped me a lot to do it.”

“I’m feeling great and the people are taking good care of me,” Moreno said. “We’re having fun and we’ve won some races. Thank God for giving me the opportunity and the guy are working hard so it was a good day.”

Preceding the main event, in the fifth race for Class B horses, the Tortola duo of One Way To Fame and Chovanes went at each other from the start, after both raced to a dead head in their last outing. However, St. Thomas’ Barrabas Key laid off the pace in the $9,000 race early, then made its move on the backstretch.

By the top of the stretch, Barrabas Key had run past the duo, which faded badly, and went on to a convincing eight-lengths victory in 1:29.0.

“They told me let him run and if Chovanes want to take the lead let him, just sit back and make one run and that’s what I did,” Barrabas Key jockey Carlos Marquez said. “They went at it and I just sat perfect and I had a lot of horse and when I asked him, he just leveled off nicely. When I let him go, he ran away.”

St. Thomas’ Puttingonashow took control on the backstretch in the third race, the $7,000 for Class B non-winners and Class C horses, by running past early leader Formal Talent for a three-lengths victory over St. Thomas counterpart Bit Growth.

Puttingonashow won in 1:30.2, with Hernandez in the irons for his second victory. My Running Mate completed a St. Thomas sweep. Formal Talent faded to fourth ahead of debutant WW Handsome.

In one of the most exciting races between Tortola horses, Special Counsel took control of the $8,000 race for mares and fillies from Holy Giacomo, then opened a lead heading off the top of the stretch.

However, the effort Special Counsel used to pass might have been too much, as jockey Carlos Marquez whipped Holy Giacomo back into the lead in the final furlong, sprinting past fading Special Counsel to win in 1:30.2. 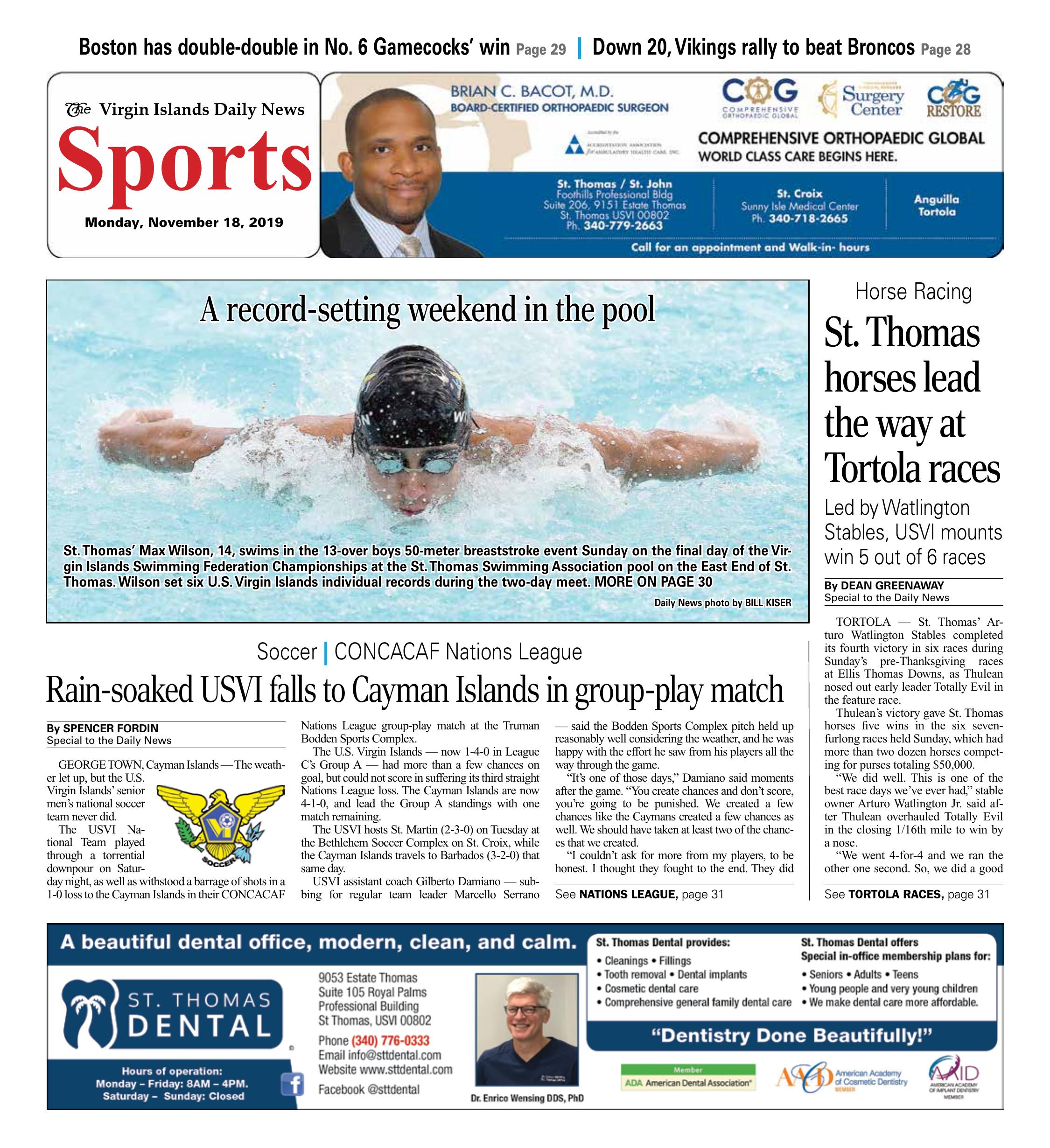