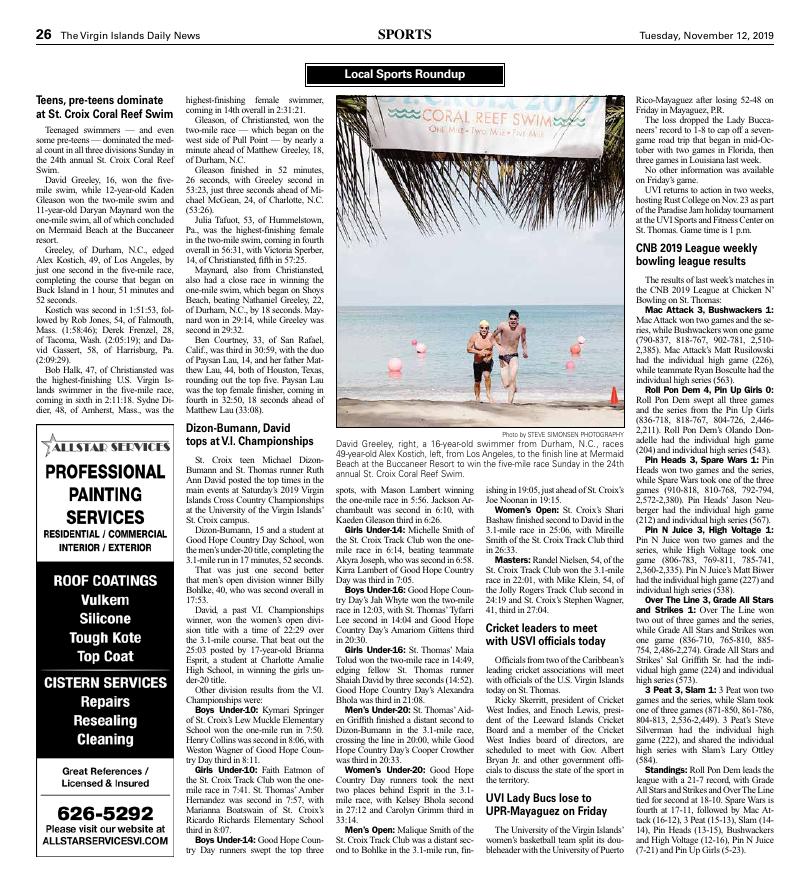 Teenaged swimmers — and even some pre-teens — dominated the medal count in all three divisions Sunday in the 24th annual St. Croix Coral Reef Swim.

David Greeley, 16, won the five-mile swim, while 12-year-old Kaden Gleason won the two-mile swim and 11-year-old Daryan Maynard won the one-mile swim, all of which concluded on Mermaid Beach at the Buccaneer resort.

Greeley, of Durham, N.C., edged Alex Kostich, 49, of Los Angeles, by just one second in the five-mile race, completing the course that began on Buck Island in 1 hour, 51 minutes and 52 seconds.

Gleason, of Christiansted, won the two-mile race — which began on the west side of Pull Point — by nearly a minute ahead of Matthew Greeley, 18, of Durham, N.C.

Julia Tafuot, 53, of Hummelstown, Pa., was the highest-finishing female in the two-mile swim, coming in fourth overall in 56:31, with Victoria Sperber, 14, of Christiansted, fifth in 57:25.

Maynard, also from Christiansted, also had a close race in winning the one-mile swim, which began on Shoys Beach, beating Nathaniel Greeley, 22, of Durham, N.C., by 18 seconds. Maynard won in 29:14, while Greeley was second in 29:32.

Dizon-Bumann, 15 and a student at Good Hope Country Day School, won the men’s under-20 title, completing the 3.1-mile run in 17 minutes, 52 seconds.

That was just one second better that men’s open division winner Billy Bohlke, 40, who was second overall in 17:53.

David, a past V.I. Championships winner, won the women’s open division title with a time of 22:29 over the 3.1-mile course. That beat out the 25:03 posted by 17-year-old Brianna Esprit, a student at Charlotte Amalie High School, in winning the girls under-20 title.

Other division results from the V.I. Championships were:

Boys Under-14: Good Hope Country Day runners swept the top three spots, with Mason Lambert winning the one-mile race in 5:56. Jackson Archambault was second in 6:10, with Kaeden Gleason third in 6:26.

Girls Under-14: Michelle Smith of the St. Croix Track Club won the one-mile race in 6:14, beating teammate Akyra Joseph, who was second in 6:58. Kirra Lambert of Good Hope Country Day was third in 7:05.

Men’s Under-20: St. Thomas’ Aiden Griffith finished a distant second to Dizon-Bumann in the 3.1-mile race, crossing the line in 20:00, while Good Hope Country Day’s Cooper Crowther was third in 20:33.

Women’s Under-20: Good Hope Country Day runners took the next two places behind Esprit in the 3.1-mile race, with Kelsey Bhola second in 27:12 and Carolyn Grimm third in 33:14.

Officials from two of the Caribbean’s leading cricket associations will meet with officials of the U.S. Virgin Islands today on St. Thomas.

The University of the Virgin Islands’ women’s basketball team split its doubleheader with the University of Puerto Rico-Mayaguez after losing 52-48 on Friday in Mayaguez, P.R.

The loss dropped the Lady Buccaneers’ record to 1-8 to cap off a seven-game road trip that began in mid-October with two games in Florida, then three games in Louisiana last week.

No other information was available on Friday’s game.

UVI returns to action in two weeks, hosting Rust College on Nov. 23 as part of the Paradise Jam holiday tournament at the UVI Sports and Fitness Center on St. Thomas. Game time is 1 p.m.

The results of last week’s matches in the CNB 2019 League at Chicken N’ Bowling on St. Thomas: 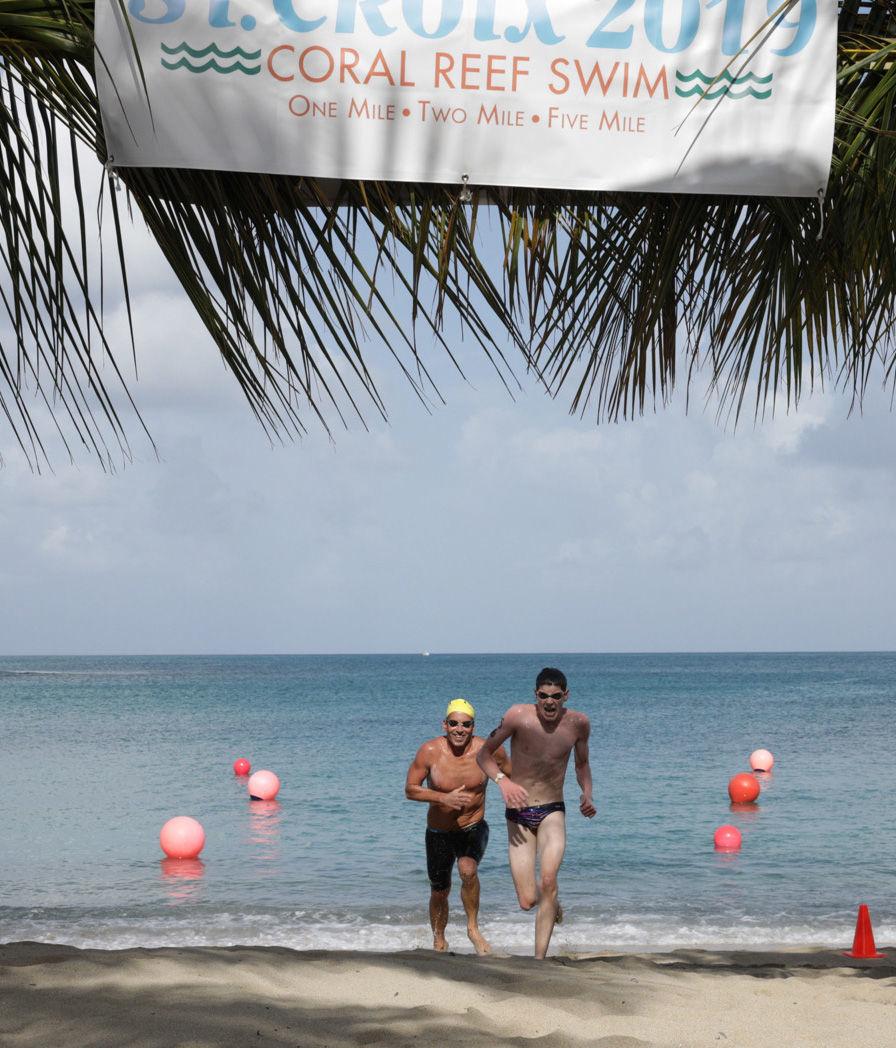 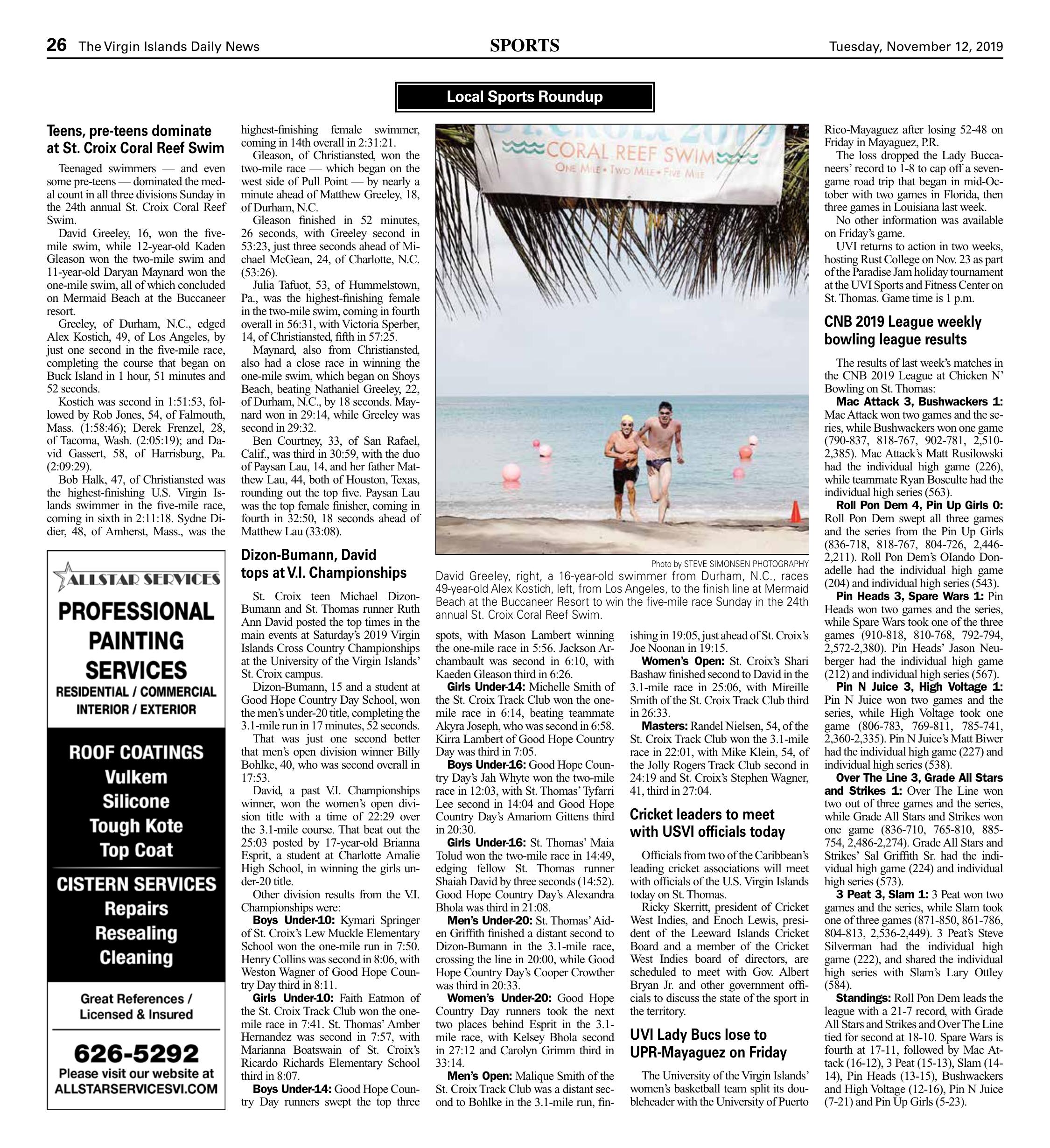