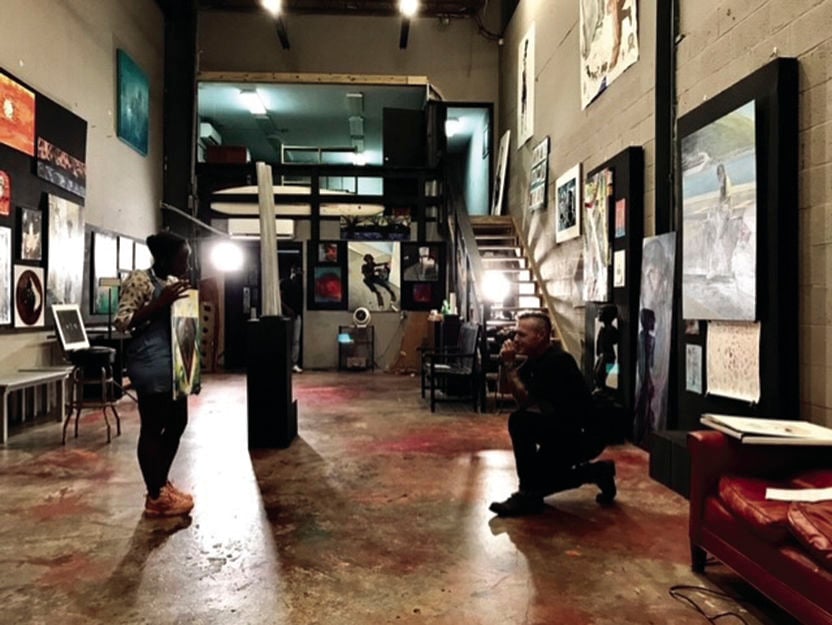 Chunkii George, left, and Clay Jones display a piece of artwork for the virtual tour of “The Joy Inside Our Tears” exhibit at the sevenminusseven gallery on St. Thomas. 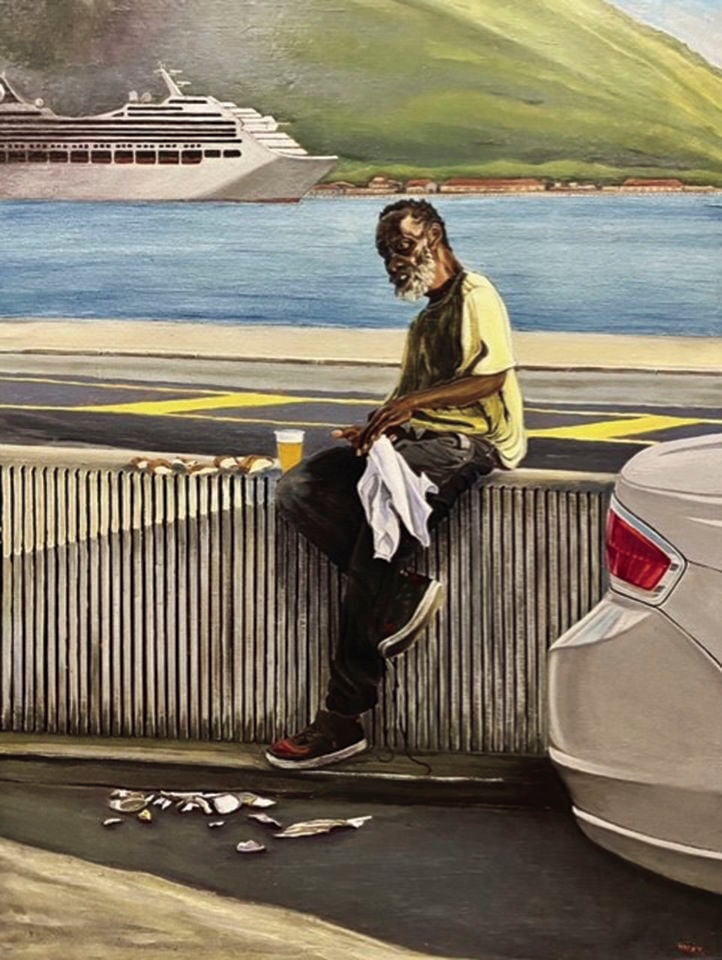 “Insolation and Exposure” by Steve Counselman

Chunkii George, left, and Clay Jones display a piece of artwork for the virtual tour of “The Joy Inside Our Tears” exhibit at the sevenminusseven gallery on St. Thomas.

“Insolation and Exposure” by Steve Counselman

Despite rain, the threat of a tropical storm and COVID-19 restrictions, the voices of the sevenminusseven art collective will not be denied. After three attempts to offer their art exhibit, “The Joy Inside Our Tears,” they are now taking it online with their first-ever virtual exhibit tour.

Originally scheduled for July, the exhibit was postponed because of an approaching tropical storm. Two more dates, Aug. 1 and Aug. 15, were also postponed due to weather. They are now opening up the show to small groups to allow for social distancing and public health, and the virtual tour, shot by videographer Keryl Liburd of Aperture VI, was launched Monday.

“The Joy Inside Our Tears” features works that were created since COVID-19 quarantines and restrictions were put in place. The objective behind the exhibit is to collectively share the emotions felt by the artists, the community and the world at large during the pandemic, using art as a coping mechanism — a creative outlet to express the anger, frustration, fear, anxiety and the uncertainties many are feeling.

“A lot of us were in quarantine and we all have a lot of emotions about it, and a lot them are coming into play, so the mission behind the exhibit was an artistic, cathartic expression of how you feel about it,” said sevenminusseven’s Joseph Hewes. “What did you do? What did you think of it? How did you express your feelings? It allows the artist to express themselves, and then some audience member may see it and say, ‘I know what that feels like because I feel the same way.’ So it’s really mutually beneficial.”

The virtual tour is hosted by Hewes, founder Clay Jones and fellow artist Chunkii George. As they tour the exhibit, they single out a number of works, explaining the medium and the artist’s motivation behind the piece.

“An artist is someone who paints so that they can live and expresses their interpretation of the human condition so that they can cope with it,” said Hewes. “An artist is someone who has that undeniable, unfiltered need for expression. That being said, there are a number of pieces here by people who have never picked up a brush before, and they just instinctively turned to it.”

The collective, formed in 2008 by Clay Jones, believes the message of this exhibit was important enough that it was worth the effort to bring it to viewers through a virtual tour, since many viewers can’t come to see it in person.

“This show is one of the best we’ve ever had, with more than 30 artists from here and off-island as well,” said Jones. “The virtual tour is the first time we’ve done anything like that, and the technology is there, so we’re going to take advantage of our people that are working with us that are very good at this sort of thing. I’m very proud of the way we put it all together.”

In addition to the new online platform, sevenminusseven is planning another exhibit sometime in early November that will be open to the public. To view the online exhibit, visit sevenminusseven.org.