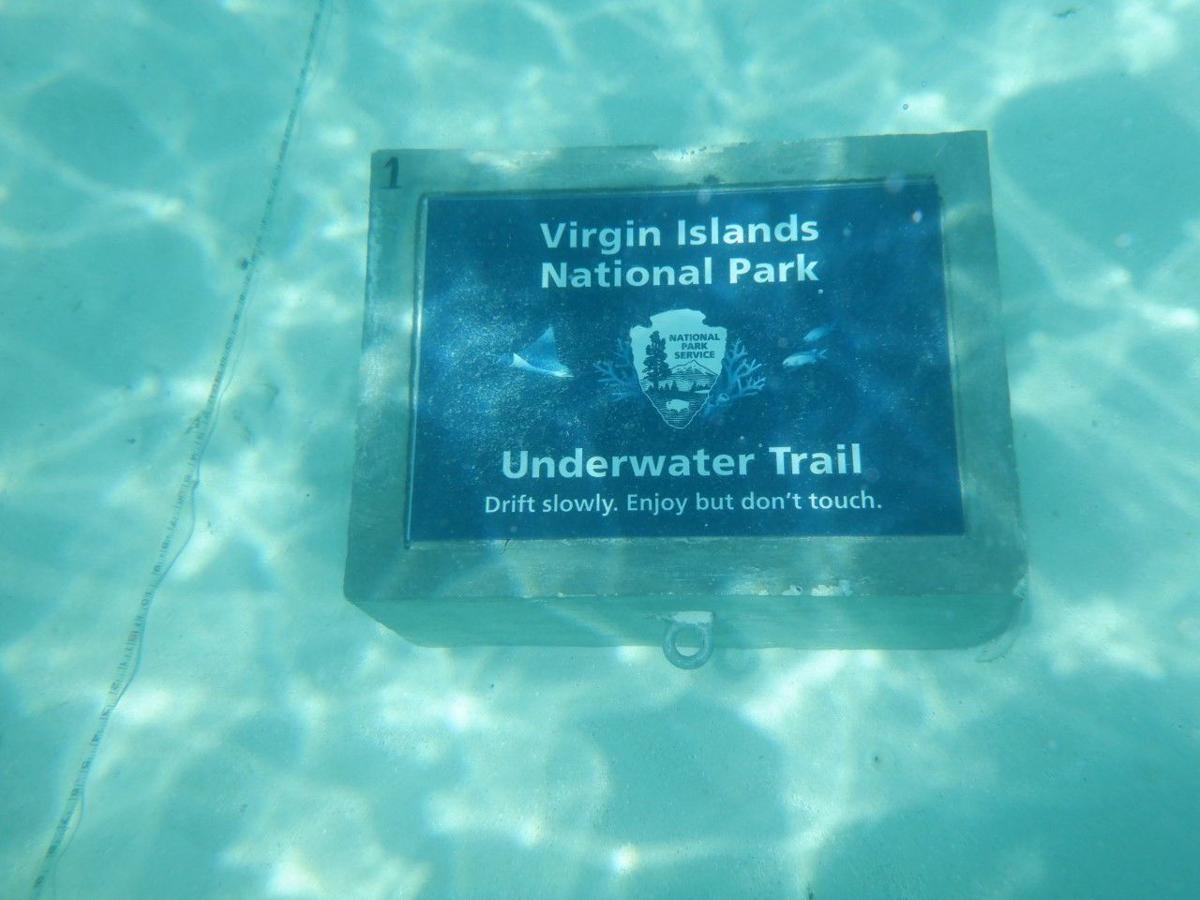 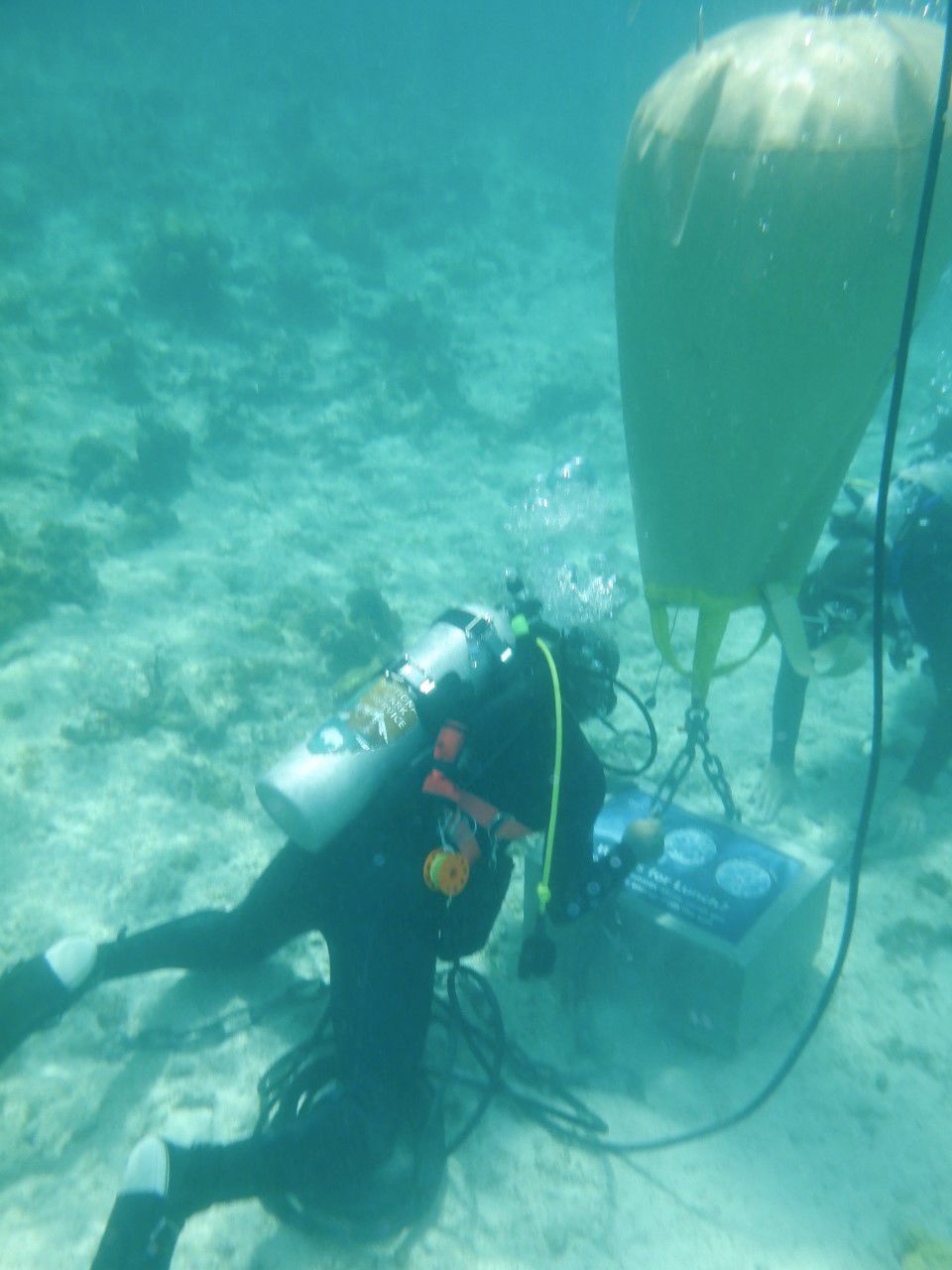 The underwater snorkeling trail at Trunk Bay has served as a popular tourist destination for decades. Now, it has a fresh look courtesy of 17 new signs with updated messaging that replaced the old underwater signs.

While the old signs simply detailed fish and coral species that one might see on the trail, the new signs include the added message that coral reefs are in trouble. The underwater signs will be complemented with a sign at the base of Trunk Cay informing snorkelers that setting foot on the cay is forbidden. Not only does climbing on the cay require swimmers to stand on the coral that fringes the cay at the waterline, but the spit of land just off the beach serves as a sea bird nesting colony.

“The new signs are more about what’s happening with the corals, because they’re in decline,” said Laurel Brannick of the Virgin Islands National Park. “The reefs are in trouble today. It’s staggering, and it’s just unfortunate. People have to start paying attention if they want the reefs to survive. Use reef safe sunscreen, don’t stand on the coral, don’t drop anchor on the coral.”

“I feel extremely grateful I’ve had the opportunity to get to know these reefs over the past 25 years, but I’m very saddened to watch the friends that I’ve gotten to know over those years die, and know there is very little I can do about it,” said Miller.

In addition to direct threats by humans including anchoring or stepping on reefs, or the use of sunscreens with toxic chemicals like oxybenzone, which increases coral’s susceptibility to bleaching, the territory’s reefs have faced disease over the last two decades. Nearly every year since 2000, Virgin Islands reefs have experienced coral bleaching due to increased ocean temperatures, said Miller. In 2005, a disease called white plague swept through the territory’s reefs, and today, scientists are battling stony coral tissue loss disease.

“Stony coral tissue loss disease affects 20 or more species of major reef-building corals,” said Miller. “They are the architects of the reefs, so this is essentially a fire burning down all your old trees. This is one of the most devastating disease outbreaks we’ve seen on par with what we saw in 2005 and 2007, where our work in the National Park documented more than 50 percent loss in coral cover in the sites that we monitored. That mortality is a staggering amount, and the current outbreak is just the latest in the assault of coral reef communities.”

Though the threat of coral disease is comparable to the recent wildfire threat faced by the giant California sequoia trees that made headlines, coral reefs don’t make the news as frequently, likely because they’re underwater and not as easily visible, and because humans don’t feel the side effects of coral disease like they experience the smoke and other effects of wildfires, Miller suggested.

The corals currently under attack by stony coral tissue loss disease have survived the last two decades of bleaching and disease, and the devastating hurricanes of 2017.

“You have this incredibly durable community that survived all these assaults, and now it’s being laid waste by this tremendous disease,” he said.

Scientists and other experts are working to fight the latest disease outbreak, which arrived in the territory in January 2019. The Caribbean Oceanic Restoration & Education Foundation has partnered with Joe Townsend of the Coral Disease Advisory Committee of the Virgin Islands to set up trained strike teams that apply antibiotics to corals affected by stony coral tissue loss disease. Amoxicillin has proven to be between 67 percent and 90 percent effective in fighting the disease, according to a 2020 study published by Nova Southeastern University.

There have also been recent efforts to mitigate the damage caused to coral reefs by the 2017 hurricanes. The National Park Service announced last week an award totaling $3.28 million to address the impacts of hurricanes Irma and Maria on coral reefs, mangroves, and shorelines at the VINP, the Virgin Islands Coral Reef National Monument, Buck Island Reef National Monument, and Salt River National Historical Park and Ecological Preserve. CORE is one of the organizations that will receive funding through this award.

While chronic stressors like toxic sunscreen chemicals, runoff and sedimentation from the land, and overfishing are more straightforward, the acute stress of coral disease presents a lot of unknowns, said Miller, who urged people to reduce their impact on coral reefs.

“While people are out there enjoying the reef before so much of it dies, they have to behave responsibly, which means don’t stand on the reef, don’t kick the reef, use boat moorings rather than an anchor, use protective clothing or mineral sunscreens,” said the fisheries biologist. “These are all the things we know how to do to protect the reef.”

The new signage at Trunk Bay encourages people to become the stewards of the coral reef systems that grow only about the width of a dime per year, and serve as the “front door” to island shorelines, said Miller.

“Once corals die, they’re subject to being eroded and broken down,” he said. “What we saw with the hurricanes was the reefs that had died in 2005 and 2007 were extremely vulnerable to being toppled down and broken, where the live reefs withstood the energy of the storms. Having dead reefs are like leaving the front door wide open during the storm, and we all know that’s not good.”

Corals that are hundreds of years old can die due to stress and disease over the span of just a month, Miller added. The corals living today that have survived numerous stressors over the last two decades are more important than ever, said the biologist.

“The big message is that if people want to see and experience coral, they need to go out and do it now,” said Miller. “Don’t wait for a holiday. Go out this weekend on your favorite reef and dive and snorkel and take pictures, because there will be less of it there next weekend. It’s changing that fast. Every living piece of coral that is here now is more important than ever before, because they’re the ones that will create the reefs of the future.”

To learn more about coral disease and how you can help, visit www.vicoraldisease.org.