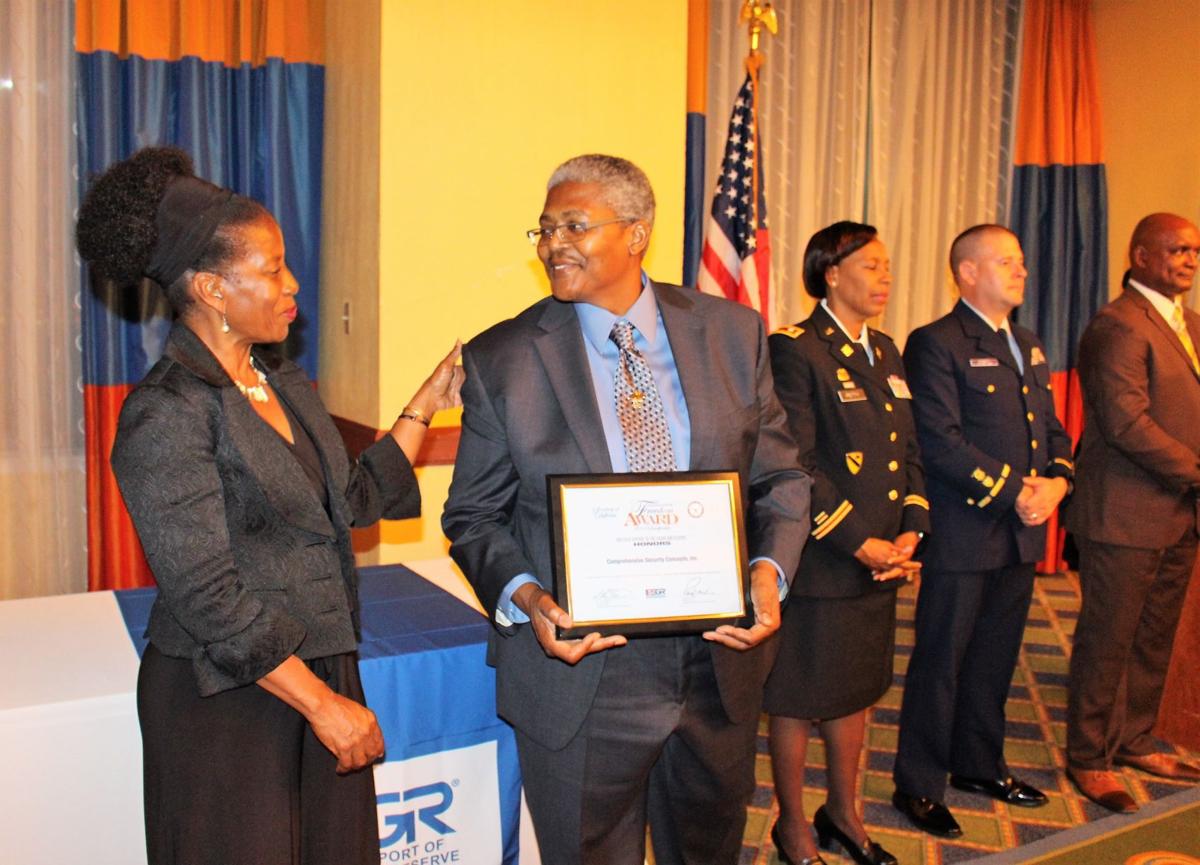 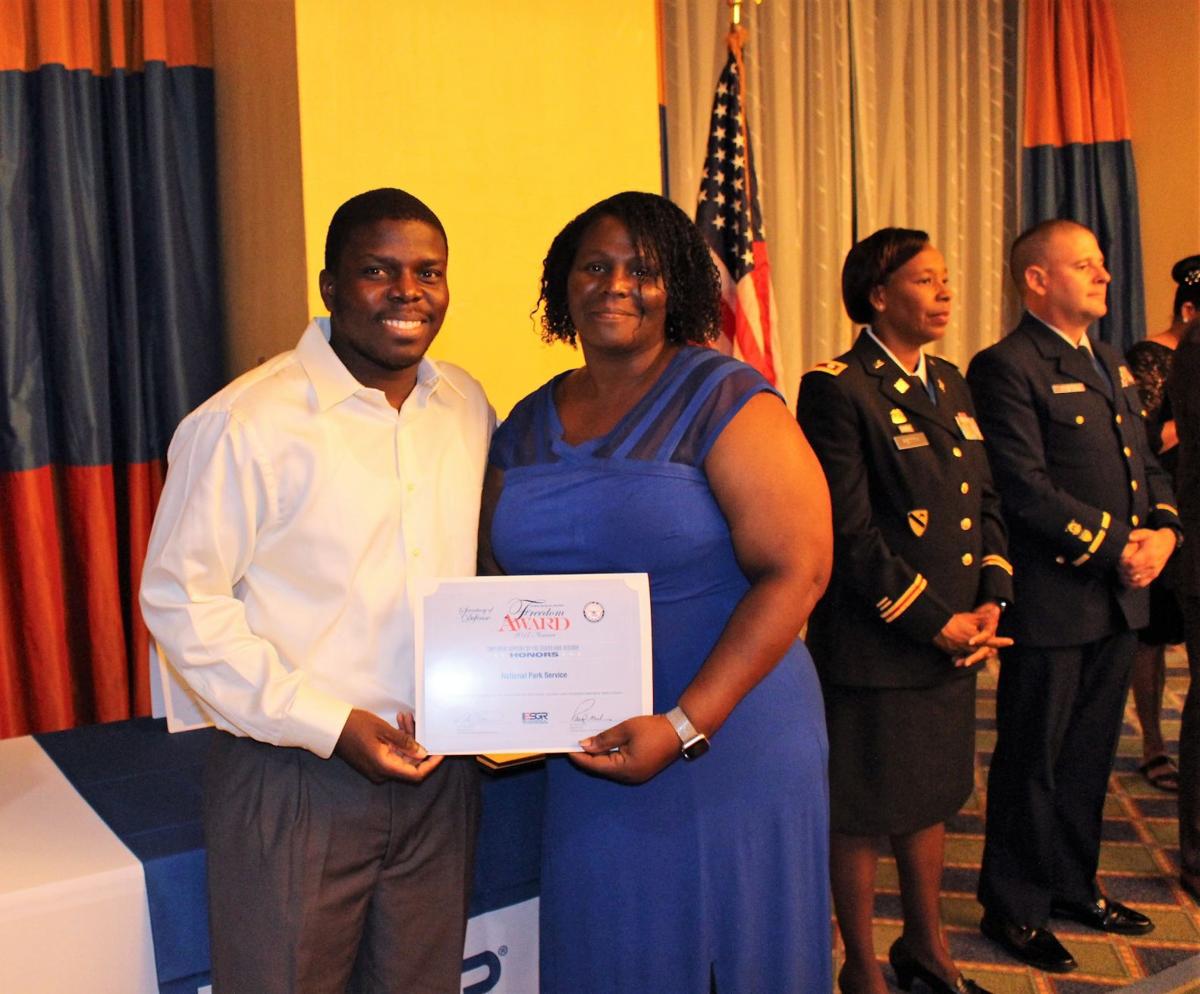 Cosme Harrison, V.I. Army National Guard second lieutenant and former V.I. National Park Service employee, and Janice Williams, chief of administration, accept the Above and Beyond award for the park’s commitment to honoring and serving military men and women. 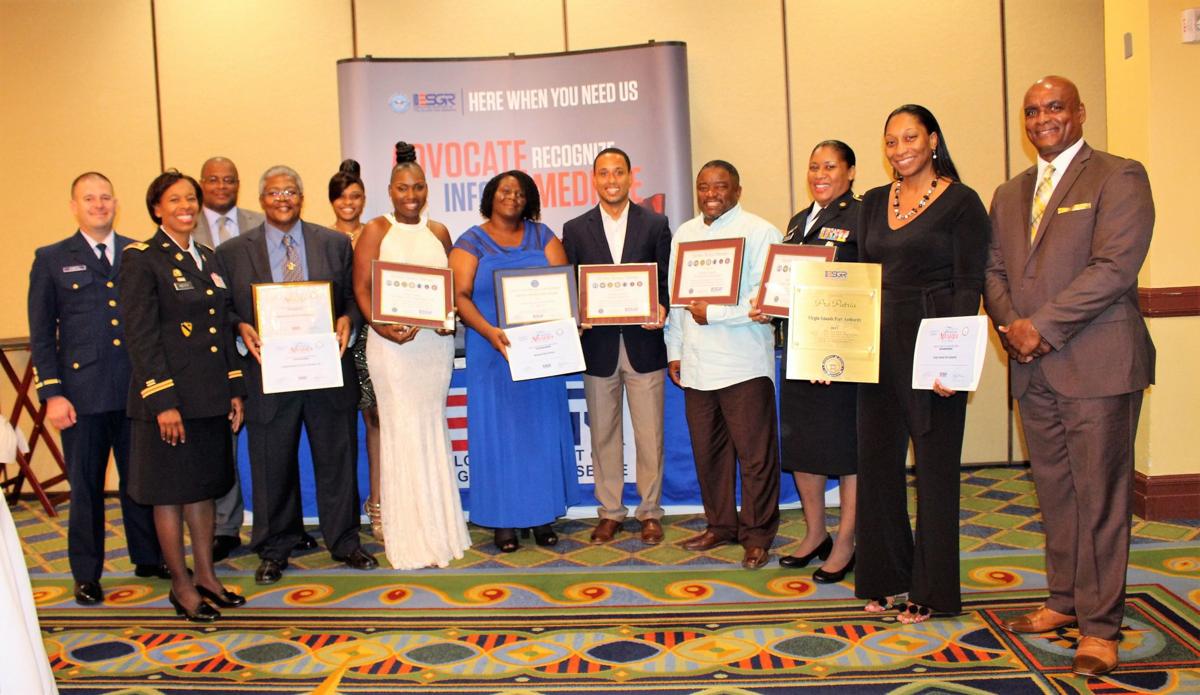 Cosme Harrison, V.I. Army National Guard second lieutenant and former V.I. National Park Service employee, and Janice Williams, chief of administration, accept the Above and Beyond award for the park’s commitment to honoring and serving military men and women.

The Virgin Islands Committee of the Employer Support of the Guard and Reserve recognized supportive military employers during its annual award and recognition dinner.

This year the committee presented 11 awards to individuals and public and private businesses that touched the lives of guardsmen at a dinner at the Marriott’s Frenchman’s Reef Beach Resort on St. Thomas. Awards included the Seven Seals, Above and Beyond, Pro Patria, and certificates for nominees and semifinalists of the Secretary of Defense Employer Support Freedom Award.

The Seven Seals Award, the broadest and most inclusive award given by ESGR on the state and national level, was presented to five businesses and individuals. Four of the awardees significantly impacted the lives of members of the Headquarters and Headquarters Company, 786th Combat Sustainment Support Battalion. The unit was known as the “Band of Brothers” while they were deployed in 2016. Dr. Jerry Smith of Therapy Works V.I., Sheldon Turnbull of DaVybe Radio Station, Taiesa Lashley and Staff Sgt. Simbi Coward all earned accolades from individual guardsmen because of care packages sent, or significant medical or personal support received.

Receiving the Above and Beyond Award was the Virgin Islands National Park Service. This award recognizes employers who have gone above and beyond the legal requirements of the Uniformed Services Employment and Reemployment Rights Act. VINPS is committed to honoring and serving military men and women, and shows that support through its employment practices and employee benefits and recognition. Janice Williams, chief of administration for the VINPS on St. John, thanked the employee who inspired VINPS.

“I would like to draw attention to the employee that recommended us. … He was a hardworking employee. He was very positive and brought great energy to the National Park, and that encouraged us to look out for other military employees,” said Williams.

“Mr. Cosme Harrison is no longer working with us, because he got his dream job, but nonetheless he left a positive impression on the park. Thank you for your positive impression on all of us, and I pray that every guardsman, every military member, makes a difference like you did at the National Park,” said Williams.

The committee’s most distinguished local award, the Pro Patria Award, was presented to the Virgin Islands Port Authority. VIPA demonstrated its commitment to support the National Guard and Reserve when it collaborated with the V.I.-ESGR to permanently hang a large sign at both Virgin Islands airports to honor all veterans and all who serve.

“One of the reasons for this award is because I found out that we had two soldiers, one of them was with me during the time I was in the Guard, he as living in his car. … Our soldiers are having problems finding a job, so I always prefer to always give it to a guardsman, whether retired from the Guard or even to those just coming in,” said Reovan.

“Right now, I have two individuals that just signed up, just finished high school on their way to basic training. They haven’t even started yet, but I gave them something to do,” said Reovan. “That’s what we need to do, give these young men a chance, so that they can succeed, so they can move forward. … But they need our help, so we need to continue to hire these guys so that they can continue to move forward in what they want to do in life.

Recognizing employers is an important element of ESGR’s mission to promote a cooperative culture of employer support for National Guard and Reserve service members. Sen. Dwayne DeGraff, guest speaker and a former guardsman, expressed why the award and recognition dinner was important. “Employers support of Guard and Reserve men is a great honor. To have this organization put this event together to honor the employers and outstanding supervisors … I get goosebumps from it, it’s a powerful thing, having been in those positions,” said DeGraff.

“Most employers take it as just another award. This is a great honor, by a great organization, to support great individuals, outstanding individuals who put their life on the line. It’s about the individuals, our guardsmen and reservists, and the employers who have chosen to support them.”