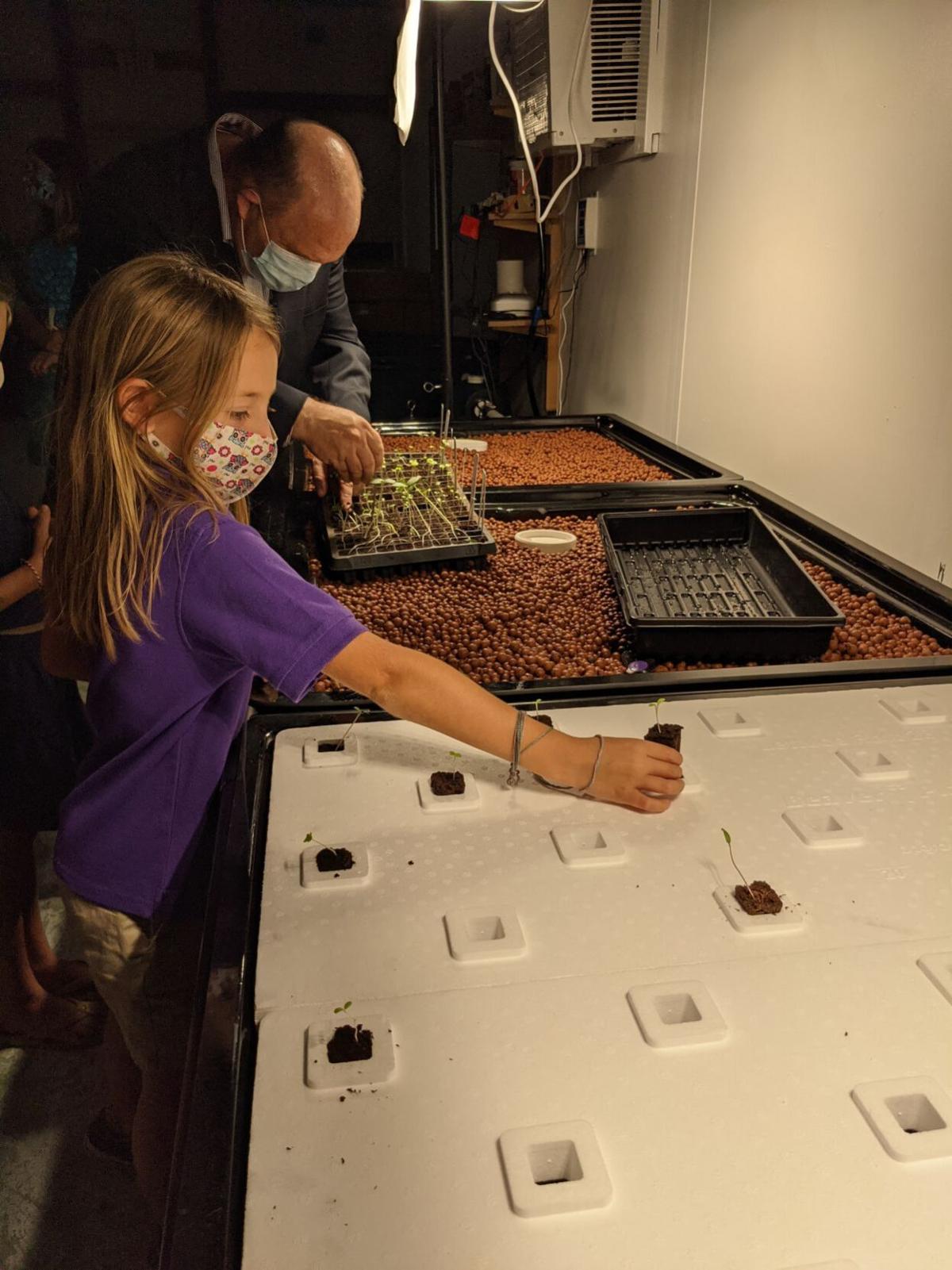 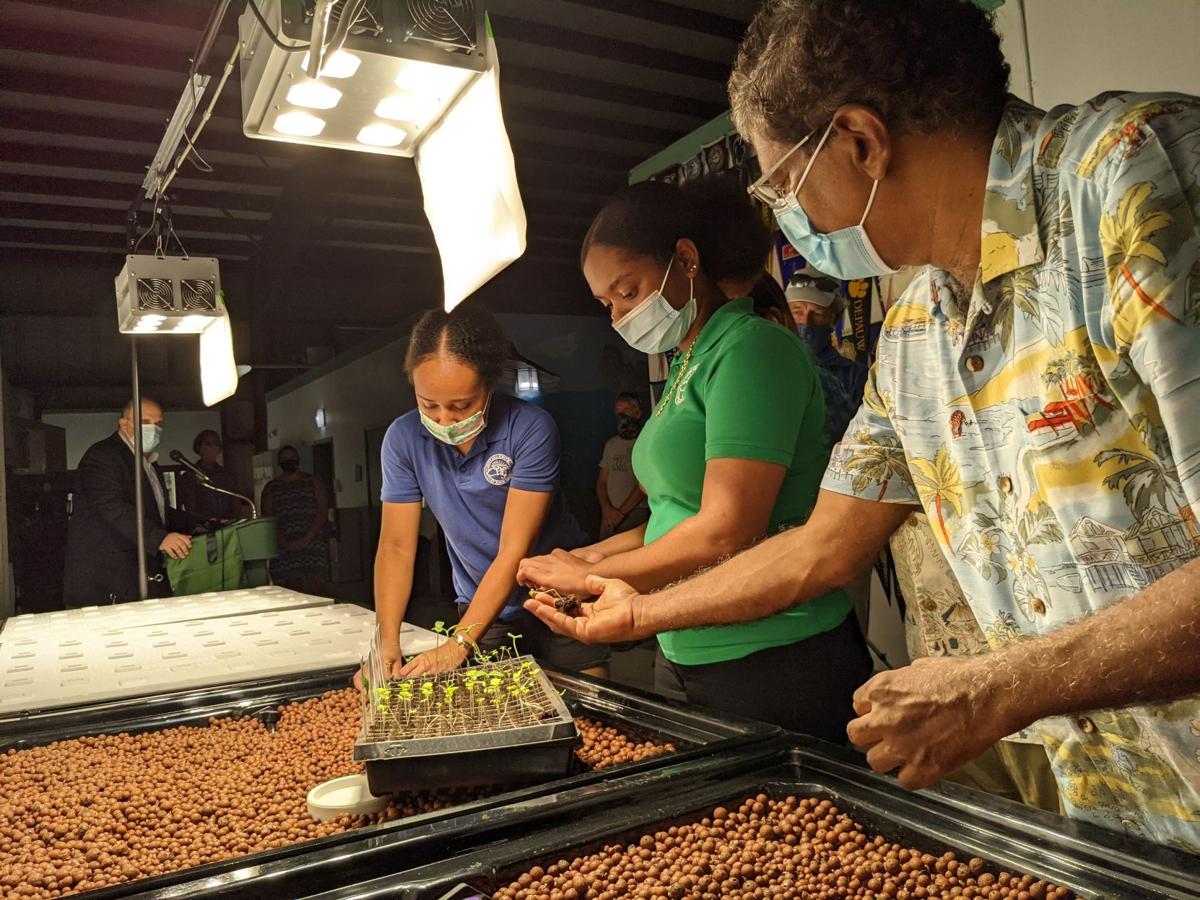 IGLA President Harith Wickrema, who donated the aquaponics system to the St. John school, said he hopes the territory’s students become ambassadors by bringing home their newfound knowledge of agriculture and encouraging their families to grow their own foods.

Aquaponics is an agricultural system that combines hydroponics—growing plants without soil—and aquaculture, or raising fish. The only input the system requires is fish food, as the fish provide nutrients for the growing plants. This allows the plants to grow without soil or additional watering, a positive feature on an island where water is a precious resource.

Gifft Hill’s system was assembled by students with the help of Head of School Ken Mills, who said the aquaponics system fits in perfectly with the school’s mission of experiential learning. Tomatoes, lettuce, kale, and cucumbers will be grown initially, while tilapia are raised simultaneously in the aquaponics system. Tilapia are hardy fish that can tolerate potential issues that could arise as faculty and students learn to operate the system.

The crops and fish harvested from the aquaponics system will be used in the school’s snack program and to supplement what is available to the St. John community. The system will initially be managed by Jennifer Sampsell’s environmental science class.

“We fully expect virtually all of our science classes to engage with it in some way or another,” said Mills. “For example, physics classes could investigate water flow and pipe length and diameters to make the system more efficient. Humanities classes could find opportunities to be involved as well, and I could even imagine an art class documenting the growth of the plants through drawings. It’s meant to be an opportunity for many classes to engage.”

The school’s new aquaponics system will act as a complement to GHS’s Education and Resiliency Through Horticulture partnership with Iowa State University, which maintains gardens at Gifft Hill’s upper and lower campuses. Sampsell said she’s excited to learn about aquaponics alongside her students.

“We’ll learn about the nitrogen cycle which is really important when it comes to aquaponics, and we’ll talk about sustainable agriculture which ties in with learning about ecosystems,” she said. “It’s also something that can be tied in with earth science or chemistry. I’m still learning all the subjects I’ll be able to tie into the aquaponics system, and that’s the exciting part for me.”

Gifft Hill’s aquaponics system is almost entirely powered by solar, as most of the upper campus’s electricity comes from solar panels. It’s set up just off to the side of the upper campus’s main hallway, making the growing fish and plants highly visible to students and visitors. The introduction of the aquaponics system inspired big dreams for future growth at the school.

“Eventually we do have plans to scale up and have a much larger system that could grow produce to go out to the community, or to support our snack and lunch programs here,” said Mills. “When and if we do that, there’s also an opportunity for creating workforce development opportunities for students who are nontraditional learners. Once you get to a commercial scale, you start talking about entrepreneurial skills. That’s a long way down the road; we’re going to walk before we run with this.”

Wickrema also has big ideas of how the aquaponics system donation can help inspire a move toward food security in the territory.

“As part of Island Green’s sustainability mission, we are dedicated to advancing food security through expansion of community, school and home gardening,” he said.

“The ultimate goal is to have the territory’s 15,000-plus students as ‘green ambassadors’ territory-wide, encouraging families to grow at least a few vegetables at home, which could contribute toward our goal of food security.”