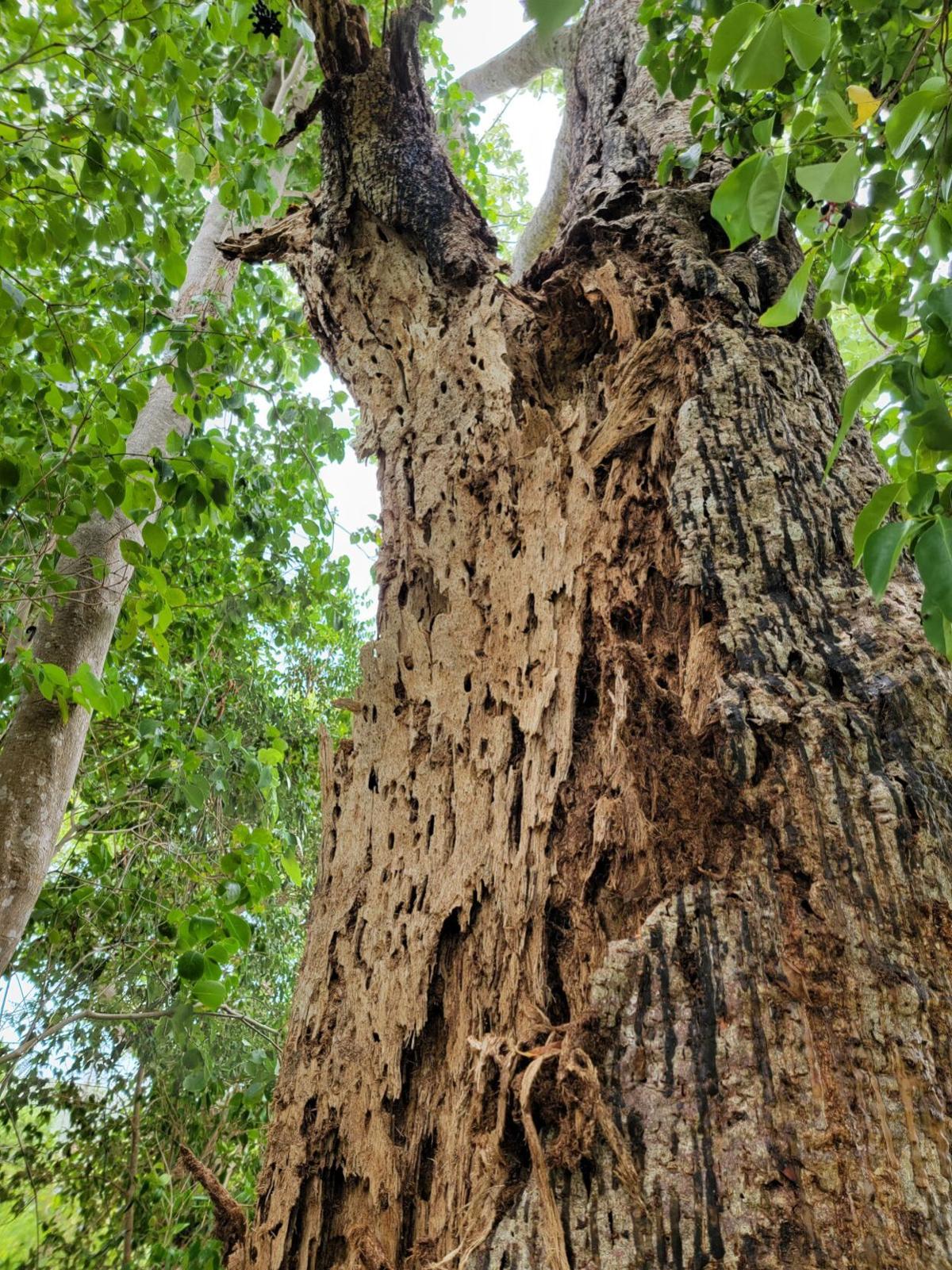 The baobab tree in July 2021, after mango stem borers have wreaked havoc on the tree. Photo by Alex Mueller.

The Estate Sieben baobab tree in January, at left; and in July, at right. 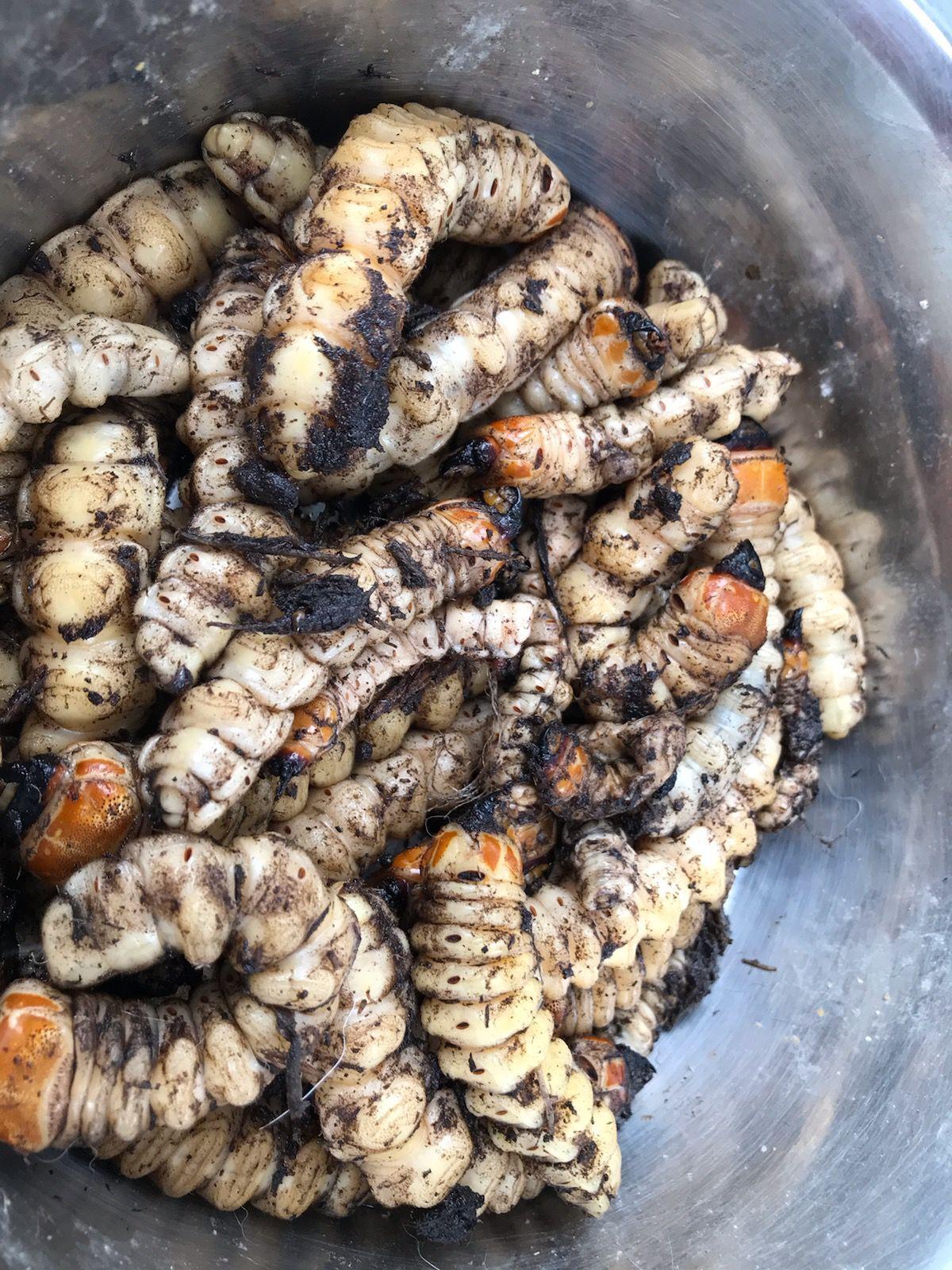 Mango stem borer larvae taken from the baobab tree. This invasive species pierces the bark of mango and other trees to lay its eggs, causing the wood to weaken, eventually leading to the disintegration of branches — or the tree’s trunk. 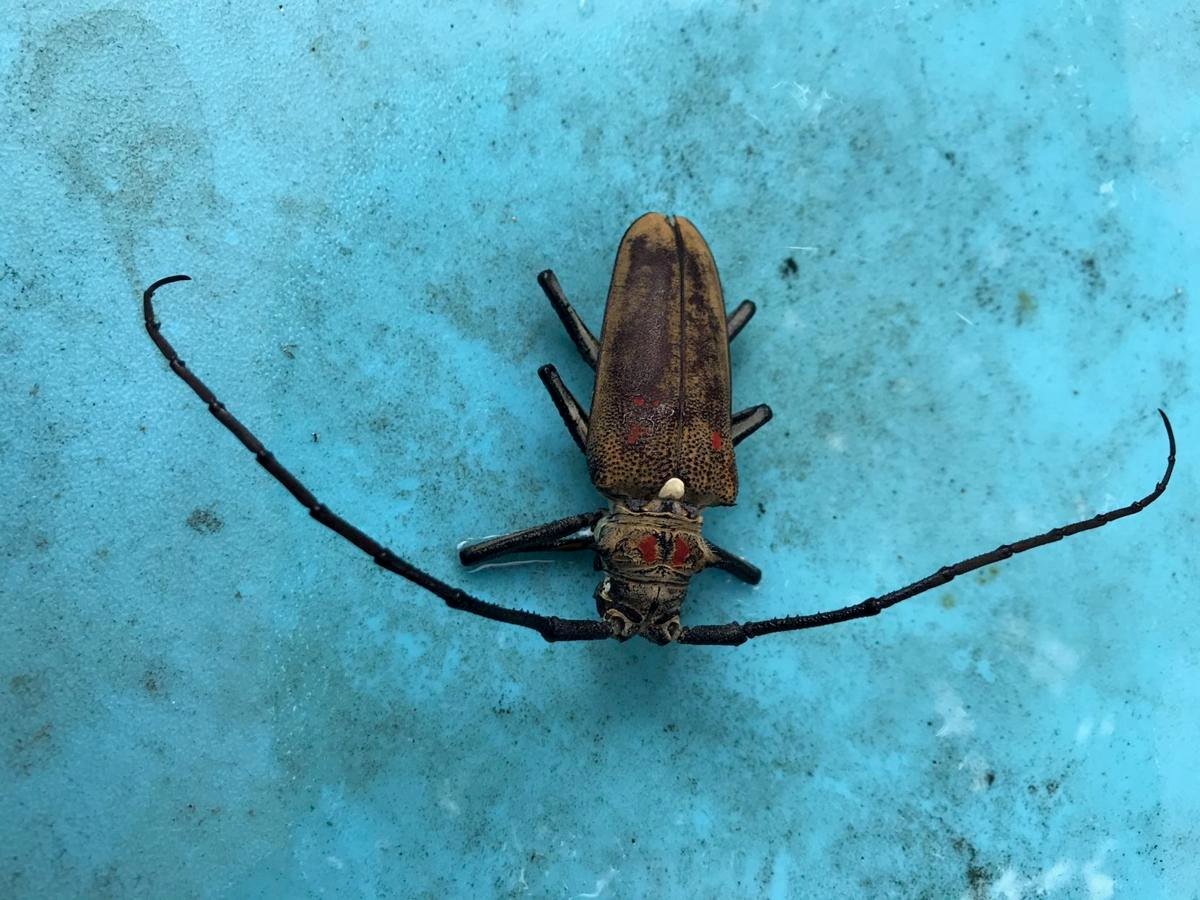 An adult mango stem borer taken from the baobab tree.

The baobab tree in July 2021, after mango stem borers have wreaked havoc on the tree. Photo by Alex Mueller.

The Estate Sieben baobab tree in January, at left; and in July, at right.

Mango stem borer larvae taken from the baobab tree. This invasive species pierces the bark of mango and other trees to lay its eggs, causing the wood to weaken, eventually leading to the disintegration of branches — or the tree’s trunk.

An adult mango stem borer taken from the baobab tree.

The island’s only known mature baobab tree has been an iconic presence on St. John for more than a century. Elroy Sprauve, who was born in 1939 at Estate Sieben, where the baobab is located, recalled that the tree was known to be around 100 years old when he was a child.

Today, it serves as a landmark and a destination for residents and visitors alike who seek it out via a hike on the L’Esperance trail. This notable part of the island landscape is currently under attack by invasive insects; whether it can survive remains to be seen.

The mango stem borer, known as a menace and a serious pest, has taken up residence in the baobab tree. This invasive species cuts the bark of mango and other trees to lay its eggs causing the wood to become weak, which under severe infestations can lead to the break or collapse of branches or the tree’s trunk. Once the eggs hatch, the larvae bore into the tree, creating irregular tunnels and feeding on the tree’s vascular tissues.

“The entire back side of the baobab is dead,” said local horticulturalist Eleanor Gibney, who’s working with the Virgin Islands National Park to help save the baobab. “The larvae of the mango stem borers are everywhere in the damaged part of the tree.”

On a recent hike to the baobab with Friends of VINP Trails Program Director Mark Gestwicki, Gibney said the duo removed 34 three-inch-long grubs from the damaged portion of the tree.

“It looks pretty bad, but it’s still possible the tree will survive,” said Gibney. “We will treat the tree with neem oil which may help discourage the adult beetles and control secondary fungus issues. Going forward, I think we’ll alternate neem with permethrin, a naturally derived pesticide.”

Gibney posits that Hurricane Irma damaged the baobab, opening it up to infestation by the mango stem borer.

“They spend 18 months inside the wood before they emerge as adults,” she said. “If they went in right after Irma, we’ve now got the second generation.”

The baobab tree is native to Madagascar, Australia, and Africa, where it’s known as the tree of life due to its ability to provide food, water, clothing, and shelter to the people and animals who make their home in Africa’s savannah regions. Baobab trunks can hold up to 120,000 liters of water, and its fruit and leaves are edible.

The cork-like bark can be used to make cloth, and mature baobabs are hollow, providing shelter for animals.

Gibney urged residents on St. Croix, which she said has the most baobab trees anywhere outside of Africa, to be vigilant about checking baobabs there.

“The presence of the adult beetles on the trunk of the tree is the earliest warning sign,” she said. “Baobabs may be particularly susceptible to damage since their trunks aren’t really wood, but thin layers of fibrous material.”

The mango stem borer is one in a long line of invasive insects brought to the territory via plants that are shipped in for landscaping. The St. John century plant population is about 5 percent of what it was before the agave weevil came through and decimated the plants that were historically used as a Christmas tree alternative. “The weevil populations have crashed as well because the plants are more isolated from each other, but the agaves are still dying,” said Gibney. “Before, you could easily count 100 blooming agaves; now, you’re lucky if you can find five.”

Another pest that’s taken up a stronghold since Irma is the seagrape borer, a species of moth whose larvae bore into the twigs of seagrapes. This invasive insect was also likely brought in through the importation of plants —seagrapes, in this case — which are brought in for landscaping despite the fact that the hardy, native species grows well from seed.

“On a mature seagrape tree, an infestation is not obvious but if I wasn’t using toxic chemical pest control in the plants I’ve been growing under nursery conditions, I wouldn’t be able to get them past the first six months of their lives, because they get knocked back by the seagrape borer grubs,” said Gibney. “In looking at the natural regeneration after Irma, there are basically zero naturally occurring seagrape seedlings coming in.”

The importation of plants that bring invasive species to the territory is likely to continue, said Gibney, largely because there’s no large-scale local commercial source.

“A lot of propagation of ornamentals is done in Asia under supposedly sterile conditions, then shipped to Florida to be potted up and grown,” she said.

“The ornamental plant industry is a multibillion-dollar business in Florida, and they ship stuff all over the Caribbean. It seems unlikely to change as long as people are making money off the status quo, and there isn’t a strong enough public opinion, or passionate enough support, for native plants in the Virgin Islands.”