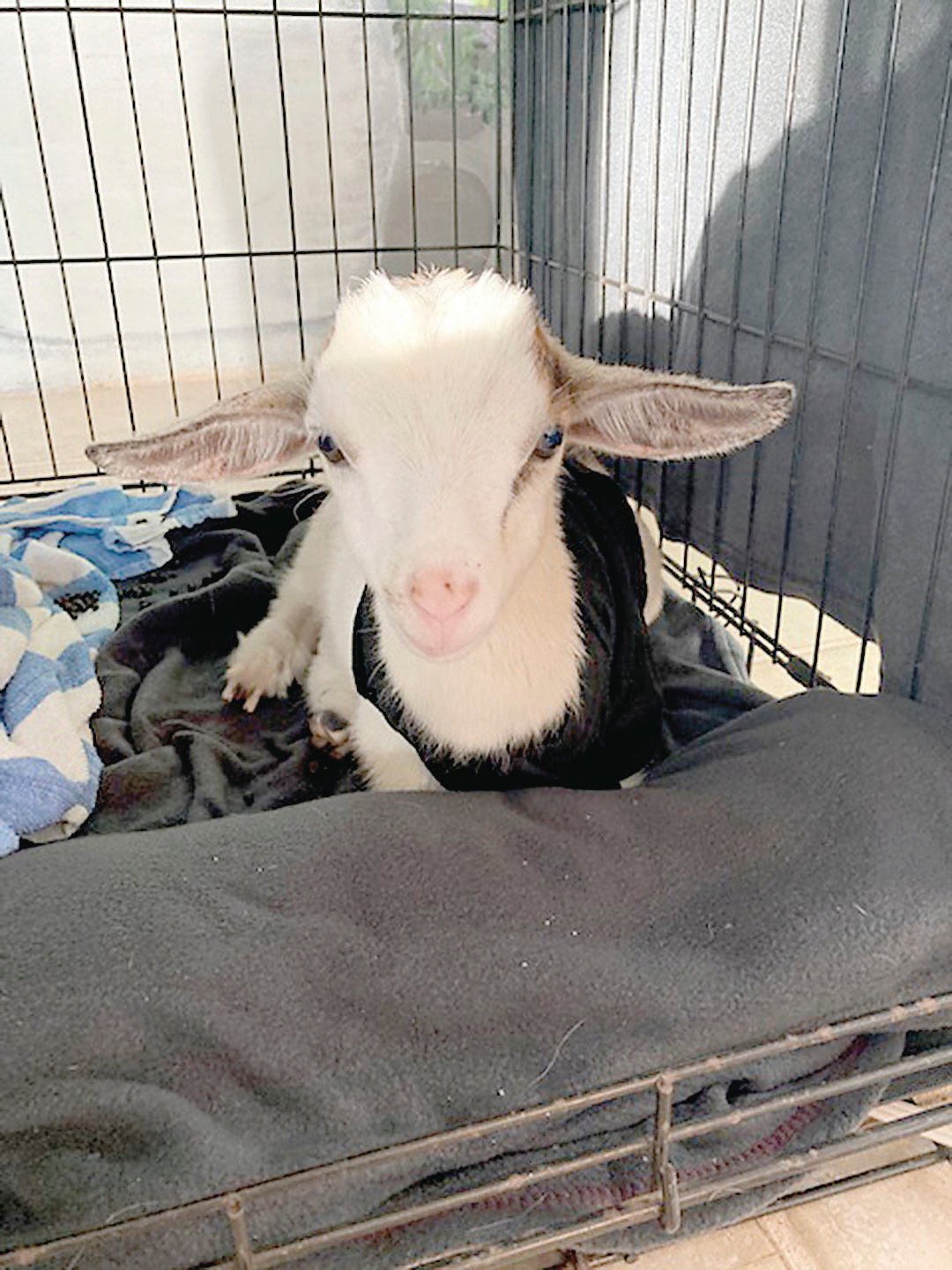 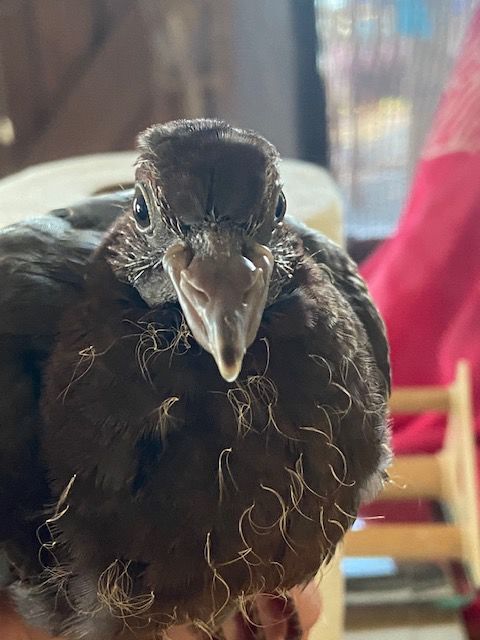 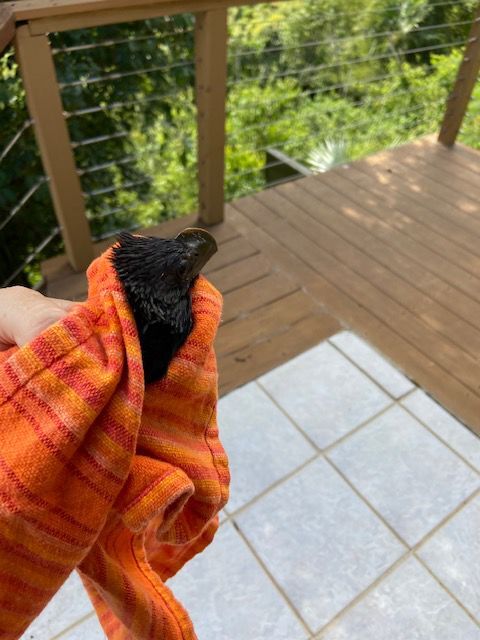 On the left, a scaly-naped pigeon brought in from Lovango; and on the right, a Smooth-billed ani rescued from a boat. Both birds were cared for by St. John Wildlife & Donkey Rescue.

On the left, a scaly-naped pigeon brought in from Lovango; and on the right, a Smooth-billed ani rescued from a boat. Both birds were cared for by St. John Wildlife & Donkey Rescue.

A group of visitors from Texas were enjoying a day at Haulover when the peaceful sounds of the waves lapping the shore were pierced by the cry of a baby goat. The visitors followed the sound to an unoccupied hurricane-damaged home where they discovered a well full of water, and hovering just above the surface was the mouth of the baby goat that had been emitting the cries. The group knew exactly who to turn to for help — St. John Wildlife and Donkey Rescue’s Pam Holmes, who had rehabbed a baby chick the visitors had found a few days earlier.

“They pulled the goat out and brought him to me,” said Holmes. “I wrapped him in fleece blankets and put him on a heating pad, then brought him to the vet the next day. He had a high fever so he was put on a course of antibiotics, and he’s doing great now.”

Though the nonprofit wildlife rescue organization’s main focus is on birds, Holmes and Phyllis Benton, who founded the organization, do their best to help any animals who are in need. Benton has been federally permitted to conduct wildlife bird rehabilitation since 2007, while Holmes’ interest in animals began on one of the darkest days in America’s history.

“I was working on Wall Street on 9/11 and the senior vice president of the ASPCA, who lived above me, asked me to assist with pulling animals out of Ground Zero,” said Holmes. “I did that for three days straight, and it was just the most rewarding work I’d ever done.”

From there, Holmes moved to Massachusetts and then Rhode Island, where she became permitted through the state to work with rabies vector species. Holmes purchased a house on St. John in 2014, which happened to be just two doors down from Benton. Holmes’ expertise in mammals and Benton’s vast knowledge of bird rehabilitation blended well, and eventually led to the founding of St. John Wildlife and Donkey Rescue.

“There have been aspects of the organization, such as myself and others who’ve done wildlife rehabilitation in some form prior to the founding of the organization itself, but part of what had us formalize was there was a glaring need for it,” said Benton. “We could see, especially post-storms, that there was really nothing formalized in the way of a safety net for wildlife on St. John. We knew there was a real need for this because we’d been getting calls and taking in animals all along, so how do we make this something that provides value to the island and something that’s going to be sustainable.”

A grant from the St. John Community Foundation allowed the organization to have a trailer built for transporting larger animals for veterinary care, but many of the smaller birds, bats, and other animals are cared for and rehabilitated at the homes of the nonprofit’s founders and other volunteers.

“We’d like to be all things to all people but we can’t because there’s a limited number of us doing this out of our own homes,” said Benton. “We’d love to have a piece of property where we could put something longer-term so that when we are older and no longer there, there’s something outliving us, because the need is definitely there.”

Since the beginning of 2021, Benton said the organization has received almost 20 calls for help with animals in need.

Earlier this year, passengers on a luxury yacht noticed a smooth-billed ani in the water. The travelers found St. John Wildlife and Donkey Rescue on Facebook, and brought the bird via tender into Cruz Bay, where a volunteer collected the bird and brought it to Benton, who successfully rehabilitated the smooth-billed ani.

A scaly-naped pigeon that wasn’t walking or flying was brought from Lovango, where it was discovered, to Benton’s home. She took in the bird and nursed him back to health before releasing him from her home.

He returned to visit her twice a day for several days before fully acclimating back into the wild. Not all rescue stories have a happy ending, however.

“We got a call not too long ago about a deer that was on the ground, covered in ticks and not moving,” said Holmes. “We did respond but it was so far gone that we ended up having it euthanized.”

Benton estimates that about 70 percent to 80 percent of the animals the group takes in are able to be rehabilitated and released, which is the ultimate goal of the organization. About 10 island residents have expressed interest in helping respond to calls of animals in distress, but Benton said they could always use more volunteers.

In addition to responding to animals in need, the non-profit is working on public education projects, including one to address window strikes that kill or severely injure birds.

“We had a kestrel that I went to collect after it went a zillion miles an hour into a window,” said Benton. “As I’m leaving with the bird I mentioned to the homeowner that I often hear from people who have a bird strike right after the windows are cleaned, and they had indeed just washed the windows the day before. Maybe you don’t need to be washing the windows all the time; go a little bit longer between cleanings.”

Another way people can prevent bird window strikes is by using decals that allow birds to realize the reflection of foliage they see in clean windows is not a continuation of the forest where it’s safe for them to continue flying.

Benton and Holmes recommend a company called WindowAlert that the non-profit is partnering with for further outreach.

For those wondering about the inspiration to help animals that live wild in nature, which can be a cruel place, the answer is simple, said Benton.

“On many, many, many of these calls, and on many occasions, it’s a human interaction on some level that brings these animals in,” she said. “Whether it’s a window strike or a lot being cleared and there’s a nest that was up in a tree, these animals are very often put in their situation not because of something related to nature, but because of the human-animal interaction. At the end of the day, I’d say ‘Why not?’ These animals are part of our island culture in general. Some run into trouble.”

In addition to more volunteers, financial donations can help the St. John Wildlife & Donkey Rescue pay for things like food and medication. The organization is eligible to benefit from purchases made via Amazon Smile, and donations can be made at www.stjohnwildliferehab.org.

To report an animal in need of assistance, contact Benton at 340-514-8435 or Holmes at 978-509-2203. Follow St. John Wildlife and Donkey Rescue Incorporated on Facebook for photos and stories from their rescue operations.