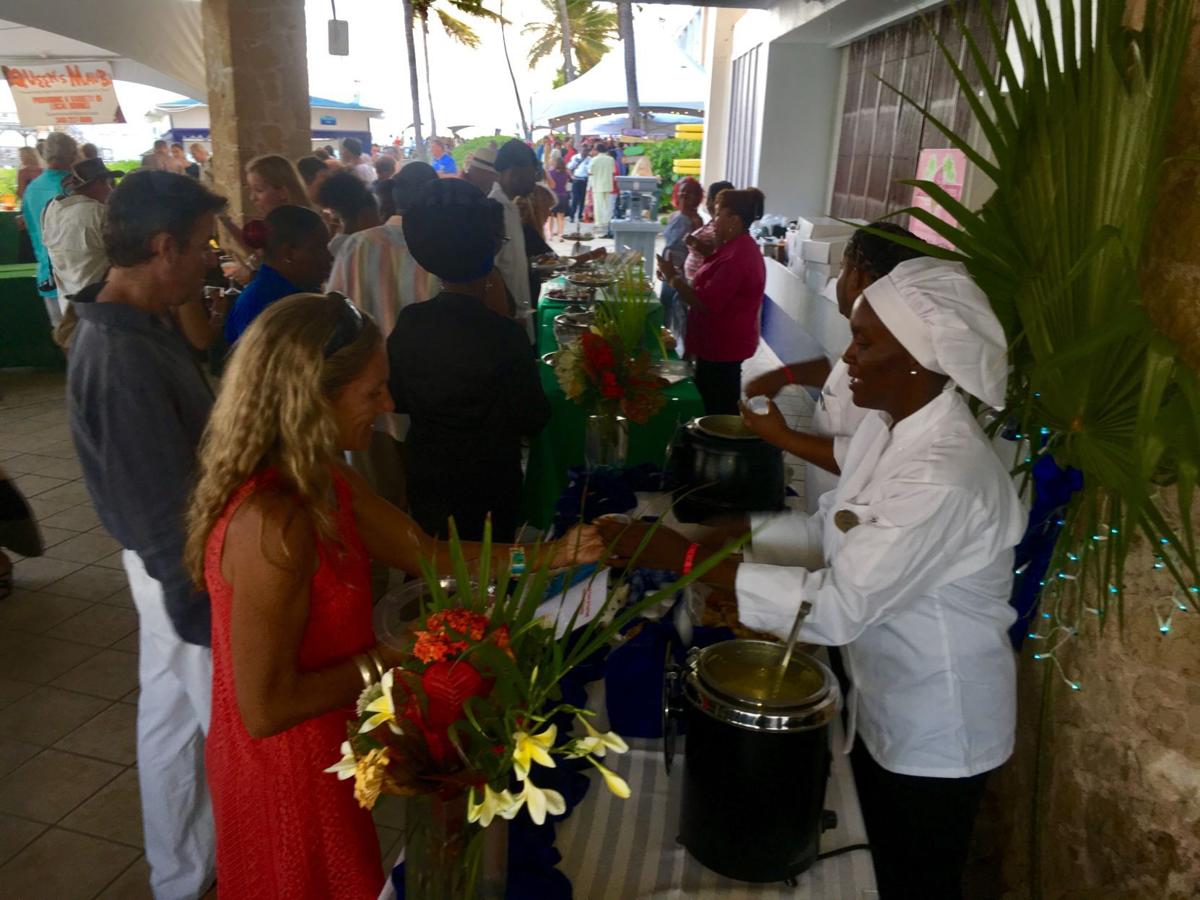 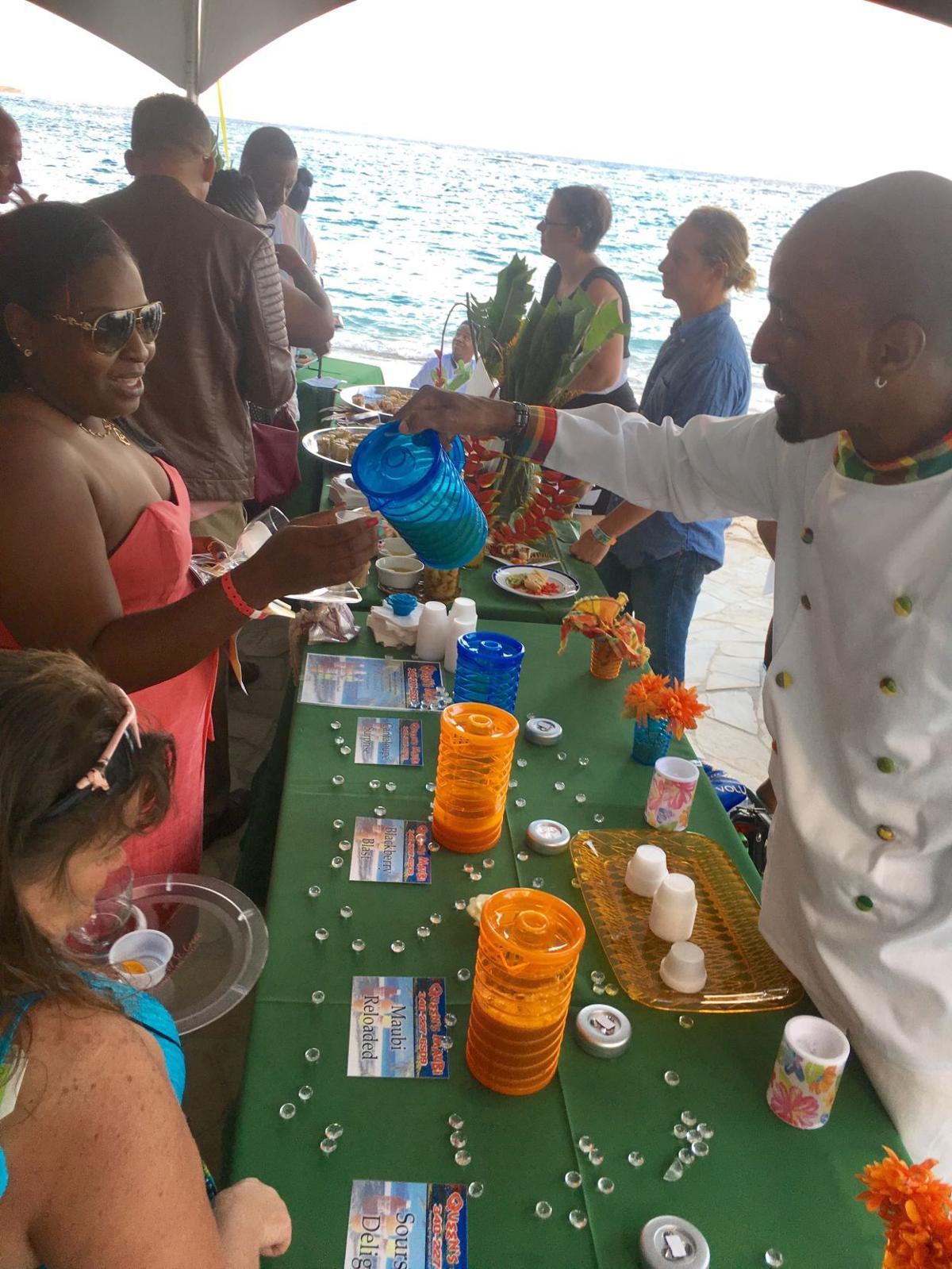 ST. CROIX — The smell of an array of dishes, the ocean breeze at the beachfront property of Divi Carina Bay Resort and Casino, and the sounds of laughter, clinking glasses and calypso music created a special night at the 17th-annual Taste of St. Croix on Thursday.

More than 60 restaurants and caterers were lined up along the entire length of the resort, wrapping around the pool and deck with their signature dishes or new creations ready to be sampled.

A crowd formed lines outside the resort’s four entrances to the event more than an hour before the 6 p.m. start time. As the gates opened the chefs and servers began to share sample portions of various tasty dishes.

Before the event began, attorney Tanisha Bailey Roka, known for her local food blog Crucian Contessa, said she was excited about the event and the fact that this year it is being put on just days after the commemoration of the 100th anniversary of the transfer of the islands from Danish to American rule.

“St. Croix used to be the breadbasket of not only the territory but the entire region and this is a way for us to return to that,” she said. “We used to be known for food production and over the years we have lost touch with that. Even in writing my blog I try to bring back that food magic because certainly it is our destiny to reacquaint ourselves with our past identity.”

Selomie Rivas threw back a small cup of veggie soup to her head, then said it was one of her favorite dishes of the night.

“I’m really picky on the things I eat, so I wasn’t sure I was going enjoy the night, but everything so far was on point,” she said. “The veggie soup was by far the most enjoyable, it was hearty and spicy but I could tell that all the restaurants brought their game tonight and came to win.”

In addition to the soups and sandwiches, meats and fish dishes, there were also lots of sweet treats like apple straddle, cheesecake, benye, bread pudding, brownies, pistachio cakes, and rice pudding.

Louise Richardson said she has been attending the Taste of St. Croix for at least 15 years and has never been disappointed.

“It is not very often that we get dressed up and come out to an event of such high quality,” she said. “It is a time to enjoy great food, support our restaurants and support the people who benefit from the fundraiser.”

Nionique Travis said she was overwhelmed at the number of people who turned out.

“This is my first time coming to it since I moved back home. I heard it is big, but it did not expect such a crowd. I had to work my way through the line, to get to some of my favorites,” she said as she held up her event map.

In addition to the amazing food and desserts, most of the wine distributors and the two rum distilleries on the island provided creative drink combinations for those in attendance. Some restaurants and specialty tables also served up creative concoctions.

Entertainment for the night was provided by DJ Babz, Stanley and the Ten Sleepless Knights on one stage and Cool Sessions Band on another stage.

Judges for the evening had a tough job as they were ushered out of their tent to sample dozens of dishes. The judges included celebrity chefs and local celebrities who selected winners in six categories. Those attending the event also got a chance to select the people’s choice award winner of the evening by popular vote. Chefs Tiffany Derry and Ron Duprat, both Bravo TV Top Chef alums, and Kevin Fonzo, the founder of the Edible Education Experience and Mathayom Vacharat, a private chef to vacationing celebrities all signed on as judges for Taste of St. Croix and will lead both the TasteBuds and School Lunch Make-Over programs in partnership with local chefs and community partners.

Fonzo said having been to the island several times, he always looks forward to the big party that the Tatse of St. Croix brings. He also said the island has great potential for farming and fusing that into the schools and their lunch programs. “All of the schools here have acres of land beside them, they should be filled with fruit trees and gardens to provide for the schools,” he said. “Not only are they great for cooking in the cafeteria, but the fruit trees can be tied in to just about any subject curriculum.”

There are three remaining signature Taste of St. Croix events: School Lunch Make-Over, TasteBuds and Cuisine on the Green. The Taste of St. Croix, organized by restaurateurs Katherine Pugliese and Kelly Odum, started as a small celebration of local restaurants and food. and now has grown into a weeklong event and fundraiser. It has donated more than $350,000 to community programs and local organizations since its inception. To purchase event tickets for the upcoming week or to request information about sponsorship opportunities, visit www.tasteofstcroix.com.