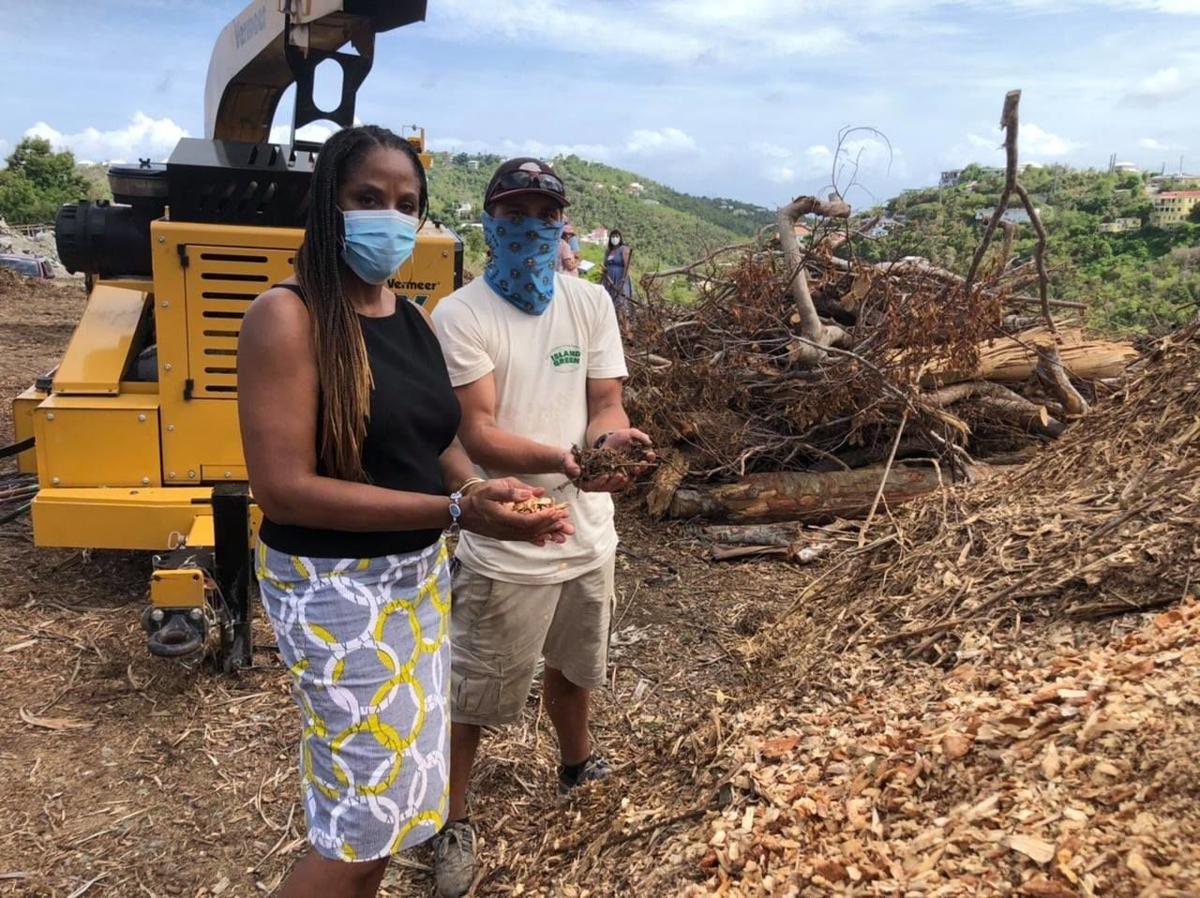 Delegate to Congress Stacey Plaskett checks out the mulch made with Island Green Living Association’s chipper with IGLA employee Anthony Novelli during a visit she made to the ReSource Depot earlier this year. 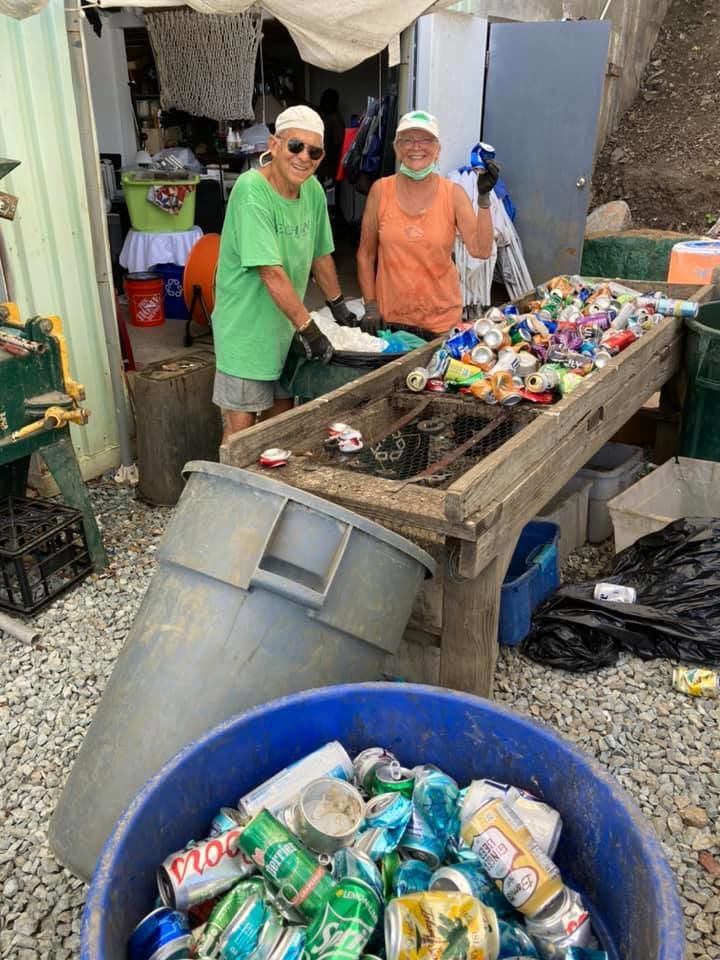 Volunteers Tom and Morag Miller are all smiles as they work to crush cans for recycling at the ReSource Depot.

Delegate to Congress Stacey Plaskett checks out the mulch made with Island Green Living Association’s chipper with IGLA employee Anthony Novelli during a visit she made to the ReSource Depot earlier this year.

Volunteers Tom and Morag Miller are all smiles as they work to crush cans for recycling at the ReSource Depot.

In the seven years since the Island Green Living Association rebranded with a new name and a broader focus, the nonprofit has implemented several initiatives that work to combat the challenges of an ever-increasing waste stream on an island with limited space and resources. IGLA Executive Director Kelly Lawson detailed some of the organization’s efforts during a Friends of Virgin Islands National Park-hosted seminar in honor of Ocean Week.

IGLA’s can crushing initiative has saved more than 800,000 aluminum cans from entering the territory’s landfill. The largely volunteer-based program welcomes residents and visitors alike to spend a few hours with the can crusher. It’s safe and easy to operate, and creates pancake-thin one-foot-by-one-foot squares which are then stacked into bales. Once enough bales are accumulated, they’re shipped to an IGLA recycling partner in Puerto Rico. To date, two shipments of cans have been made, and both shipments were donated by the Norma H, which brought goods into the territory and would have returned empty to Puerto Rico.

Aluminum can be recycled indefinitely, said Lawson. Seventy-five percent of aluminum made in the U.S. is still in existence today.

“The quality doesn’t degrade as you recycle,” said Lawson. “Aluminum cans are often turned around, made into another can, and they can be back on the shelf in 60 days.”

Other sources of aluminum consist of car parts, window frames, and building materials. Aluminum is a non-ferrous metal, and one easy way to tell if a material is made from aluminum, and is therefore recyclable, is by testing it with a magnet. Non-ferrous metals are not magnetic.

In addition to the cans kept out of the landfill by IGLA’s recycling program, the nonprofit’s thrift store, the ReSource Depot, has prevented 500,000 pounds of building materials, furniture, housewares, and other items from entering the landfill. Started in 2012 as a way to salvage building materials, the Depot’s focus has shifted in response to the community’s need. Most recently, when Our Lady of Mount Carmel Catholic Church was unable to receive clothing donations due to the pandemic, the ReSource Depot opted to add clothing to its inventory.

The ReSource Depot is open Wednesday through Saturday from 9 a.m. to 2 p.m., and it’s expected the hours will increase as high season approaches.

IGLA’s most recent addition is the brush chipping program, which turns yard waste into mulch. The mulch is sold at the ReSource Depot at $3 per 5-gallon bucket or $100 for a bucket scoop from the Bobcat. Residents are encouraged to bring their own bags or containers when purchasing mulch.

A compost demonstration project evolved from the chipping program. Using spent beer grain from the Tap Room and other compostable materials, IGLA was able to demonstrate the creation of nutrient-rich compost over the course of six weeks.

“We did this project to show the V.I. Waste Management Authority that this is a system that could be adopted here in the Virgin Islands,” said Lawson.

A University of the Virgin Islands and U.S. Environmental Protection Agency study in 2019 showed that more than 30 percent of the Virgin Islands’ waste stream is compostable. GORE, which creates impermeable covers to protect compost piles from the element, sent a proposal to WMA, Lawson said.

“We’ve been told they’re seriously looking at implementing the program, but it may not be for a while,” said the IGLA executive director. “It looks promising.”

Next up for IGLA is a plastics recycling program, which will help to eliminate much of the gallon jugs, plastic water bottles, shampoo bottles, laundry detergent bottles, and other commonly used plastics from the landfill. A Michigan-based recycling processor initiated contact with IGLA, seeking to source ocean-bound plastics to sell to the automotive and computer industries. This program is expected to launch in early 2022, said Lawson. The Michigan-based company will also buy aluminum from IGLA, and will pay for the aluminum and plastics to be shipped to the states.

“Ocean-bound plastics are generated as waste within 30 miles of a coastline,” explained Lawson. “If it ends up on the ground, it’ll probably end up in the ocean, so it’s important to participate in recycling programs, or to reduce consumption to begin with.”

For more information about IGLA, including the organization’s recommendations for reef safe sunscreen brands, visit www.islandgreenliving.org.