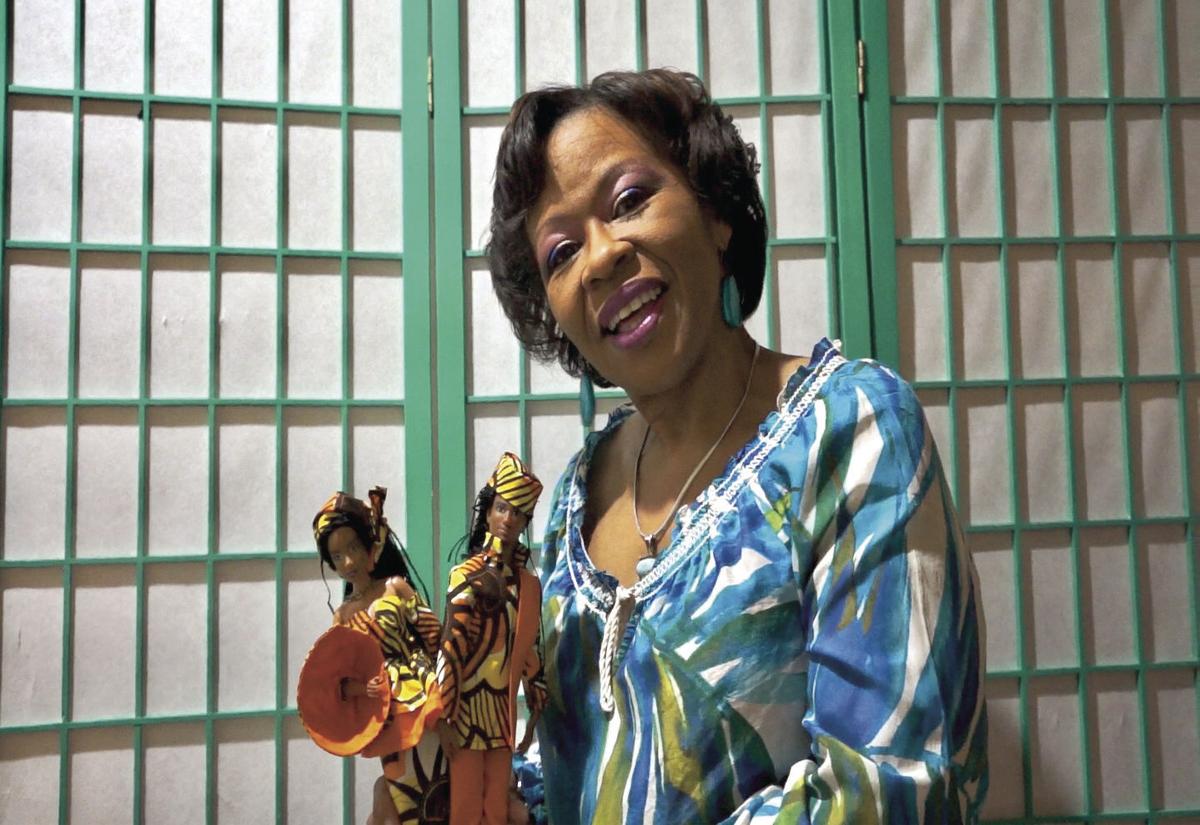 St. Thomas native and current Florida resident Carmen Nibbs is finding a market for her creations: clothing specifically made for black dolls. 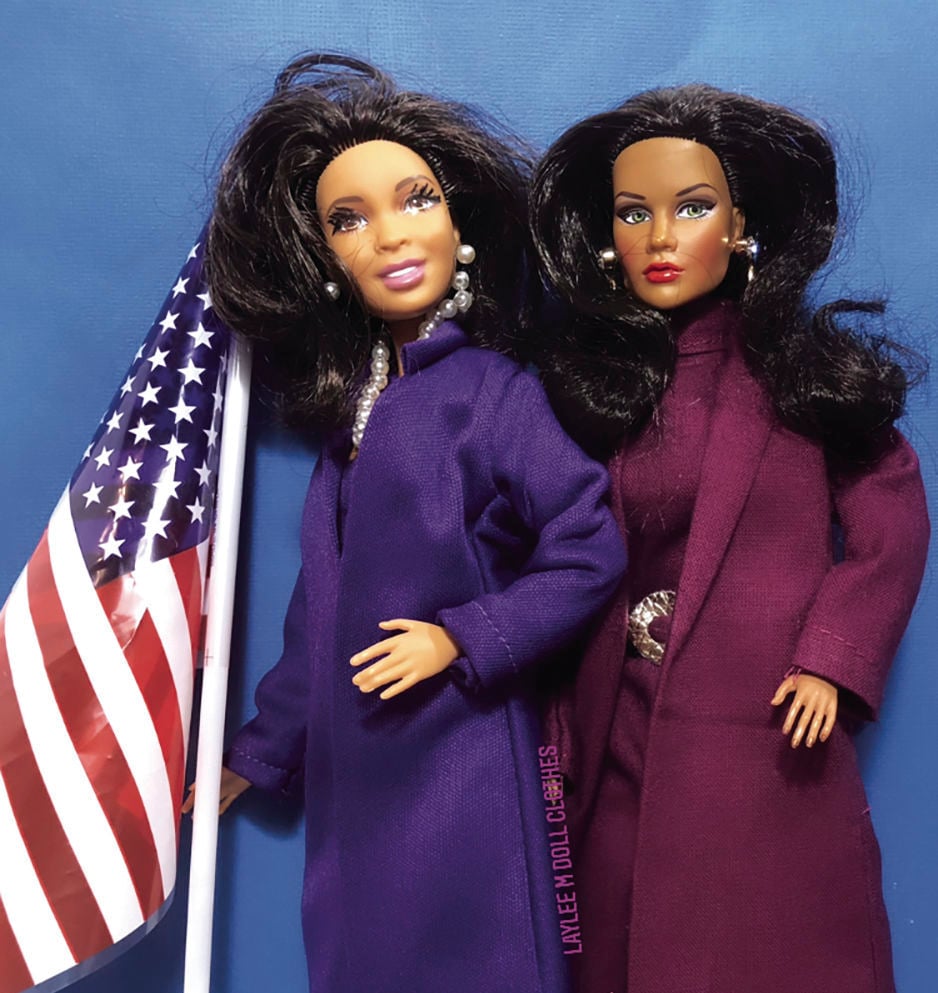 Carmen Nibbs’ e-commerce business is making waves on Esty and Instagram with re-creations of both Vice President Kamala Harris’ and Michelle Obama’s outfits worn at the inauguration. Nibbs hand crafts all of her designs.

St. Thomas native and current Florida resident Carmen Nibbs is finding a market for her creations: clothing specifically made for black dolls.

Carmen Nibbs’ e-commerce business is making waves on Esty and Instagram with re-creations of both Vice President Kamala Harris’ and Michelle Obama’s outfits worn at the inauguration. Nibbs hand crafts all of her designs.

It was a request from her granddaughter that prompted Carmen Nibbs to try her hand at making doll clothes.

Born on St. Thomas, Nibbs spent some of her time growing up on Tortola, where she was the 1980 Miss BVI. On St. Thomas, she graduated from Charlotte Amalie High School. Her mother, Ida Nibbs, still resides on St. Thomas.

After attending Temple University in Pennsylvania, Nibbs worked in advertising and pubic relations at The Virgin Islands Daily News, Bellows International and Emerald Beach Resort before becoming the executive director for Positive Tree, a nonprofit providing opportunities for low-income youth in the territory. She has run the Job Corps program in the Virgin Islands and has worked with Kidscope.

Looking for a fresh start, Nibbs moved to the Orlando, Fla., area, where she landed a job at Advent Health Orlando, working her way up to marketing director for the Neuroscience Institute. After a round of layoffs, she is currently doing freelance work as well as working part time at a store.

When her granddaughter Laylee asked her to make outfits for her doll, Nibbs revisited long forgotten sewing skills that she learned from her grandmother, Mabel Nibbs. From wedding dresses to mermaid outfits, Nibbs started designing and sewing Barbie clothes, and later that year, created an e-commerce business, Laylee M Doll Clothing.

Each piece is handcrafted by Nibbs. Some fashion designs are copied from celebrities, some are specially requested by customers and others are her own unique designs. They have sold to doll enthusiasts across the world, and the business has been featured by Caribbean Elite Magazine, Taji Mag and Sugar Cane Magazine.

“This is quite a learning experience for me, because I meet a lot of people via the Internet. It’s e-commerce, so some people want things, some people have ideas, but some people are trying to scam me,” she said. “Then I have wonderful people, like the woman who had a big black and white party on Instagram, dressing dolls in black and white, and I made all the outfits. She gave me lots of credit and promoted my stuff, and now she’s doing it again with the Michelle Obama outfit. Because I make everything myself. I’m taking my time to sew and I try to be very particular about what I do and who I interact with.”

Nibbs’ main interest is in dressing Black dolls, but they can be hard to find. She often has to visit all of the area Walmarts early in the morning when they are stocking the shelves to find one. In a shipment of dolls, she said, they may include one or two Black dolls.

“What I think from a business standpoint, I’m sure Mattel sells more white dolls annually, so it’s not profitable to invest a whole lot into putting out a lot of Black dolls,” she said. “They do a line of Black figures, but you had better get them quick, especially the Black male dolls. That’s a rare, rare commodity. I live... in a community where more of the Caribbean people and more of the Black people live, and they have shelves and shelves of white dolls, but no Black dolls. A doll is something you should be able to relate to, that you can see yourself in. Part of me is thinking ‘How do you get away with that in a Black community?’”

One size doesn’t fit all in the doll world, so Nibbs has to fashion each outfit according to the specific doll she has to work with.

Besides traditional Barbies, which are not realistically proportioned, Nibbs has found a handful of companies offering their own Black dolls, and like individual women, each has its own unique proportions. Integrity Toys includes Black dolls in its Fashion Royalty collection with a more slender body. The Fresh Dolls brand exclusively offers Black dolls, both male and female, jointed at the knee, elbow, ankle and wrist. Fresh dolls are proportioned to look more like the average Black woman’s body, with larger buttocks, thighs and waist than Barbie, Nibbs said.

“Even Mattel used to do one basic Barbie, but now they do about eight different Barbies. One is the Curvy Doll, with more realistic thicker legs, waist and hips. Then they have a taller, thin doll and petite dolls with a smaller body structure. Now they are coming out with five or six different Black skin tones and different hair textures, and I’m loving the look of the more natural hair. I love a doll that looks Black.”

Nibbs has recreated several celebrity looks, but her most popular so far are her re-creations of outfits worn by Michelle Obama and Vice President Kamala Harris during the inauguration.

And, her latest designs include a collection of 10 dolls for Kristin Frazer of Trefle Designs on Tortola, who designs her own fabrics and has a line of swimwear, resort wear, accessories and home goods.

For more information, visit Laylee M Doll on Etsy or Laylee.m.doll.clothes on Instagram.