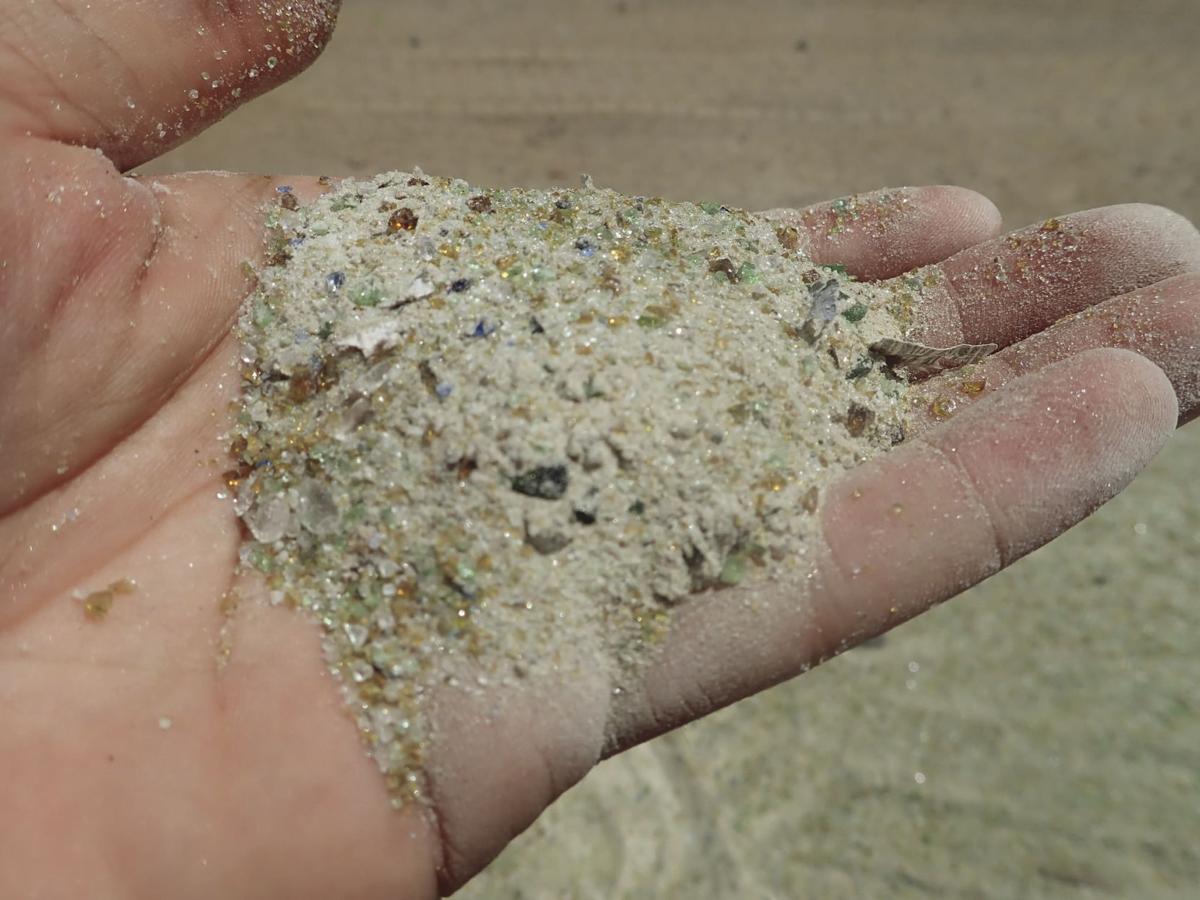 The end product of the GLSand Glass crusher is safe enough to handle without gloves. 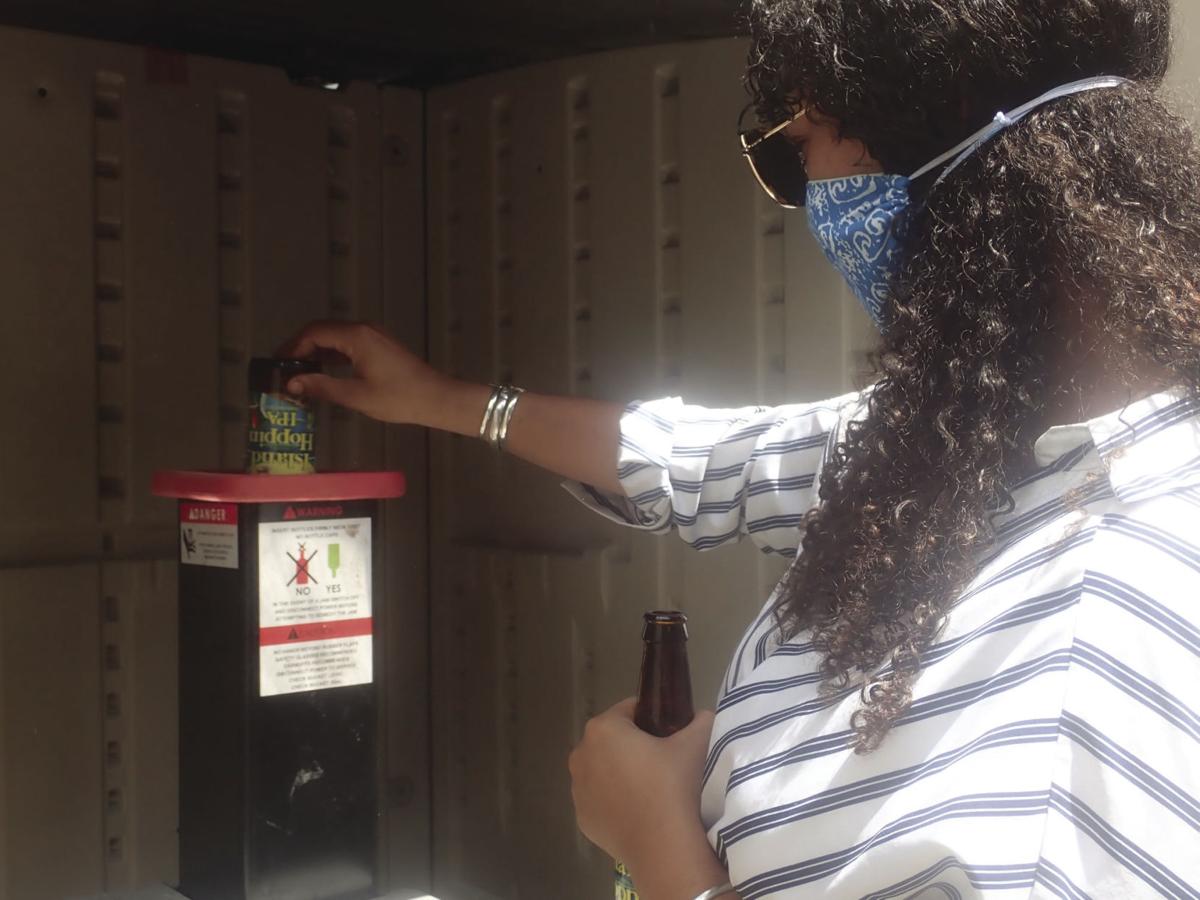 Kai Pyro tries out the glass crusher during a demonstration of the machine owned by a St. John resident.

The end product of the GLSand Glass crusher is safe enough to handle without gloves.

Kai Pyro tries out the glass crusher during a demonstration of the machine owned by a St. John resident.

The University of the Virgin Islands has just received five machines that will aid in recycling glass waste to produce … sand.

It may seem like there is already plenty of sand in the territory. However, when it comes to filling sand bags in the face of an oncoming storm, it is actually illegal to gather sand from beaches, not to mention the harm it can do to speed beach erosion.

Glass is made from sand, and with the new glass crushing machines, Harold Forbes hopes to recycle glass waste produced in the territory and create a product that can be used for sandbags and water filtration, and aggregate for cement.

Forbes, who received his Bachelor of Science degree in biology and Master’s degree in marine and environmental studies from the University of the Virgin Islands, is now the university’s Marine Advisory Service coordinator for St. Thomas and St. John. He helps promote education and awareness about environmental and marine-related issues within the community through events such as Reef Fest and Coast Weeks.

“I’m a scientist by training, but I do a lot of outreach at the university,” he said. “I focus on a number of different topics such as wetlands restoration and youth engagement in STEM and marine science areas, but reducing waste in the territory is something that I’ve been passionate about for the past two or three years.

“When I saw the funding opportunity, I already had the idea in mind based on conversations with other community partners. I’m super excited [the Community Foundation for the Virgin Islands] got interested in the project and decided to fund it.”

The $50,000 project was made possible through the foundation’s Island Spirit Fund, set up by Cruzan Rum to address the ongoing needs of communities affected by the storms. Through donations of $1 for every case of rum sold, the Island Spirit Fund has raised more than $3.5 million for short-term recovery and long-term stability projects, including environmental rebuilding, community planning, workforce development and job creation.

Each glass-crushing machine costs approximately $5,000 and five were purchased and arrived on St. Thomas. The remaining funds from the grant, along with additional support from the Ocean Conservancy, will go towards purchasing two additional units for St. Croix.

A St. John resident who owns one of the machines invited Forbes and his team for a demonstration. Taking some of the crushed glass back to St. Thomas, they ran tests to determine how well can it hold and retain water before purchasing units of their own.

“Ultimately, I know that sandbags aren’t going to stop 200 mph winds, but we would be using sand that was sustainably collected as opposed gathering sand from the beaches,” Forbes said.

“I know glass waste doesn’t account for a majority of our waste stream in our territory. It’s beaten by plastics and organic waste, but I know that glass is a much safer waste product to recycle as compared to plastics, which have to be melted and have issues with the toxic fumes.

“At least with the glass recycling, we would be generating a product that benefits the territory, creating sandbags which could be distributed prior to hurricane season or before a major flooding event, and at the end of the day, it would be reducing the amount of glass waste that ends up in our landfill.”

The machines, made by New Zealand-based Expleco, will be converted to run on 220-volt power and installed over the next few weeks. Expected to be operational no later than mid-February, the machines, which are about four feet tall and a foot wide, must be manually fed fully-intact glass bottles, which they crush within three to five seconds.

The original plan was to give the machines to hotels, restaurants and large businesses that generate large quantities of glass waste, but with the onset of COVID-19, the plan was reassessed. Forbes now believes the project will have a much larger impact if run through a grassroots effort by nonprofit organizations deeply embedded in the community.

Community dropoff points will be established to encourage business and residential recycling, and Forbes is working with V.I. Waste Management Authority to transport the glass waste. He hopes to partner further with other branches of the V.I. government such as the Public Works Department to fully implement the logistics of the plan.

In the meantime, there is more paperwork to be completed than Forbes anticipated.

“I originally envisioned this as, we purchase the machines and we’re good to go, but there have been so many details that I’ve had to work out just to be able to get the machines up and running,” said Forbes.

“It’s a lot more involved than I thought it would have been. There’s a lot of paperwork on the legal side from UVI’s standpoint. We want to make sure it includes that the equipment is being loaned to community partners that will be helping us.

“We’ve already been approached by a multitude of businesses looking to purchase the sand, and so I want to make sure we are allowed to generate profit, establish who gets the profits and where the profits go. So, there’s a lot of logistics to be hammered out before these machines go out anywhere.”