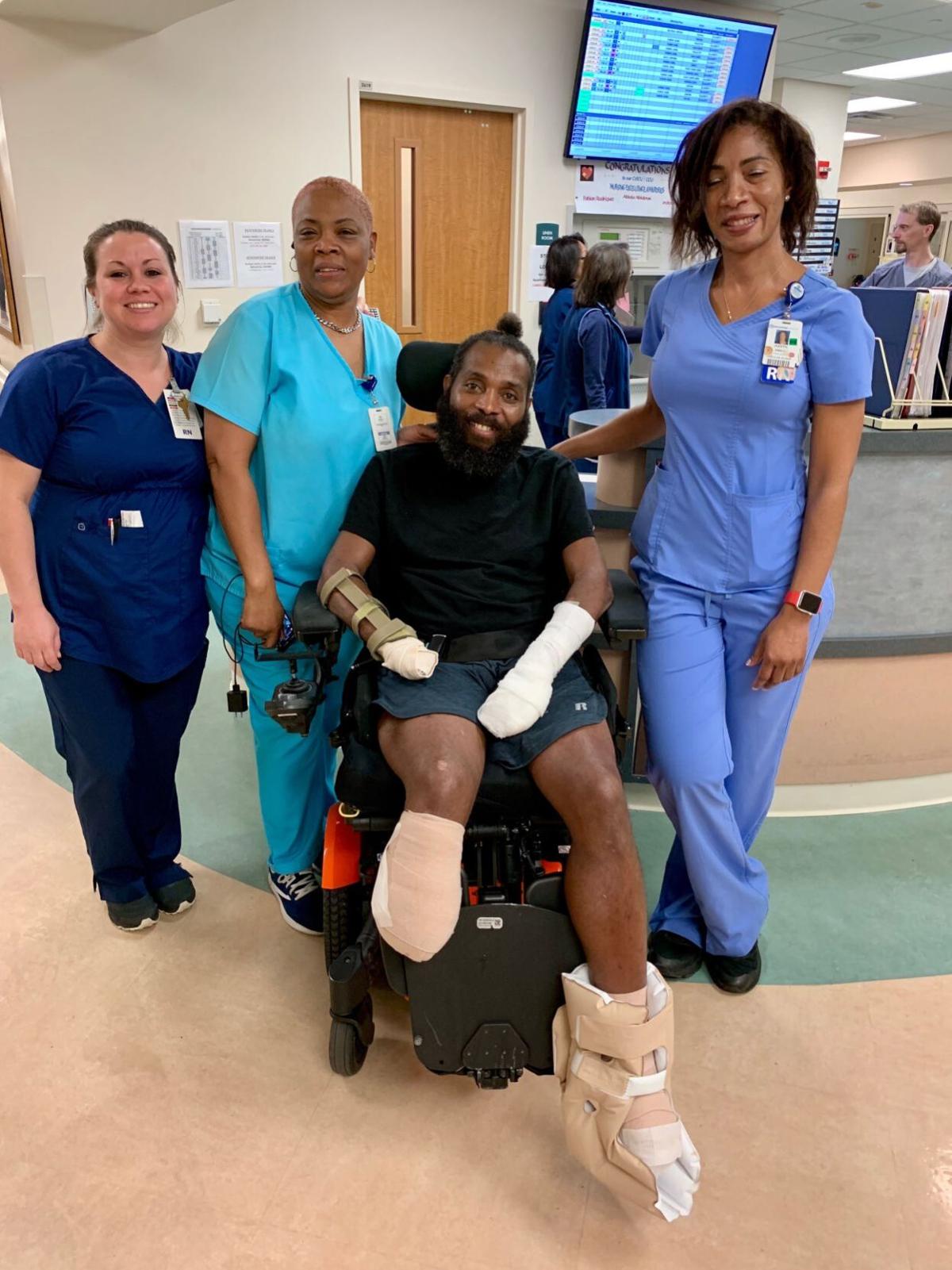 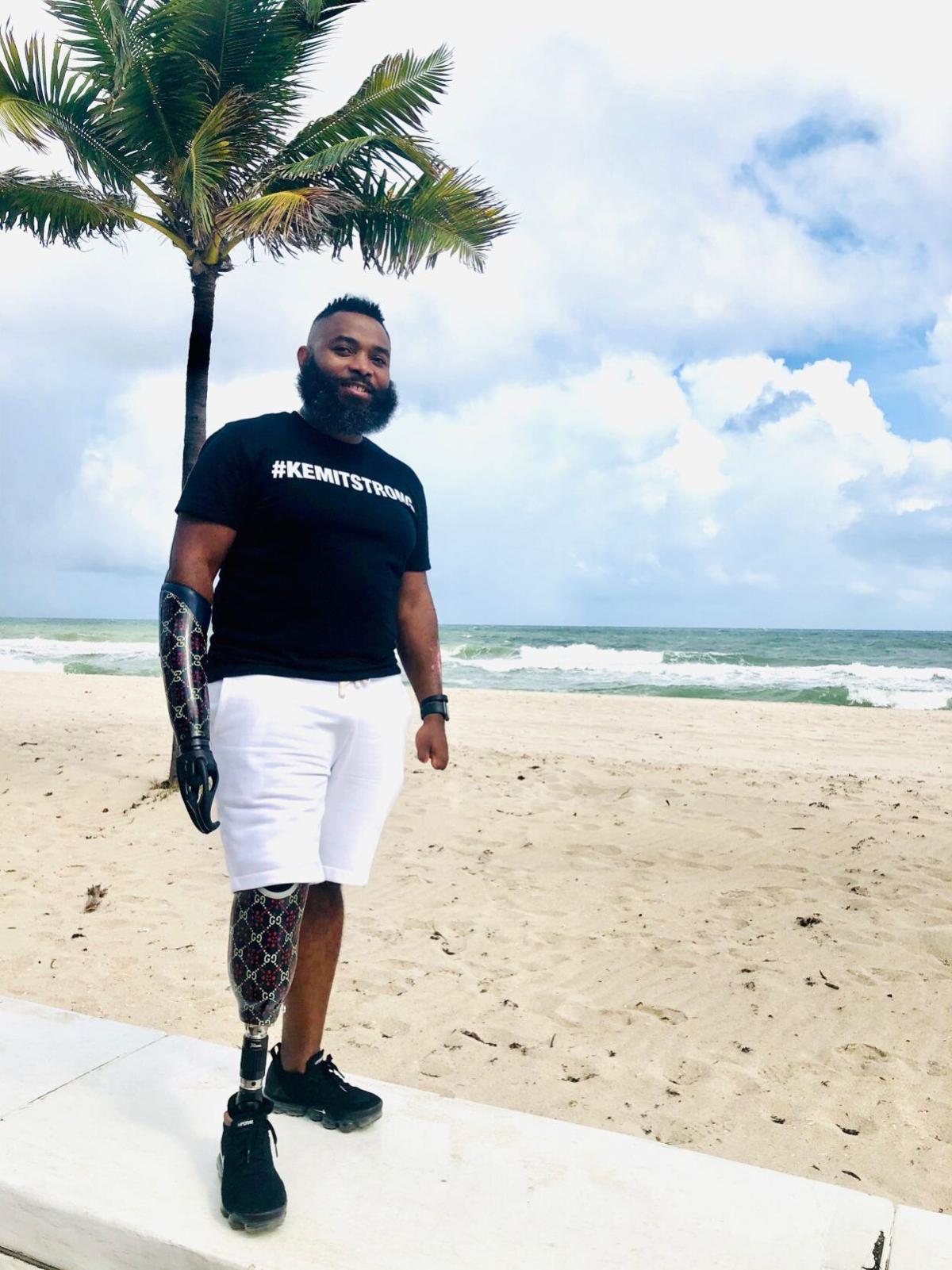 After a serious infection that necessitated amputations on all four limbs and almost cost him his life, Kemit-Amon Lewis is on the mend and going strong.

After a serious infection that necessitated amputations on all four limbs and almost cost him his life, Kemit-Amon Lewis is on the mend and going strong.

It’s been a long and challenging journey for Kemit-Amon Lewis, but after battling a raging bacterial infection that led to multiple organ failures, a two-week induced coma and multiple amputations, Lewis is more determined than ever to live life to the fullest.

Lewis, a marine scientist and dancer, was initially hospitalized at Luis Hospital on St. Croix on July 26, 2019, his mother’s birthday, a week after suffering from groin pain initially attributed to a pulled muscle from dance class or tennis. He was taken to the doctor with a fever and difficulty breathing.

At the emergency room, Lewis was diagnosed with a bacterial infection, complicated by an existing gastrointestinal condition. His vitals continued to decline and within hours, it was determined he would be sent to the mainland.

Lewis was sent to Broward Health International in Florida. The medical center has a relationship with the Virgin Islands as well as many Caribbean countries, Latin America and Mexico to accept cases they can’t manage. By the time he arrived, Lewis was already undergoing multi-organ failure. He was immediately admitted to the ICU unit and was started on aggressive medical treatment for sepsis, which included a ventilator and a dialysis catheter, and he was showing signs of cardiac dysfunction. No one was sure he’d survive, including the medical staff at Broward.

The exact organism that caused the sepsis was never determined, though Lewis believes he came in contact with it while in the water.

“Everybody talks about going from zero to 100, but I literally went from 100 to zero in less than a day,” said Lewis. “The unfortunate situation was that the original point of infection just developed into sepsis over weeks or months because I didn’t know about it. I was in the water so much, so we still don’t know the original site or what the original cause of infection was.”

The staff managed to get the infection under control after a prolonged ICU stay, however the medication they had to give him diverted blood from his extremities to his vital organs, causing gangrene on all four limbs. In the end, the medical team knew one leg had to be amputated at the knee. On the other leg, they were able to save much of the foot, but not the toes. One forearm needed to be amputated and although they were able to save the other hand, they couldn’t save the fingers.

“When I woke up, I was on a lot of drugs, and at first, I had no idea why they were bandaged up,” said Lewis. “But when they finally changed the dressings and I was able to see what was going on, it was definitely an interesting decision. I think that me being a scientist helped in a lot of ways. It allowed me to remove some of the emotion and be objective about the whole situation.”

“We realized that we had lost the battle as far as his extremities,” said Broward Health International Medical Director Dr. Maxine Hamilton. “Many times, we are able to save a person’s life, but they are left with a lot of disabilities, but we still have to do what we do. He was going to be OK from a medical standpoint, but he was 38 and led a very active life, and to be faced with the fact that, in our eyes, he wasn’t going to be able to do that anymore, I have to say to myself ‘We’re celebrating, but what have we done?’ But to the credit of Kemit and his family, they were nothing but grateful. There were very, very few days that I saw him feeling down. His spirit buoyed us and we really tried to save as much as we could.”

With a skilled surgical team, the support of his family and an indomitable spirit, by the end of August, Lewis was transferred out of ICU and could start the long and difficult journey of healing and rehabilitation.

According to Dr. Hamilton, Lewis pushed hard to meet and exceed every goal the therapists gave him. “I’ve stayed in very close contact with him and watched him go through the whole process,” she said. “We’re absolutely thrilled by his progress. We really have to give him credit for his success. As much as we did to help him, his determination that he was going to get back to a normal life was just tremendous.”

Lewis knew it was going to be a challenge and knew he would have to be patient. In order for there to be progress, the limbs had to heal before he could be fitted for the prostheses. Through the painful process, Lewis refused any of the strong painkillers like oxycontin for fear of adding addiction to his list of challenges.

The next step was moving out of the rehab facility. Lewis now lives in Coral Springs, Fla., and walks daily in the neighboring park. He hasn’t used the wheelchair since February and he made the decision to stop going to the Broward Medical rehab center because of COVID-19. He has started cooking for family dinners and is now playing “pickle ball,” a form of tennis on a smaller court using whiffle balls and paddles, “to help with hand eye coordination.” A large portion of his time is spent working with the prosthetics company to get all the tools he needs.

“I’m on my second leg for walking,” he said. “I received a leg that’s supposed to allow me to be more active and run, even though I haven’t gotten there yet. I have an electric hook on the right side, so we don’t quite have the hand yet, but the hook goes straight on my muscles and opens and closes as I need it to. We are heading into the direction I want to go, but it’s a process.”

In the meantime, Lewis is working on an art show with Café Christine on St. Croix. He hopes to have his favorite prints from his trip to Egypt on their walls for next week’s Art Thursday and will hold a silent auction online. He is part of a weekly podcast on WTJX and still serves as the board chairman of the Virgin Islands Coastal Ocean Observance Systems, trying to stay connected with his Virgin Islands home. He is also now looking for job opportunities.

“Florida will be home for a while because I’m still working through the prosthetic company. There are a series of additional tools I still need. We’re working on the partial left hand and partial left foot, so I’ll be here a while to deal with that, but St. Croix will always be my home,” he said.

Dr. Hamilton’s favorite story about Kemit involves a thank you card from him left on her desk. The blank card had nothing but his signature.

“At first I thought ‘that’s nice’ — until it clicked that he was able to sign it with no fingers, using his prosthesis,” she said. “I’ve been a doctor for 38 years. I honestly have to say that to date, Kemit is the first one I’ve seen like this. I’ve seen people that had adversities and they have a good attitude and they have flourished, but he has flourished above and beyond any expectations that we could have had. His is an incredible story of inner strength and spirit.”