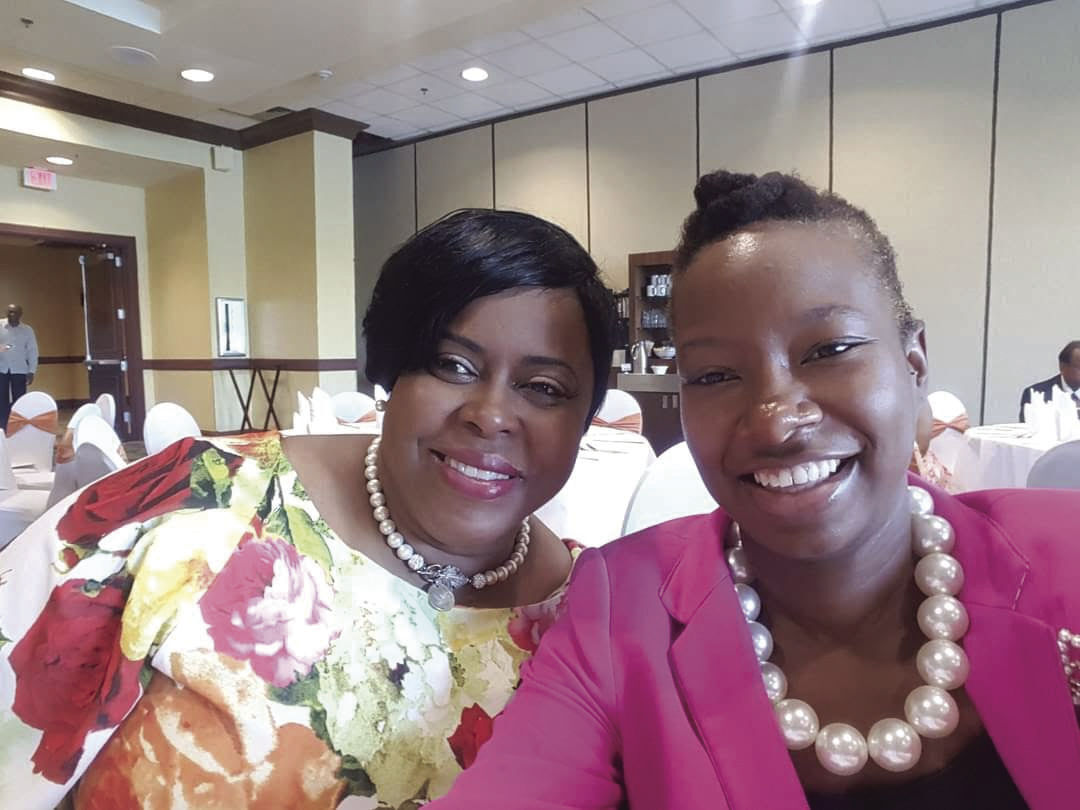 Sorority member Anise Hodge, left, and Julice Holder, president of the Sigma Theta Omega Chapter of the Alpha Kappa Alpha Sorority, Inc., show their support of one of their own — Vice President-elect Kamala Harris — by wearing pearls, considered a symbol of the sorority. 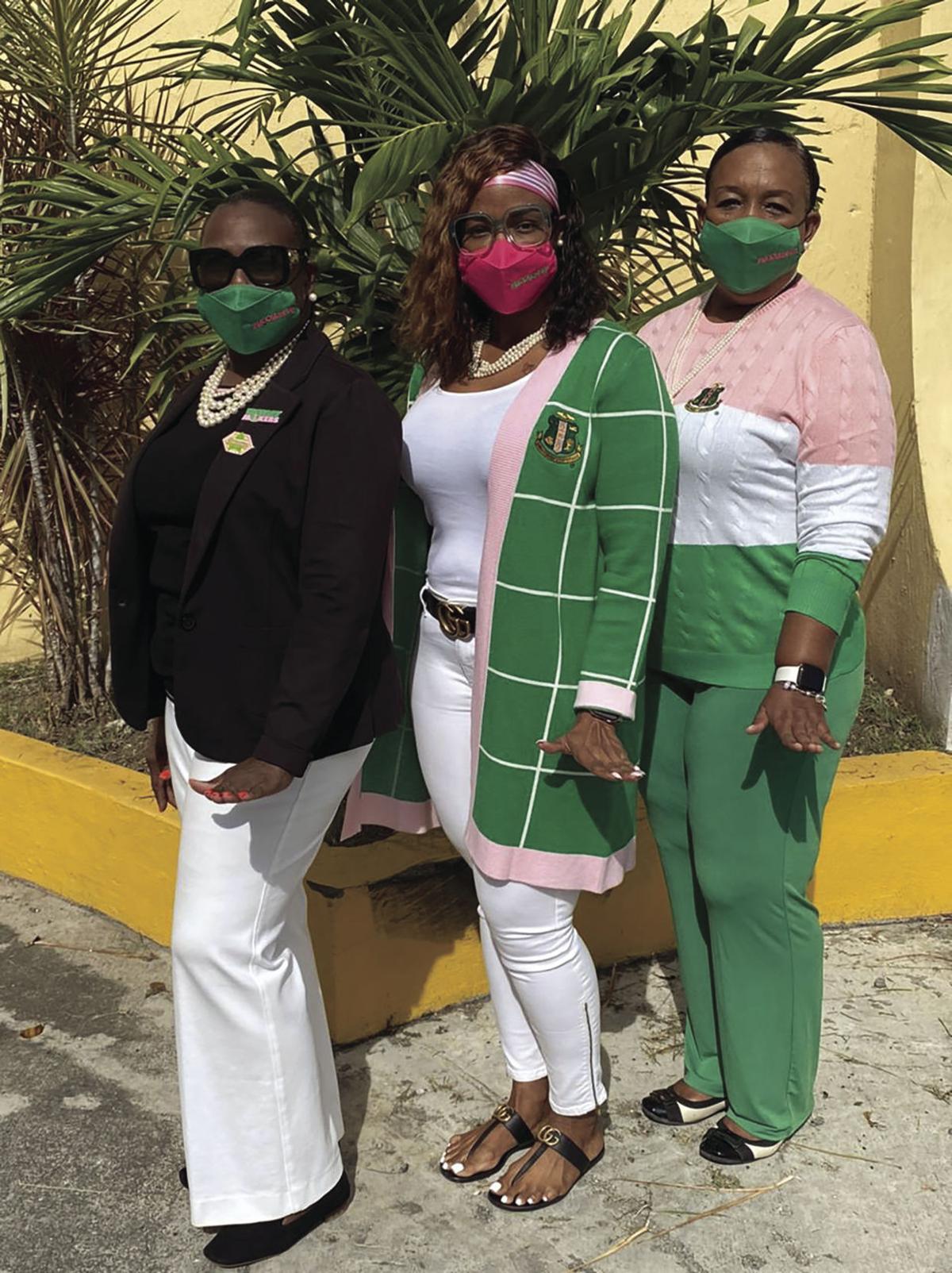 Sorority member Anise Hodge, left, and Julice Holder, president of the Sigma Theta Omega Chapter of the Alpha Kappa Alpha Sorority, Inc., show their support of one of their own — Vice President-elect Kamala Harris — by wearing pearls, considered a symbol of the sorority.

U.S. Virgin Islands members of Alpha Kappa Alpha Sorority, Inc., after celebrating their 113th anniversary last week, are joining women nationwide in wearing pearls today in support one of their own, Vice President-elect Kamala Harris, who is being sworn in as the first woman and first Black and Asian American vice president of the United States.

Members of Alpha Kappa Alpha Sorority chapters in the Virgin Islands will join other women worldwide in donning pearls today, a historic day on several fronts.

Harris, is also a member of Alpha Kappa Alpha — AKA for short — and she’s known to wear pearls. Members of her sorority often wear the symbolic jewelry in recognition of its 20 founders.

Another group, “Wear Pearls on Jan. 20th, 2021” was formed by Hope Aloaye, who wrote online that she woke up on Dec. 5, 2020, and created the group for “empowered women empowering women supporting a woman” and all women, young and old, to “wear their pearls on the Inauguration Day of the first WOMAN VP in the history of these United States.”

She wrote that 10 days later the group garnered 31,000 members. It currently boasts about 375,800 members from 99 countries worldwide.

When Harris accepted the Democratic Party’s vice president nomination in August, she praised the women in her family, including her late mother, who nurtured her, and added this:

“Family is my beloved Alpha Kapp Alpha,” she said of one of the nation’s oldest black sororities, which was founded on Jan. 15, 1908, at Harris’ alma mater, Howard University, and whose members include luminaries like the late Coretta Scott King.

Last week, Harris was the honored guest at the sorority’s virtual National Founders Day program. She shared remarks with more than 41,000 viewers on YouTube and Facebook.

“We all had the blessing of a first-class education in a place that has been historic in its role to produce leaders in this country,” she told her sorority sisters. “We reminded each other that we are not alone, that there are many like us, there are many walking in the room with us.”

“There is nothing about what I’ve achieved that was about me alone. It was all about the support, it was about the encouragement, it was about those moments where you know you might trip, and having a community, having a sisterhood, having a family that might laugh with you when you trip, but then helps you pick back up and pushes you back out…,” she said. “It’s also about what we learned in our sorority, that we must live a life of service … Service is about a duty, and that’s what we were taught and what we know and how we’ve lived out lives. This is what you do as the price, if you will, for occupying a place on this planet.”

Harris, who worked as the attorney general of California prior to becoming a U.S. senator, wore her pearls in August when accepting the Democratic Party’s nomination for vice president. She has often worn pearls to important events, including her swearing in as a U.S. senator of California in 2017. Sorority members, as well as all women, regardless of their race, have been urged to wear pearls today and Virgin Islands’ AKAs will be joined by other local sororities – Delta Sigma Theta, Zeta Phi Beta and Sigma Gamma Rho — in wearing their pearls as they participate in the inaugural festivities with watch parties due to COVID-19 restrictions.

“The seating of the first Black vice president — Vice President-elect Kamala D. Harris, is a magnanimous accomplishment and we couldn’t be more proud,” Julice Holder, president of the Sigma Theta Omega Chapter, told The Daily News. “She continues to break [glass] ceilings, give us hope and instill a strong sense of pride, all while wearing her pearls. I look forward to the inauguration with great excitement.”

The inauguration of Harris is an important milestone for both AKAs, women in general and future generations of leaders. For Tresa Civil, president of the Mu Gamma Omega Graduate Chapter on St. Croix, Harris’ rise is a signal to young girls that they can be whatever they dream of being.

“I think this is significant, not just for the sorority, because this is something our founders possibly dreamed about in the past, but definitely for girls, black or brown girls, or any girls, to see someone elevate to this magnitude,” she said. “So, this is something that’s not only for us, but for females all over. This is somebody like us, an everyday person like us, that we see now has elevated to this level, so we are definitely proud of her.”