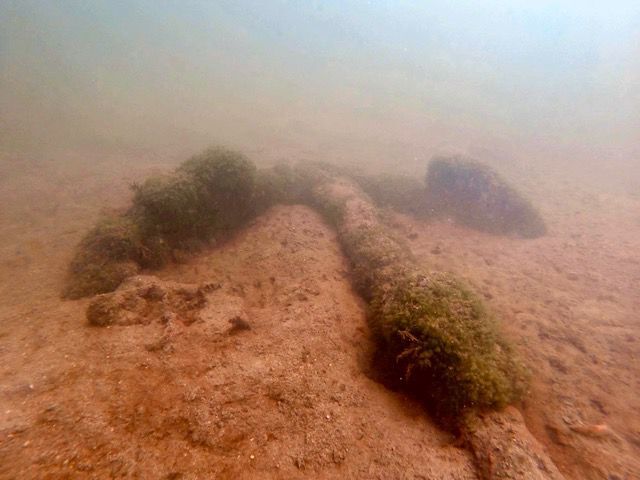 An anchor from a ship believed to be of early 1700 vintage that sits at the bottom of Coral Bay. 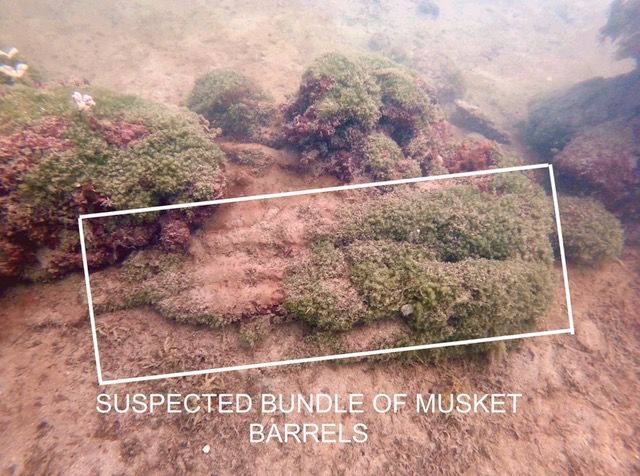 Artifacts from the historic shipwreck include these suspected musket barrels. 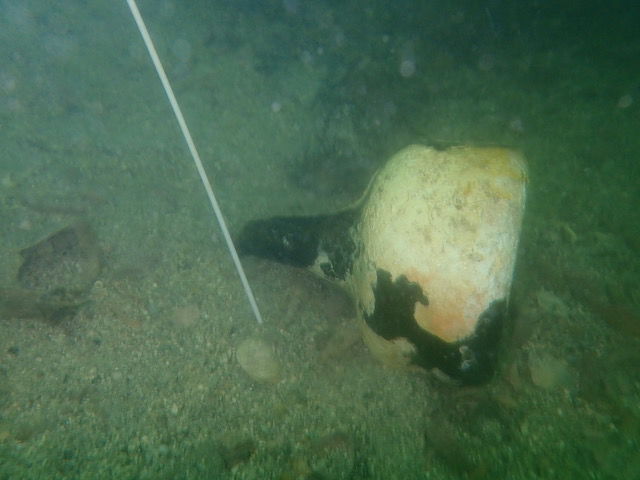 {span}A bottle that would have contained spirits like rum or wine dates to the 1730s. Photo by Colin Hanson{/span} 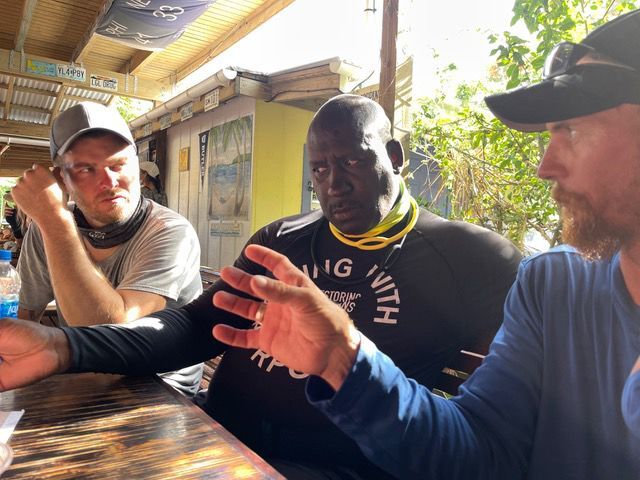 An anchor from a ship believed to be of early 1700 vintage that sits at the bottom of Coral Bay.

Artifacts from the historic shipwreck include these suspected musket barrels.

{span}A bottle that would have contained spirits like rum or wine dates to the 1730s. Photo by Colin Hanson{/span}

Sometime in the early 2000s, St. John resident Colin Hanson was hired to dive Coral Bay in search of a solar panel that had blown off a boat moored in the harbor during a storm. What he found during that dive would lead to a major discovery whose significance was realized with the help of numerous partners, both local and from the U.S. mainland.

“The water in Coral Bay is very murky, and you can only see a few feet in front of you,” said Hanson. “I ran into a large shape which ended up being a ballast pile.”

Hanson had heard of the possibility of a historic wreck in the harbor over the years, a rumor that spread among the men who regularly dived there to care for the moorings. His attention was drawn once again to the potential shipwreck several years later when a diver who came across it while checking on moorings mentioned it to Hanson, knowing that he and his wife, Leah Randall Hanson, were interested in history and shipwrecks.

Hanson dove the potential wreck site again in 2016, when he found evidence that the shipwreck was from the early 1700s, and was possibly even related somehow to the island’s 1733 slave insurrection. A cluster of musket barrels, a pile of ballast, an intact glass bottle, and clay Gouda pipes began to reveal the ship’s history.

“Bottles are one of the best things to date shipwrecks, because in the 1600s through 1800s, they changed shape almost every couple of years and they were very breakable,” said Hanson. “The Gouda pipes would also change shape every four or five years to a different style. At that point, we knew how old the wreck was.”

Hanson reached out to the V.I. State Historic Preservation Office, which granted him permission to do a light hand fanning excavation of the wreck, provided they had a professional archaeologist with them for the excavation. Virgin Islands National Park Archaeologist Ken Wild was consulted, and once he gained permission from the Department of the Interior’s Departmental Ethics Office to join the dive — provided he did it on his own time using his own equipment — the team dove the Coral Bay wreck together.

“It’s a classic 1730s bottle,” said Wild. “We had all three elements and were able to figure out the basic information on what this wreck was. We immediately recognized that this is from an important chapter in the island’s history.”

With the ship dating close to the time of the 1733 insurrection, it’s possible it came to the island to resupply the plantations, though evidence also suggests the ship may have arrived carrying human cargo — enslaved Africans.

Wild submitted his report to SHPO, which prompted archaeologist David Brewer to reach out to Diving With a Purpose, a Nashville, Tenn.-based nonprofit professional advocacy organization that is dedicated to the conservation and protection of submerged heritage resources. In mid-July, Diving With a Purpose’s Jay Haigler came to St. John to dive the wreck with Hanson, marine archaeology consultants SEARCH, Inc., and co-founders of the Society of Black Archaeologists.

Through documentation and remote sensing of the area, the team determined that the wreck was indeed a sailing ship from the 18th century. The silt that blankets the bottom of Coral Bay has buried a significant portion of the ship, which Haigler guessed is between 40 and 50 feet long.

“The ballast stones are significant, because during the 17th and 18th century maritime era, these were frequently used when human cargo was part of the manifest,” said Haigler. “It becomes a very interesting conversation.”

Diving With a Purpose is still analyzing the data gathered at the site, but even though the analysis is ongoing, Haigler said the wreck is worthy of further investigation.

“It’s clear that more analysis should be done on this ship to get a fuller history of what the ship is,” said Haigler. “Our position is that it’s important that a full historical archaeological documentation of the ship occurs, so the story of this ship and its connection to the landscape is told. What is the story of that ship? What are the stories of the people on that ship? What’s the story of what the ship was doing and what it meant to the residents of the land? It’s paramount that these stories be researched and accurately told.”

Haigler said it could take another six months before his organization’s analysis of the data they collected is complete.

Archaeologist Emily Lundberg, who reviewed Wild’s report, sent a letter to Sen. Myron Jackson sharing how the wreck could help present-day descendants of enslaved Africans learn more about their heritage.

“The site is a repository of information about an historical era from which there are scant written records,” she wrote. “Such written records as do exist for the 1730s-1740s, when a slavery-fueled plantation economy dominated colonial St. John, were created by the social class in power. Archaeological sites have the potential, however, to shed light on less-known economic enterprises and on the lives of enslaved or free Africans who are less visible in the Danish records.”

Getting the attention the wreck deserves has been a long, ongoing task for the Hansons, said Leah Randall Hanson.

“Because of our love of history and shipwrecks, we knew the value and historical nature of the wreck way back when,” she said. “This has been about getting people to listen to us. When you’re not an archaeologist, it’s really difficult.”

The Hansons’ persistence, as well as assistance from local partners including Busy Bee Charters and Bioimpact’s Amy Dempsey, was a key feature of Diving With a Purpose’s visit to the island, said Haigler.

“This was truly a community effort, which is usually not the case,” he said. “The community involvement is a tremendous plus. It ensures that the proper thing is done relative to these submerged heritage resources. Their involvement and continual interest is not only critical, but it’s something that will enhance the resources that are there.”

National Park archaeologist Wild said he was grateful for the Hansons’ persistence in bringing attention to the historic wreck.

“What happens next is up to SHPO,” he said. “I’m just so happy it’s been recognized and I hope it will be protected. What’s come out of all this is super gratifying.”