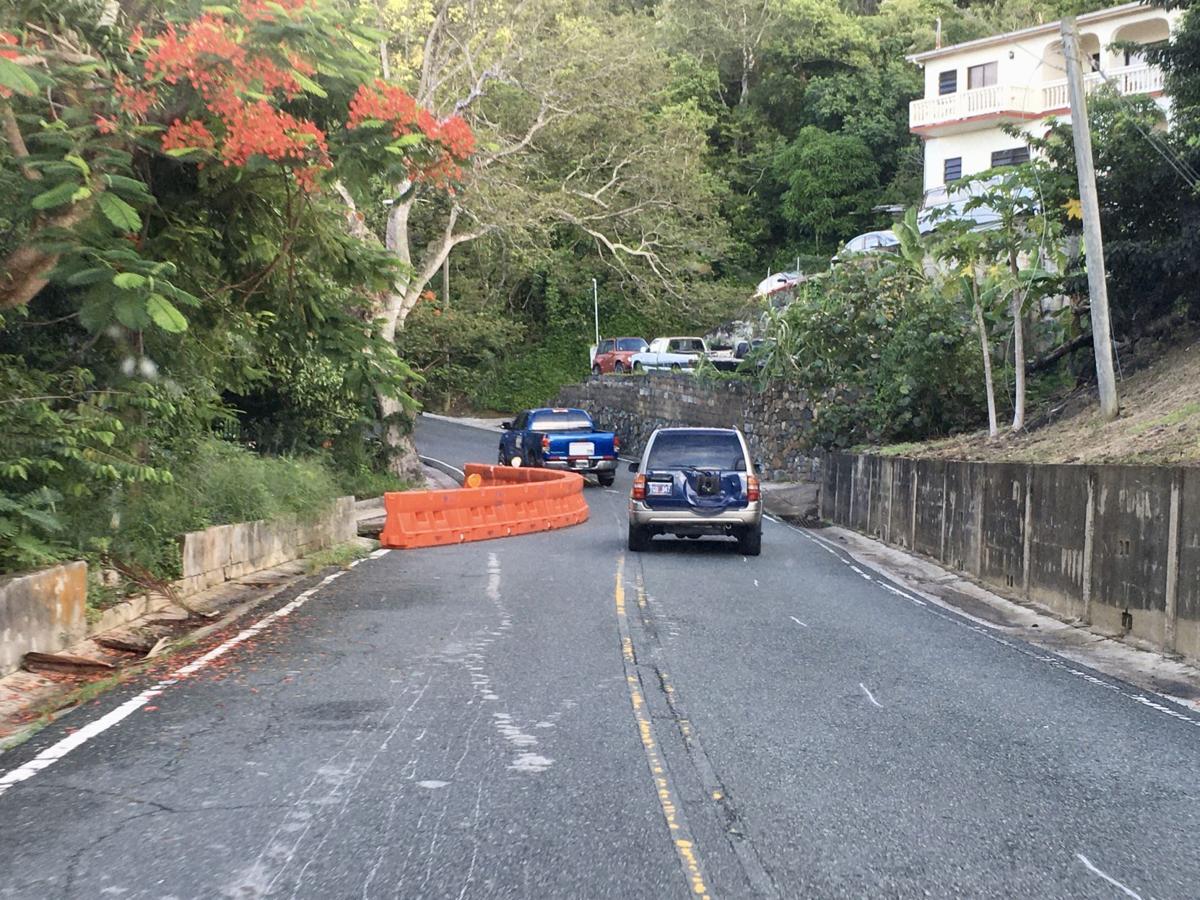 Cars are forced to navigate a one-lane bottleneck on a curve on Crown Mountain near the entrance to Shibui condominiums after part of the road eroded following the 2017 hurricanes. 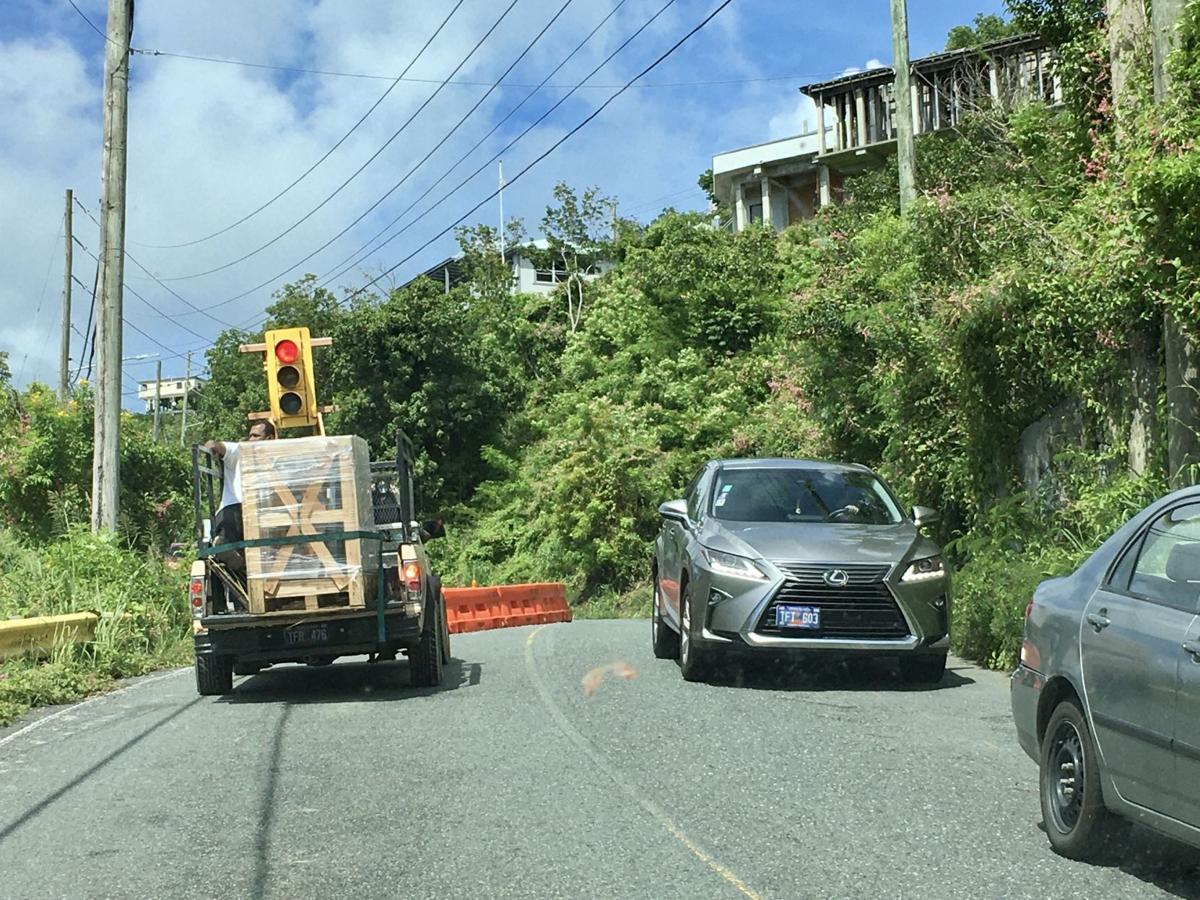 A barrier on Mafolie Road is one of several one-way bottlenecks on St. Thomas that will eliminated by upcoming construction projects, according to Public Works Commissioner Nelson Petty Jr.

Cars are forced to navigate a one-lane bottleneck on a curve on Crown Mountain near the entrance to Shibui condominiums after part of the road eroded following the 2017 hurricanes.

A barrier on Mafolie Road is one of several one-way bottlenecks on St. Thomas that will eliminated by upcoming construction projects, according to Public Works Commissioner Nelson Petty Jr.

“Although we talk about all the money that’s available to us for projects, there’s a process that we have to go through,” Petty said Tuesday of the period from obtaining funding and project design to construction.”

He said the department recently awarded several design contracts “and those take up to a year to complete in such instances, or in some cases up to 18 months. So, until those designs are complete, we can’t go to construction.”

Petty, a holdover from Gov. Kenneth Mapp’s administration, asked for the community’s patience as crews work to improve vital infrastructure.

Petty promised as much nearly a year ago when motorists on St. Croix advertised their frustration on billboards. In November 2019, Petty told The Daily News his department had 400 pending projects, including road repairs, needing completion. The acknowledgement was in response to signs in bright yellow and black that had cropped up on trees and poles across St. Croix asking Petty to repair roads. On St. Thomas, residents had taken to painting circles around some potholes — sometimes planting trees in them — to express their frustrations and leaving notes on the roadways.

“I get the frustration of residents,” Nelson said at the time, noting then that he did not have a timeline for the repairs.

On Tuesday, he said, he sees a “brighter future” as far as road repairs go.

According to Petty, in cases where the V.I. Water and Power Authority is repairing or replacing water lines, his agency is trying to minimize future disruption by waiting until it’s practical to resurface roads, which means some stretches of streets are being left temporarily unfinished so they don’t have to be dug up a second time for a different utility.

In places like the Sunny Isle intersection on Melvin H. Evans highway on St. Croix and the St. Thomas waterfront, he said “unfortunately WAPA at times has issues with their underground facilities and they go in and they have to do emergency repairs” and “unfortunately, the repair doesn’t happen quickly enough.”

Public Works is working with WAPA to expedite such projects, with an eye to future utility repairs, he said.

According to Petty, the department has already awarded a $1 million contract for road paving in areas such as downtown and around the District Court on St. Croix, but is waiting on WAPA to complete work. The V.I. Waste Management Authority has also put in a bid to replace sewer lines, so “as soon as they’re finished,” Public Works will resurface the roads.

WAPA spokesman Jean Greaux Jr. said when reached Wednesday that contractor Leumas Engineering “has been filling in the holes temporarily pending asphalt paving,” in the area of King Cross Street, and is expected to begin paving that street soon, and begin working on remaining streets on Oct. 26.

“The asphalt company subcontracted to perform the paving, VIAPCO, has been offline for weeks and is expected to be operational at the end of next week,” Greaux said.

“We’re trying to make sure we take our time to include all the utility companies so when we start moving to the major recovery projects we want to do those one time, and we have heavy coordination with our utility companies to put their infrastructure on the ground and give them the opportunity at least,” Greaux said, adding it’s a “major part of how we plan to move forward” with projects funded by the Federal Emergency Management Agency, Community Development Block grants, and other federally funded upgrades.

According to Petty, following the 2017 hurricanes, the Federal Highway Administration awarded Public Works $80 million for road projects, but “we didn’t get our allotments, our funding, when the projects were approved.”

“The funding comes in waves, basically,” and is being used for repairs as well as new traffic signals and other improvements, he said.

A round of funding was recently approved for several projects, including repair of an eroded and collapsed section of Mafolie Hill on St. Thomas.

The contractor has been mobilized and “we expect some excavation” in the coming days, Petty said.

Another eroded section of Agriculture Hill on St. Thomas has left a dangerous one-lane road around a blind curve, and Petty said that repair is coming soon as well.

Repairs to a lower section of Crown Mountain and “a number of landslides along Centerline Road on St. John” are also among the upcoming projects Petty said will help improve roads that were damaged by severe flooding during the 2017 hurricanes.

In addition to repair work, AT&T contractor Bermudez, Longo, Diaz-Masso LLC of Puerto Rico has been excavating trenches to install underground fiber optic cable throughout the territory, and has been working in several areas on St. Croix in recent weeks. On St. Thomas, installation work is happening in Smith Bay, Mandahl, Wintberg and Crown Mountain; and on St. John along Centerline Road, and will continue through month’s end, according to a news release from the company.

Petty said this is just the first phase of the installation project, and a timeline for subsequent phases is not yet complete. As work progresses, different areas will be in different stages of completion. Crews are patching holes with concrete, leaving some roadways uneven, but allowing cars to pass safely in the short-term.

When installation is finished and crews have enough work to make resurfacing efforts practical, there will be a “complete asphalt overlay,” Petty said. “These trenches are very small and it requires a lot of distance to be able to make it viable to put a crew out there to patch any length of road.”

In addition to the trenches, workers are installing “traffic rated” electrical manholes known as “pull boxes” so technicians can access and repair the fiber optic cables.

There were some initial problems with the contractor and “quite frankly I’ve had to stiffen some of my hold on them to make sure they do a better job because everyone sees what was going on. There were some communication issues,” Petty said. “We had to stop them once before to make sure they’re abiding by the rules and regulations that we’ve established and they’ve been doing a much better job.

In terms of future road projects and other hurricane recovery efforts and infrastructure upgrades, “we’re going to be doing this for several years,” Petty said, and asked drivers to be patient around construction sites and keep workers safe.

“It’s good for the economy, it’s good for us — but the light at the end of the tunnel is what we’re looking at, and I think that’s where the benefit comes in when we’re all done with this,” he said.

On St. Thomas, work on the Main Street project is expected to be complete in December, and Veterans Drive will be finished some time in mid-2021, Petty said.

While road repairs will continue into the foreseeable future, “looking at the big picture, I can see a much brighter future,” Petty said.