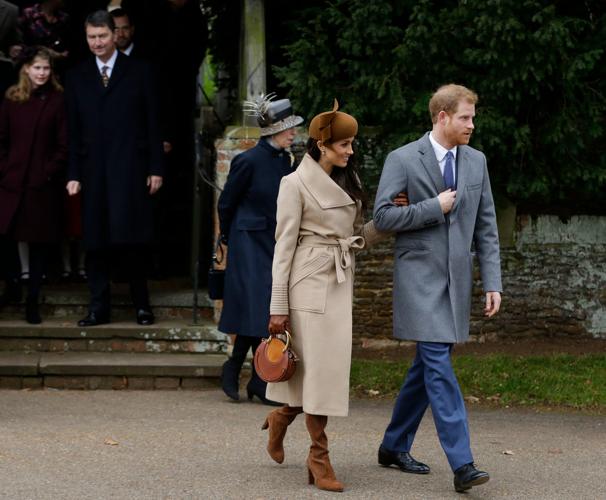 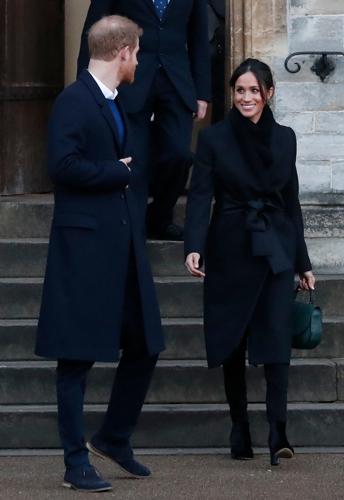 FILE - In this Thursday, Jan.18, 2018 file photo, Britain's Prince Harry and his fiancee Meghan Markle leave after a visit to Cardiff Castle in Cardiff, Wales. When Meghan wore The Dina style jean from the Hiut Denim Company, there was worldwide publicity about a firm in Wales which started to re-employ workers displaced when the local factory closed. (AP Photo/Frank Augstein, file)

FILE - In this Thursday, Jan.18, 2018 file photo, Britain's Prince Harry and his fiancee Meghan Markle leave after a visit to Cardiff Castle in Cardiff, Wales. When Meghan wore The Dina style jean from the Hiut Denim Company, there was worldwide publicity about a firm in Wales which started to re-employ workers displaced when the local factory closed. (AP Photo/Frank Augstein, file)

LONDON (AP) — Canadian fashion designer Bojana Sentaler stared at her computer screen on Christmas Day to see if Meghan Markle had a gift for her.

She did. As Prince Harry’s future bride left a church service on the grounds of Queen Elizabeth II’s private country estate, Sentaler spotted a cuff detail on Markle’s camel alpaca coat that told her customers would soon be flocking to her website.

“I was looking for the ribbed sleeves, hoping it was a Sentaler coat,” said the designer, who met Markle when she was a mere TV star. “And as soon as I saw that, I was so happy and so excited! And it was the best Christmas present I could ever wish for.”

The Meghan magic was almost instantaneous; Markle’s coat sold out, as Sentaler expected, and the publicity fueled sales of other designs. Now part of an elite circle of entrepreneurs tapped with the monarchy’s golden touch, the designer plans to expand her presence in London.

Markle’s marriage to Harry isn’t just a trans-Atlantic love story linking the House of Windsor to Hollywood. The couple’s May 19 wedding is likely to have dividends for the designers, florists, bakers and tiara makers who are directly part of it, as well as for businesses much farther down the line of affection.

The glamorous bride-to-be alone is forecast to pump 150 million pounds ($210 million) into the British economy as consumers try to mimic her style, according to economists at Brand Finance, which produces an annual report on the monarchy’s economic contributions.

In all, the wedding is expected to generate more than 1 billion pounds of economic activity, including 300 million pounds in tourism, particularly from Americans eager to be part of the occasion.

Marketers see Markle as a bonus from the royal family, since her engagement to Harry followed so closely on the sensible but very stylish heel of the former Kate Middleton, who married Prince William seven years ago.

But Markle, whose pencil skirts and stiletto heels graced the hit U.S. television show “Suits” for seven years, brings fresh sparkle to the picture. Having her showcase a coat, handbag or service is like being associated with a fairy tale, just like when Grace Kelly married Prince Rainier III of Monaco in 1956.

“It’s something that the U.S. does not have. It’s the rags-to-riches story. It’s the whole Cinderella story yet again.”

The back story makes Markle of huge interest not just to Americans — who sometimes seem more fascinated by the royals than their own subjects — but also other royalty-loving countries like Japan, which marvels at the Windsors moving into the 21st century.

“The last time there was something like this was when Grace married Rainier, and he was just a petty potentate,” said David Haigh of Brand Finance.

The royals don’t advertise, but they do set trends and showcase whatever they might be wearing, seeing or doing. Whether it was Queen Victoria popularizing trees for Victorian Christmases or Princess Diana and her ruffle collars, people have long tried to emulate their style.

But these days, the royal effect is supercharged by social media. The internet offers a running commentary on everything the royals do, and their fashion choices are photographed, scrutinized and instantly identified. Websites such as whatkatewore.com and its sister site, whatmeghanwore.net quickly pinpoint the designer and sometimes tell a bit of a garment’s story.

When Meghan wore The Dina style jean from the Hiut Denim Company, there was worldwide publicity about a firm in Wales which started to re-employ workers displaced when the local factory closed. Handbag designer Charlotte Elizabeth, a small firm supported by The Prince’s Trust charity, warns of long waits and unprecedented demand now that Markle is part of the equation.

American Susan Kelley, founder of whatkatewore.com, said Markle has proved to be more cognizant of the impact of her choices than the Duchess of Cambridge. That may be because as a former actress, she brings to her new public role a greater sensitivity to the messages sartorial selections contain.

“I think Meghan understands sartorial diplomacy and understands it to the level that she wants to expose smaller artisanal brands to the general public,” Kelley said. “It’s a tremendous economic driver, a tourism driver and a platform to draw attention to the charitable endeavors they think are important.”

Anyone who has been sucked into this vortex can vouch for the impact of even an unplanned product sighting. Just ask Raegan Moya-Jones, co-founder of aden + anais, a baby products company based in New York.

After the world got a 45-second look at newborn Prince George in one of the company’s signature muslin swaddles five years ago, aden + anais’ website crashed within four hours. The next day, the site crashed again, Moya-Jones recalled. The company had 7,000 orders — a 600 percent increase in sales — in nine days for the “royal swaddle” that popped up in search engines.

Moya-Jones, who is originally from Australia, said that while it is a wonderful thing “to be able to drop into conversation that you dressed the royal baby,” the tsunami of attention ended almost as quickly as it began.

“The royal effect doesn’t guarantee you success,” she said. “But it’s a lovely notch in the belt.”