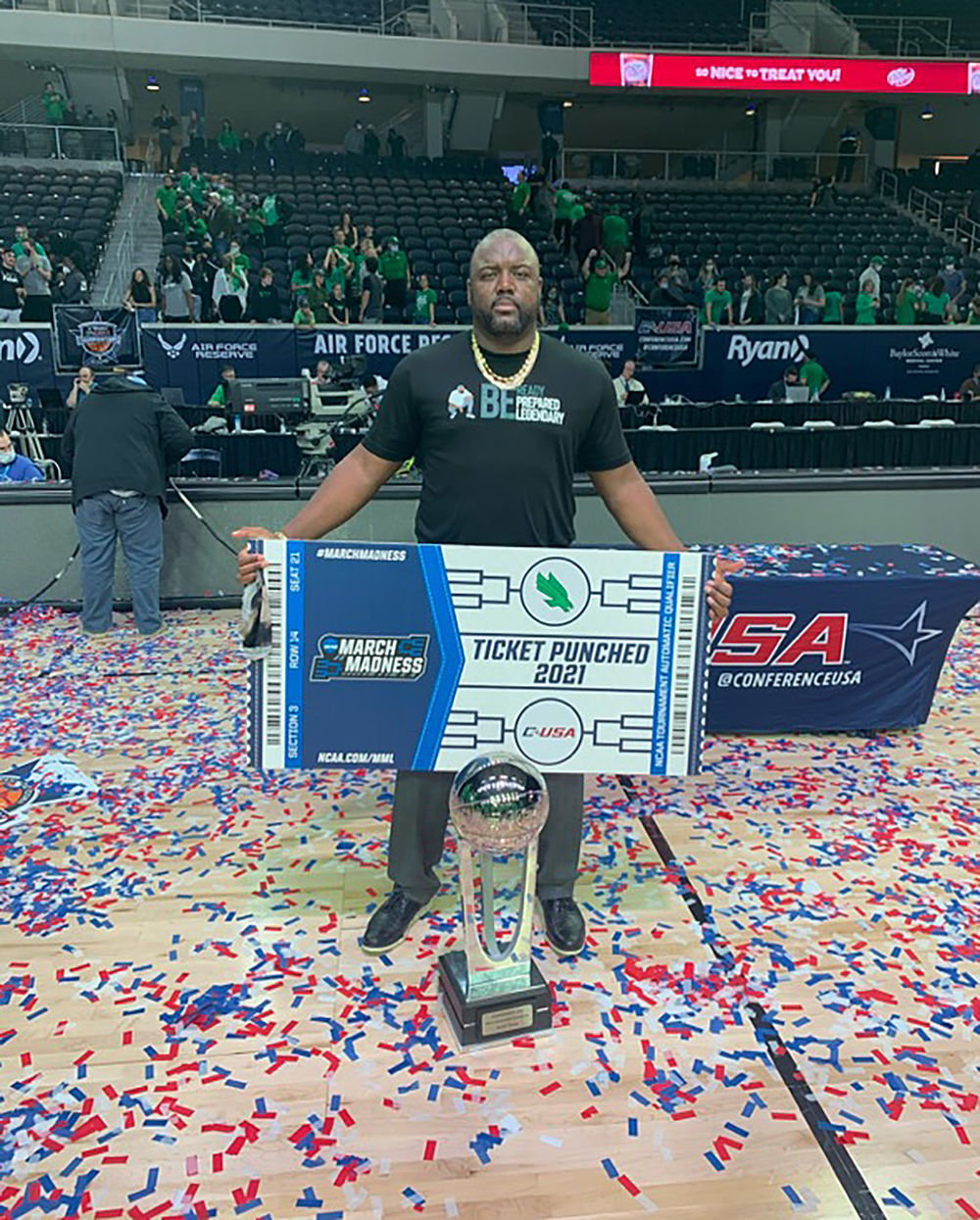 Jareem Dowling and the trophy

North Texas assistant coach Jareem Dowling, a native of St. Croix, stands with the championship trophy and the Mean Green’s “ticket” to the NCAA Tournament after winning the Conference USA tournament Saturday in Frisco, Texas.

Jareem Dowling and the trophy

North Texas assistant coach Jareem Dowling, a native of St. Croix, stands with the championship trophy and the Mean Green’s “ticket” to the NCAA Tournament after winning the Conference USA tournament Saturday in Frisco, Texas.

“Man, I’m trying to figure out HOW to sleep,” he said.

March Madness will do that to a person.

The St. Croix native’s lack of sleep has come from excitement, after the Mean Green won the Conference USA Tournament on Saturday night —and with it, an automatic berth in the NCAA Tournament, the school’s first appearance in 11 years.

It’s also Dowling’s first trip to “the Big Dance” after nine seasons as an assistant coach at the NCAA Division I level, and 16 years of coaching experience overall. He also has coached the U.S. Virgin Islands men’s national teams in FIBA competition.

“It’s been a long 16 years,” Dowling said in a telephone interview Monday. “It’s always been a dream — 15 years coaching in college, a year coaching in prep school, and playing eight years just to get here.

“It’s an unbelievable feeling. I’m running on adrenaline, just being up from excitement. All the years, driving from state to state to recruit players, hopping on planes, all the players I’ve coached. I’ve been on teams that had a chance to get to the Big Dance, but they came up short for some reason.”

That streak could have ended last year for Dowling and North Texas, which won the C-USA regular-season title and had the No. 1 seed for the conference tournament.

The COVID-19 pandemic ended that chance, with first the conference tournament being canceled, and then the NCAA Tournament.

But Dowling said that set in motion the determination to get back in that position this season.

“I knew this team was special,” Dowling said. “Coming off from last year, I know the guys felt gutted by what happened with the pandemic. It was just a bunch of determined guys that talked about going to the tournament, and wanting to experience it.

“They did it. To their credit, they did it. [The coaches] had little to do with it; they’re the ones that put the ball in the basket and defended. It’s just a joy to be a part of it.”

The Mean Green had to work for this one, though.

After closing out the season with three straight losses — missing out on both the C-USA regular-season title and a No. 1 divisional seed in the tournament — North Texas went on to win four games in as many days. The run culminated with a 61-57 overtime victory over Western Kentucky in the tournament’s championship game.

“Those guys, losing on Senior Night, it really left a bad taste in their mouths,” Dowling said. “It was a driving factor to them being motivated going into the conference tournament and finishing the job.”

It also set up a busy 48 hours for the Mean Green’s players, coaches and travel group — and explains Dowling’s lack of sleep.

The following morning, the team boarded a charter plane at Dallas-Fort Worth International Airport in Texas for the two-hour flight to Indianapolis.

Since arriving, North Texas’ players, coaches and staff have been sequestered in their hotel in downtown Indy, waiting for the results of daily COVID tests.

“We had to be tested again before we could come to Indy,” Dowling said. “Everybody had their own row on the flight. As soon as we got here, we got tested again, then taken to our hotel. We’ve got a whole floor to ourselves. Everybody’s got their own room.

Again, March Madness will do that to a person. Dowling, for one, doesn’t mind it a bit.