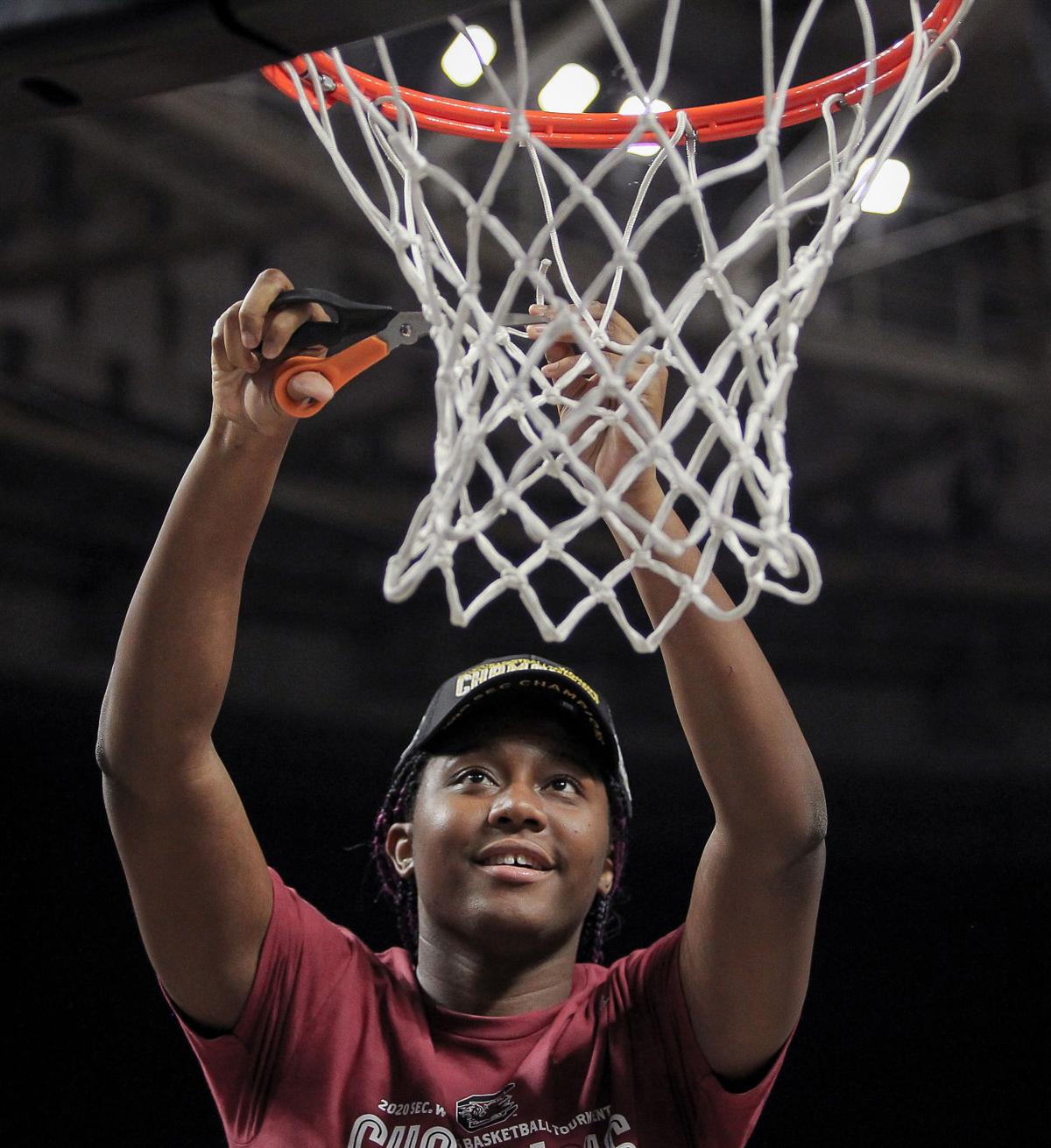 St. Thomas’ Aliyah Boston cuts a strand from the net after South Carolina won the Southeastern Conference tournament March 8 in Greenville, S.C. That earned the Gamecocks an automatic berth in the Women’s NCAA Tournament, only to see it disappear when the tournament was canceled four days later because of the COVID-19 pandemic.

St. Thomas’ Aliyah Boston cuts a strand from the net after South Carolina won the Southeastern Conference tournament March 8 in Greenville, S.C. That earned the Gamecocks an automatic berth in the Women’s NCAA Tournament, only to see it disappear when the tournament was canceled four days later because of the COVID-19 pandemic.

It’s the lost chance to cut down another set of nets — after winning the NCAA Tournament — that still sticks with Boston and the rest of the Gamecocks’ players and coaches.

That’s why the St. Thomas native — not to mention her teammates — take a sense of unfinished business into South Carolina’s 2020-2021 season, which begins today against College of Charleston in Columbia, S.C. Game time is 1 p.m. Atlantic.

“That’s definitely something that we’ve talked about — just competing so that we can get another chance at making the NCAA Tournament, and a chance at winning it,” Boston said.

“We’ve been using that as motivation, especially in practice. We’ve been working hard, and doing what we have to do so we can get back to what we didn’t get to do last [season].”

Last season, the Gamecocks had been on a roll — the SEC tournament title game South Carolina a 26-game winning streak heading into tournament selection time as the nation’s top-ranked team. Just a few days later, the worldwide COVID-19 pandemic — still in its infancy — ended all that, with the NCAA Tournament canceled.

Even just three months ago, there was a question if there would be a college basketball season at all, with the NCAA and conferences actively debating the issue.

That put a lot of teams and players — Boston included — on the fence as to what they should do.

As it turned out, the NCAA decided to have a basketball season — albeit one starting nearly a month later than usual, with limits on the number of games played, and strict COVID-19 testing protocols to be followed.

“It’s definitely going to be something that we haven’t experienced before,” Boston said.

“I’m excited for this, and I’m really ready. We just have to take it one game at a time, and just continue to be safe.”

“Take it one game at a time,” is a well-used sports cliché, but in the case of the sports world, it’s become reality as a positive COVID-19 test could force the postponement or cancellation of games.

“That’s the most important thing,” Boston said. “Just make sure we keep ourselves out of harm’s way, and doing the right things — making sure we wear our masks and wash our hands — so we can continue to give ourselves a chance to continue to progress.”

Boston said that the Gamecocks’ players, coaches and support staff all undergo COVID-19 testing three times a week, and have limited their social interactions to within the program.

“We’re holding each other accountable, because we know the consequences if we don’t,” she said. “If we decide we’re going to go out and do this and that just because we don’t want to be inside, then we are taking that risk to have to sit out for two weeks and to get games canceled because we wanted to have fun for 35 seconds.

“The coaches don’t really have to preach that or force it into us, because we know what’s at stake if we don’t.”

South Carolina enters the new season as the prohibitive favorite to win the NCAA title, with its first preseason No. 1 ranking in the Associated Press’ Top 25 poll.

A big reason for that is Boston, a unanimous choice for AP’s preseason All-American team. She’s also on the preseason watch lists for the Naismith and Wade trophies, both national player of the year awards, as well as on the Lisa Leslie Award watch list — an honor she earned last season as the nation’s top center.

“I think she’s ready for that challenge, but she’s got a lot of help,” Gamecocks head coach Dawn Staley said of Boston. “If we need a basket, I’d like to run it through her. She may not necessarily take the shot, but she draws a lot of attention. That will only open up opportunities for other players to get better looking shots.

“Aliyah’s ready … she’s one that can figure it out on the run, and she’s not going to take bad shots. I’m looking forward to seeing her spread her wings out a little bit.”

To Boston, the awards are nice, but not the important thing for her right now.

“I’d rather win than receive all these awards and not have a winning record,” she said. “I definitely want to get a shot at the NCAA Tournament, and winning an NCAA championship. But that’s not really what I’m focused on right now.

“We’ve got to take it one game at a time; we can’t hop forward to March or whenever the NCAA Tournament may be. There’s a lot of games in between then that can determine that.”