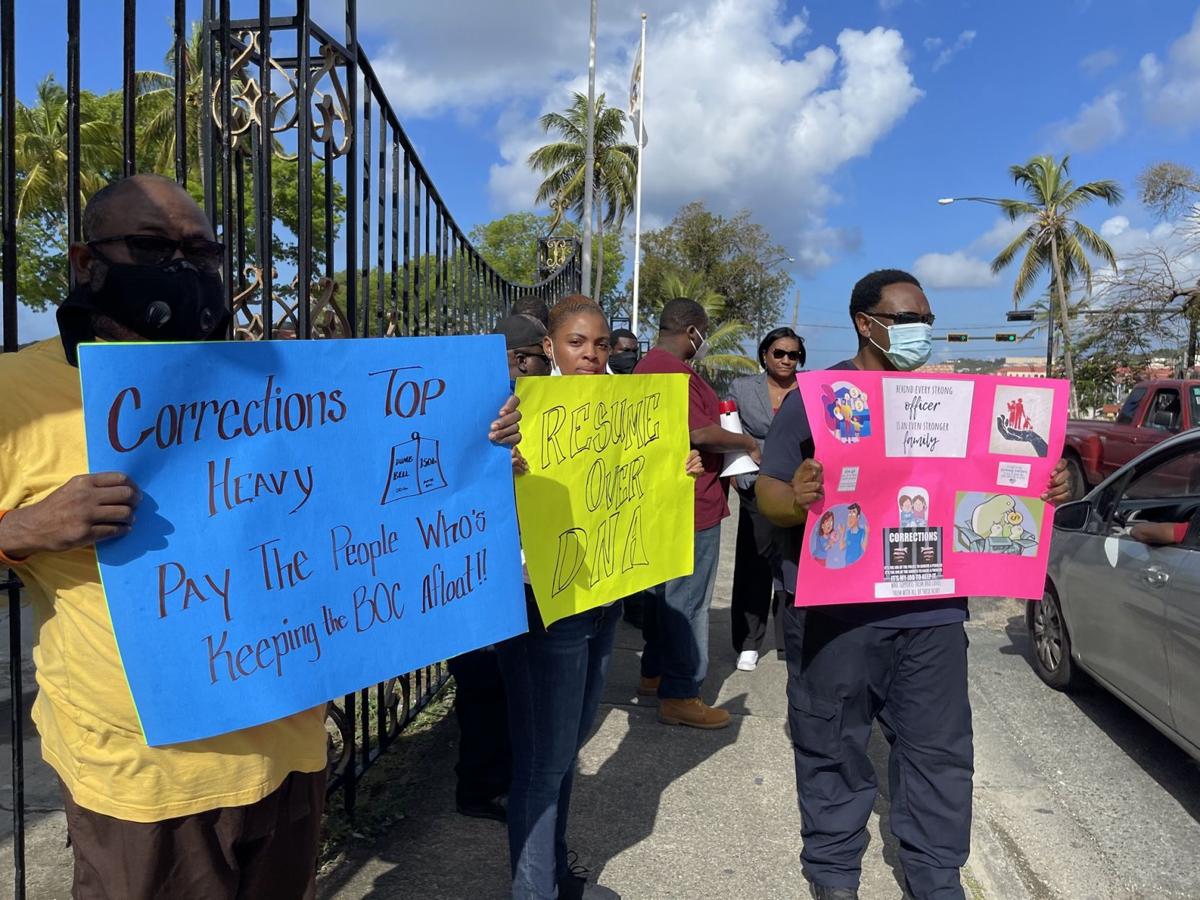 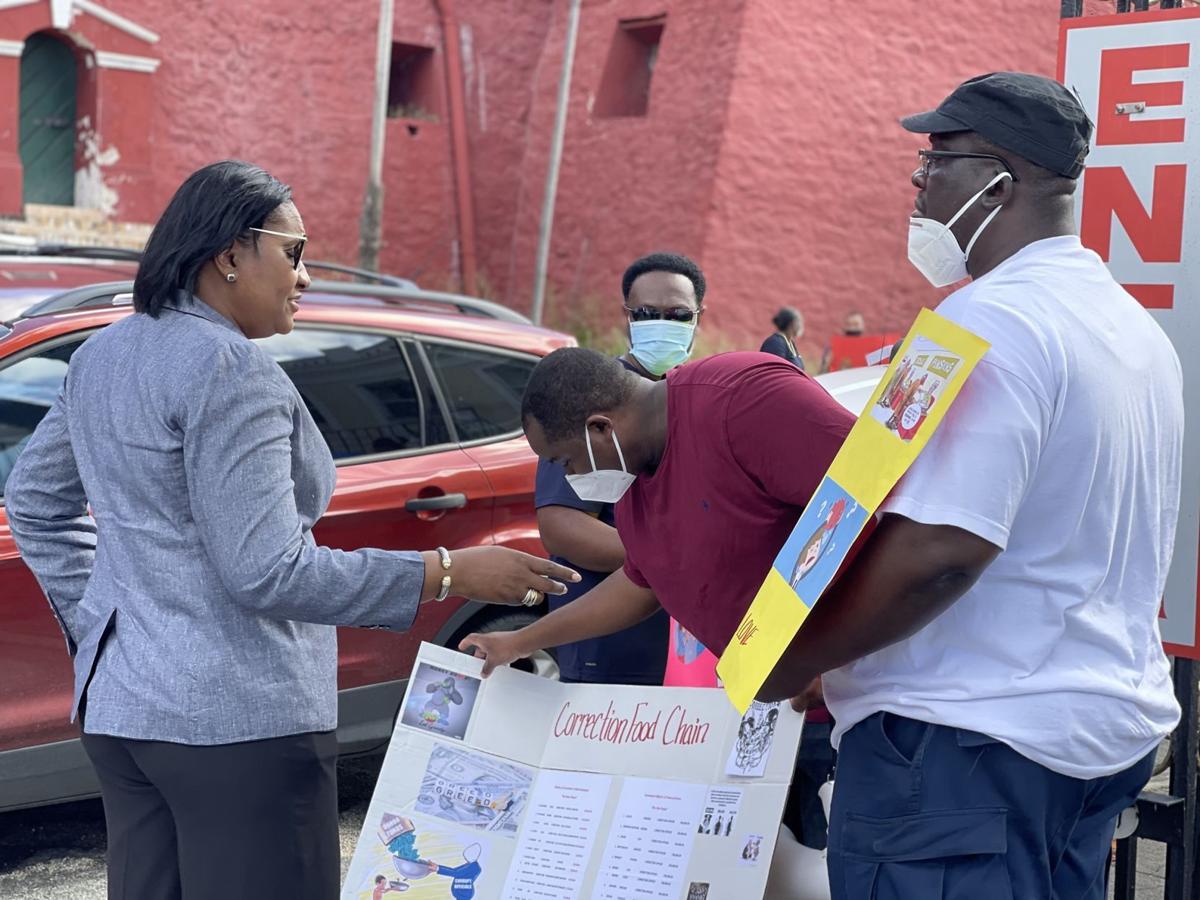 Senate President Donna Frett-Gregory speaks with corrections officers protesting low wages and under staffing in front of the Legislature on St. Thomas Wednesday.

Senate President Donna Frett-Gregory speaks with corrections officers protesting low wages and under staffing in front of the Legislature on St. Thomas Wednesday.

Corrections Bureau officers held a protest in front of the V.I. Legislature building on St. Thomas on Wednesday to air grievances over pay and chronic understaffing.

Senate President Donna Frett-Gregory, who left her office to speak briefly with the officers said they “felt that they were not being treated fairly.

Frett-Gergory said she has scheduled a meeting with Corrections Director Wynnie Testamark “because there’s always two sides to the story, so I need to get both sides.”

According to a statement issued by Kyza Callwood, the Bureau’s chief strategy officer and acting public information officer, most of the issues raised during the protest are “long-standing and pre-date the current BOC administration.”

The main complaint “is a nine-year-old grievance concerning the proper calculation of correctional officer overtime pay,” according to the Bureau.

Testamark inherited the grievance when she took over the Bureau in February 2019. The Bureau changed its payroll policy in November “for the first time since 2012” so correctional officers are now paid overtime after working eight hours in one day. Previously, they were paid overtime after working 40 hours in one week. This led to the 2012 grievance, according to the Bureau.

Bureau administrators met with correctional officers on April 6 to discuss the issue of proper calculation of overtime pay, and have been working with Finance Department officials and requested training for payroll employees. Implementation of 12-hour shifts in response to the pandemic has further complicated the issue, because V.I. law requires employees be paid time and a half overtime for more than eight hours worked in a single day and more than 40 hours in a week.

The law also requires that employees who work more than 48 hours in a week receive overtime at twice their normal pay.

“Because correctional officers on 12 hours shifts five days a week now work at least 60 hours each week, all three overtime rules come into play each work week: daily over eight, weekly over 40, and weekly over 48,” according to the Bureau. “Because the existing payroll software has not been programmed to properly adjust for the interaction of all three overtime rules, BOC employees who work on payroll must manually manipulate each correctional officer’s time card each pay period to ensure proper calculation of overtime.”

The Bureau has been working to address the issue and “is committed to ensuring that all of our correctional officers are paid what they are owed,” Testamark said in the statement.

“I fully understand that correctional officers have been waiting for nine years for a resolution of this issue,” she added, “and I have instructed our payroll team to take the necessary steps to ensure that their overtime is properly calculated and promptly paid.” Frett-Gregory said officers also expressed concerns about a lack of “equipment to do their jobs. They talk about not having the necessary weapons, Tasers, etc.” and “based on what I heard, I think those matters are low-hanging fruit.”

Callwood added that “to address staffing shortages, which leads to long hours and low morale, BOC has stepped up its recruitment and retention efforts, wherein we now have a total of 21 correctional recruits in various stages of the onboarding process: 15 on St. Thomas and six on St. Croix as part of its recently completed five-year strategic plan.”

Meanwhile, correctional officers are tasked with managing a large number of mentally ill prisoners because the Virgin Islands doesn’t have a suitable inpatient treatment facility where they can be housed.

“Part of what’s happening with the consent decree has a whole lot to do with the fact that we’re housing our mental health patients in the Bureau of Corrections,” said Frett-Gregory, who worked as director of operations for the Justice Department when it oversaw the Bureau.

The problem isn’t a lack of money to construct mental health treatment facilities in the Virgin Islands — “it’s will,” Frett-Gregory said. “We cannot continue to say funding is the issue. If we recognize mental illness is an issue in the Virgin Islands, we must address it.”