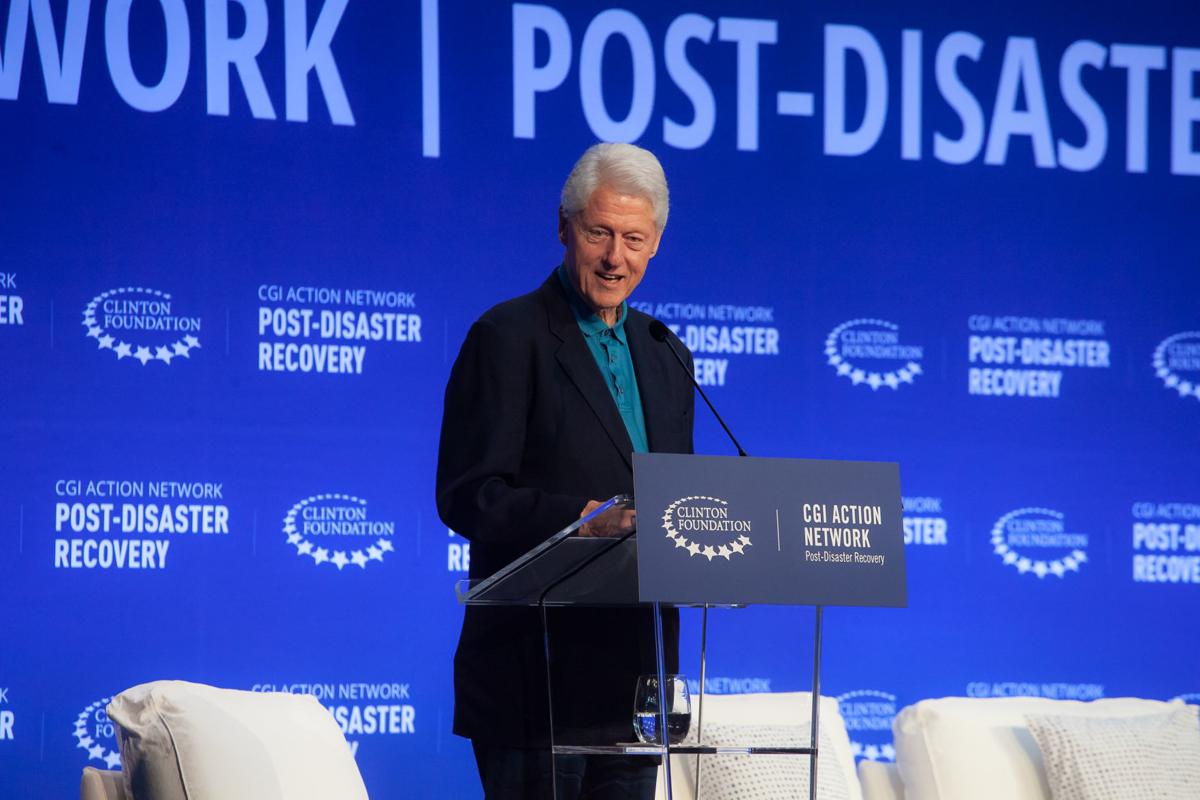 President Bill Clinton leads the panel discussion Monday for the opening session of the Clinton Global Initiative Action Network on Post-Disaster Recovery at the University of the Virgin Islands campus on St. Thomas. 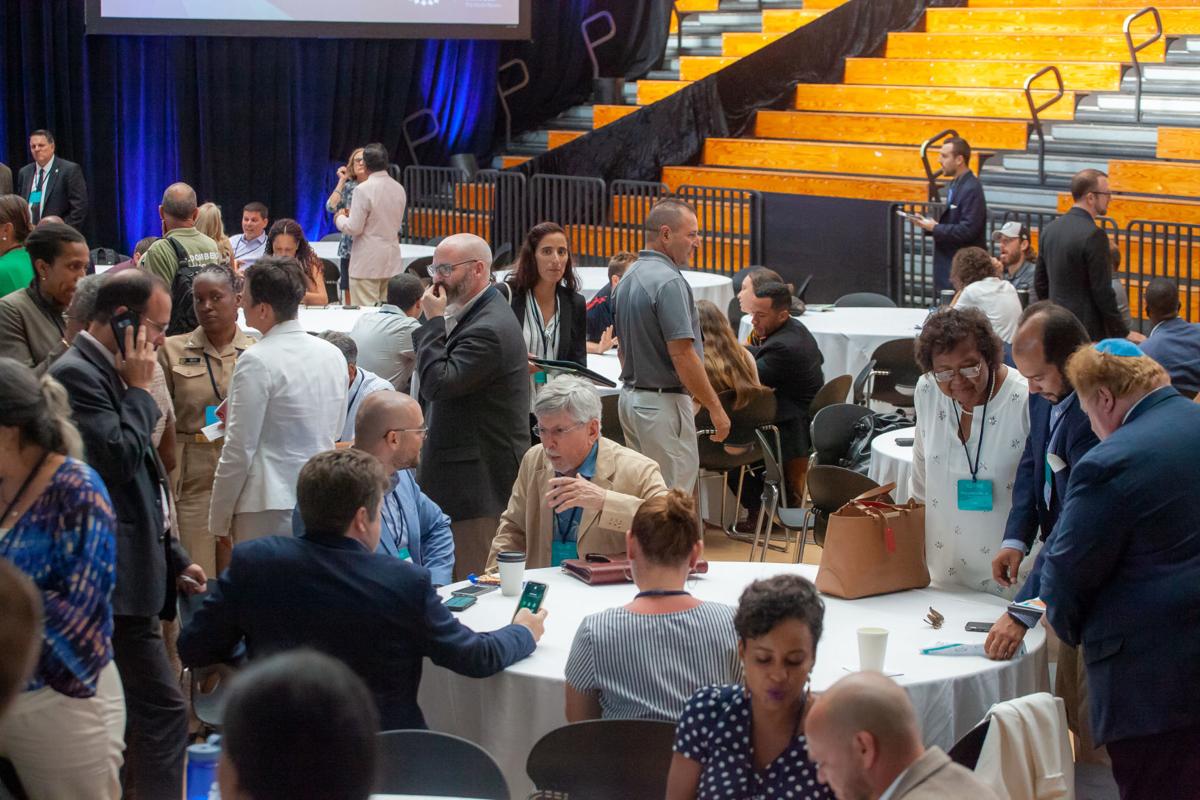 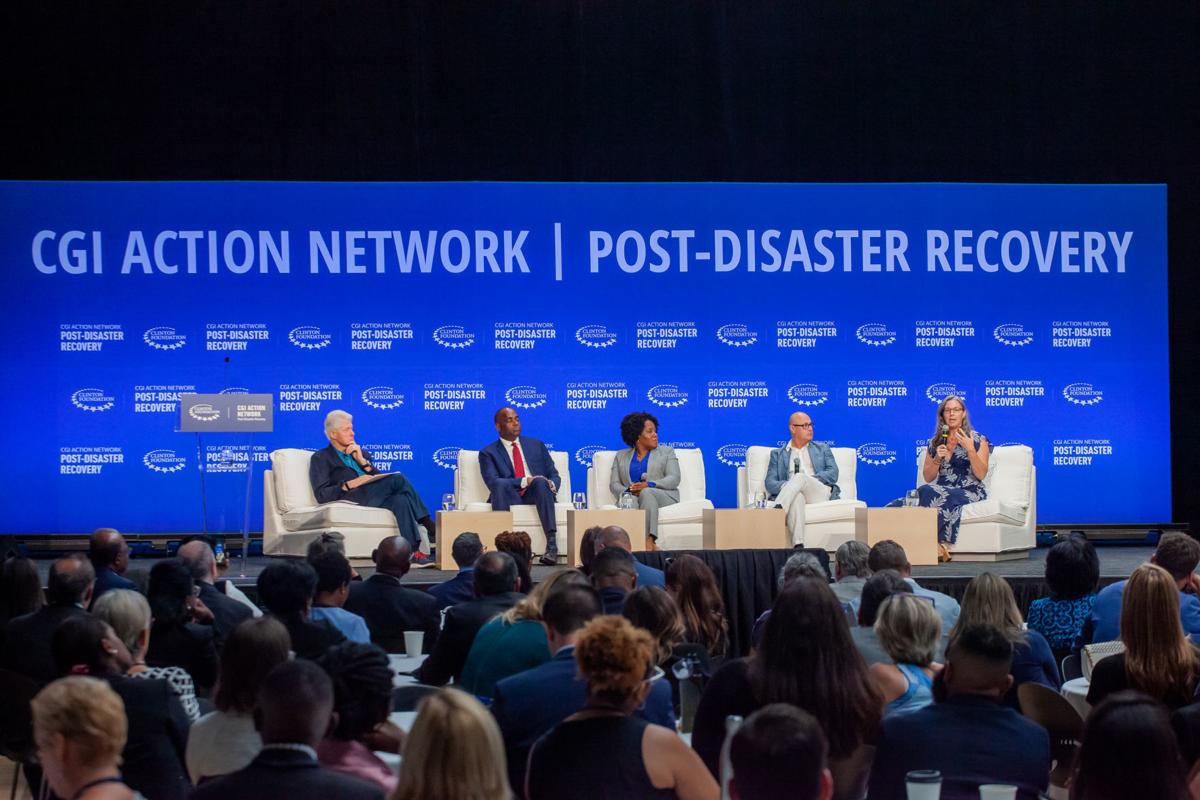 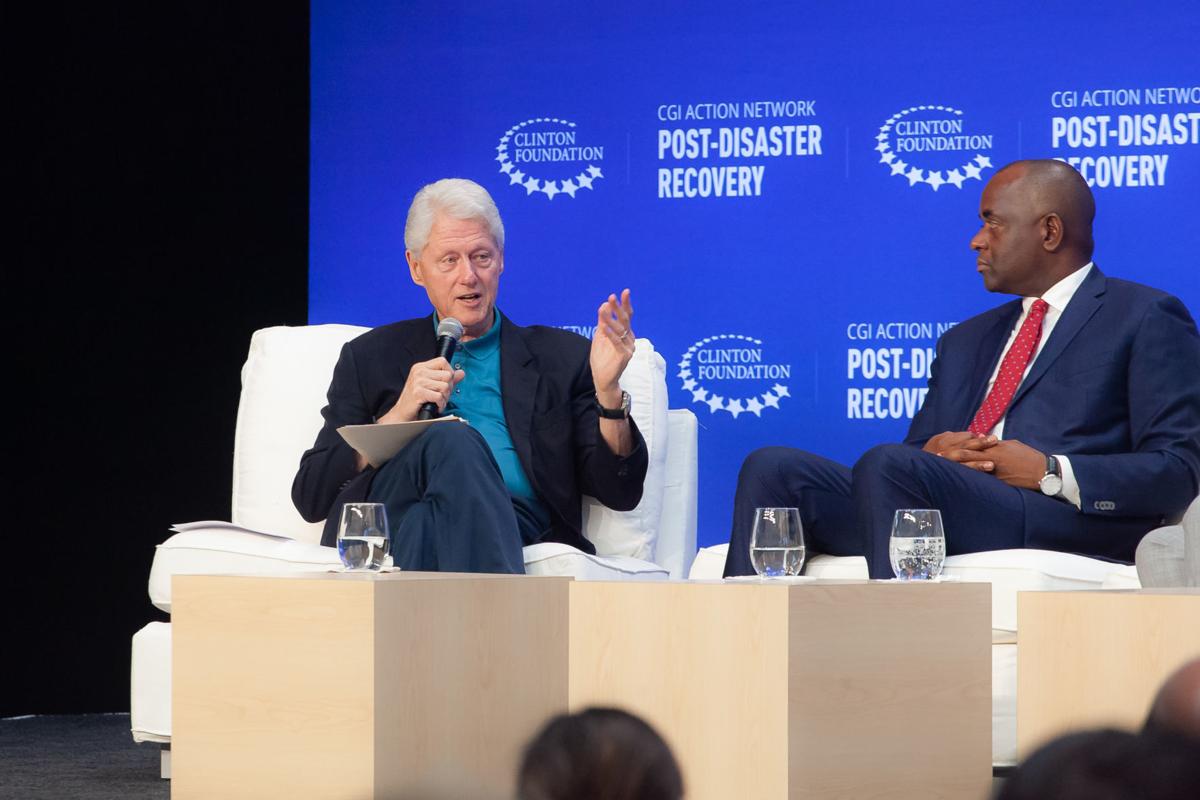 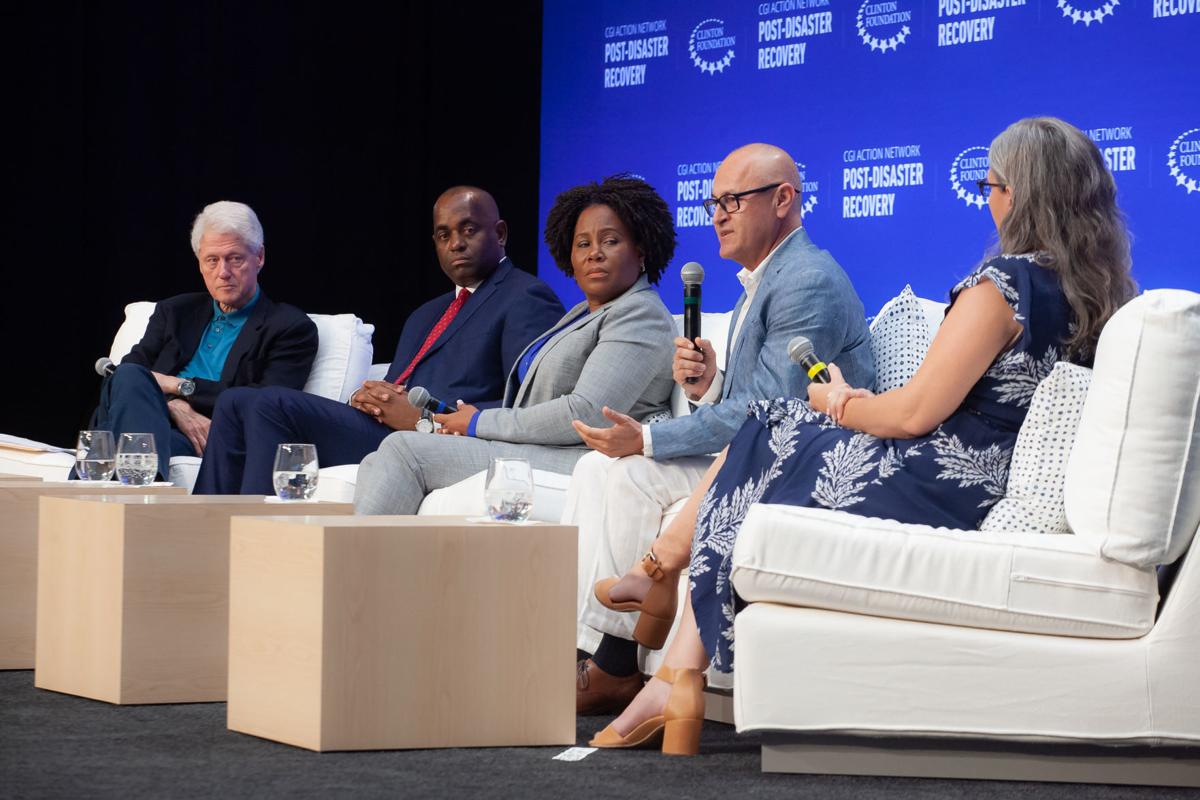 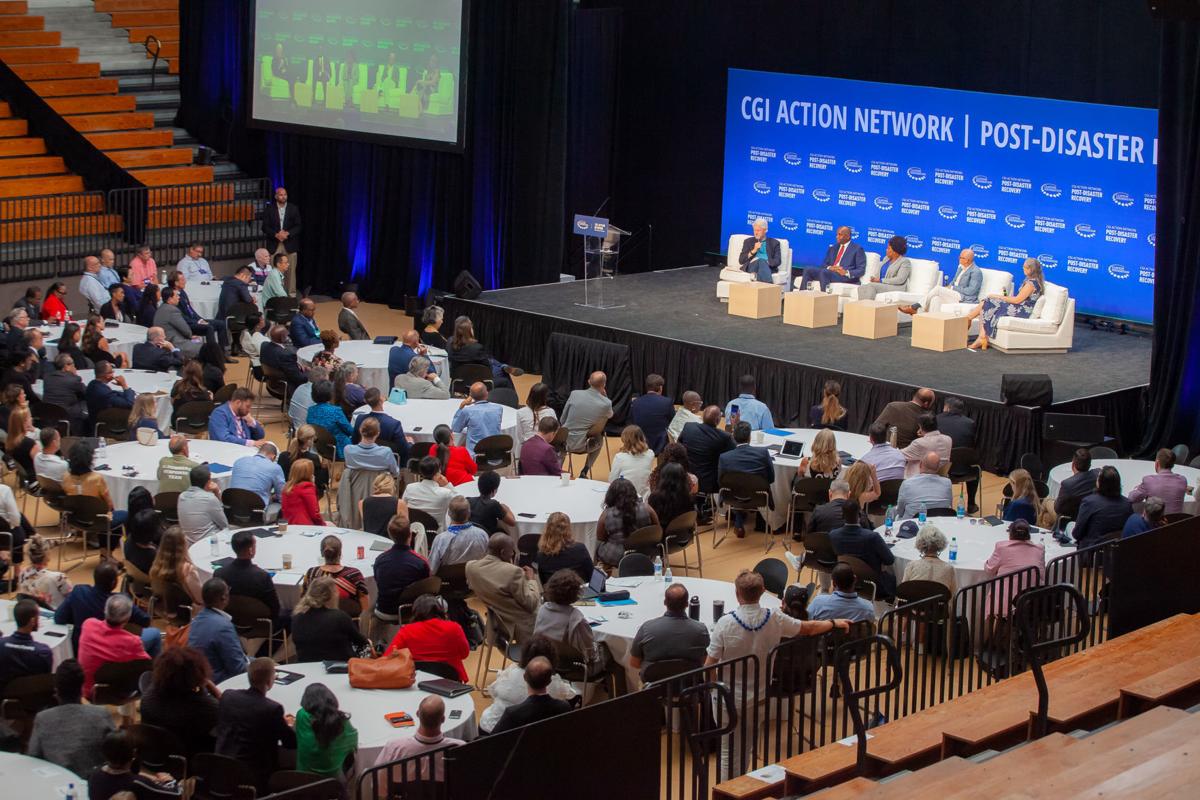 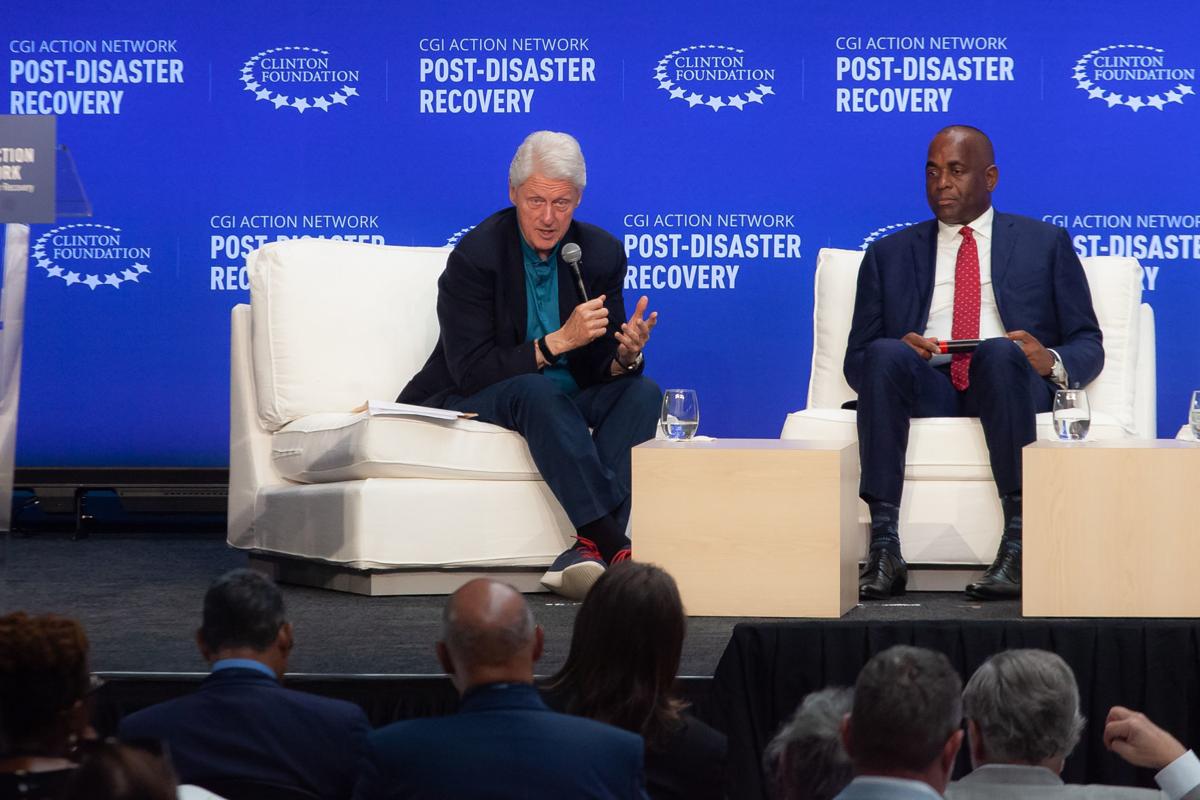 President Bill Clinton leads the panel discussion Monday for the opening session of the Clinton Global Initiative Action Network on Post-Disaster Recovery at the University of the Virgin Islands campus on St. Thomas.

ST. THOMAS — Former President Bill Clinton is urging the Virgin Islands and the Caribbean to set the world standard for disaster recovery, resilience and clean energy, calling the region an effective “ground zero” for both worsening storms and the bold, new ideas that will fend against them.

The remarks came Monday during a meeting of the Clinton Global Initiative Action Network on Post-Disaster Recovery, held at the University of the Virgin Islands on St. Thomas.

The first of a two-day conference, the meeting brought together more than 470 people from roughly 280 organizations, both public and private sectors, as well as nonprofits.

“You’re all here because you know the work is far from over,” Clinton said. “With the 2019 hurricane season upon us, the work of the network to ensure resilience, preparedness and sustainability of the Virgin Islands is more urgent than ever.”

Indeed, the urgency, according to Clinton, stems largely from climate change, which is not only making the Caribbean vulnerable to more intense storms, but is forcing nations to completely re-imagine how they prepare — and how they avoid — such destructive weather.

“Building a resilient future is not just about preparing for emergencies, it’s about reducing the severity of future hits,” Clinton said.

Skeritt, who is working to make Dominica the first-ever “climate resilient” country in the world, as well as 100% dependent on renewable energy sources, said it is imperative to be “proactive and preemptive” against the rising threat of climate change.

“We will be impacted more frequently and by more ferocious storms — so, in my mind, we have no option, we have no choice,” he said, to applause.

Clinton said the Caribbean, including the Virgin Islands, has the potential to be a leader in green energy, but has historically found it difficult to attract investors or find the right kind of leadership and partners.

“It’s just one example of the problems of a lot of moving parts in a relatively small place without a huge population — but that’s the whole point,” Clinton said.

“If we can make [Dominica] the first sustainable country, and if the Virgin Islands and Puerto Rico were totally green energy, we’d lower rates. If we did these things, then everybody in the world would be coming here if for no other reason just to see how in the living daylights it got done — so I think we’re leaving a lot of opportunities on the ground.”

Solorzano pointed to the impact of climate change on coral reefs and how the increasing acidity of the oceans is killing off marine life at an exponential rate.

Since so much of the world’s population is dependent on fish and seafood, this could prove disastrous, Solorzano said.

Pitt and Enright both discussed lessons learned and strategies for the upcoming storm seasons.

For Pitt, the hurricanes of 2017 “changed the game” for preparedness, and have compelled Viya to form stronger relationships with other government agencies and form multiple contingency and redundancy plans.

“The standard for preparedness has been driven way up by the experience that we had in 2017,” Pitt said.

Enright said nonprofit Love City Strong, which started as a grassroots effort following Hurricane Irma, now serves to “capacity-build” and bridge the gap between a hurricane strike and the V.I. government’s response to St. John.

“So there is a need to capacity-build within the community because preparedness really starts at the bottom.”

Enright said education and passing down the lessons learned from previous disasters is a critical component of any recovery.

She also highlighted how St. John is stockpiling materials and supplies to speed up recovery and reconstruction efforts — a missing component after the hurricanes in 2017.

The first involved nonprofit Empowered by Light, which committed to install a resilient energy system for the Puerto Rico Emergency Operations Center, to be powered by a solar and storage microgrid.

The other involved Clean the World Foundation, which committed to launch an 18-month microenterprise development, education and preparedness project to provide jobs for women, improve the health of communities and increase the efficiency of aid delivery in future disasters.

Clinton also acknowledged the local leadership of the American Federation of Teachers, the Community Foundation of the Virgin Islands and Airlink for facilitating health screenings for nearly 10,000 students in the territory between 2018 and this year.

“We have found that everywhere in the world, what works best is a partnership model — government, private sector, NGOs and local citizens — figuring out where and how they can have the biggest impact,” Clinton said.

“The very defined population of this area means that you don’t have to be a billionaire to make a huge difference.”

The Clinton Global Initiative meeting will continue today on St. Thomas with executive sessions, networking opportunities and plenary session moderated by the Clintons.