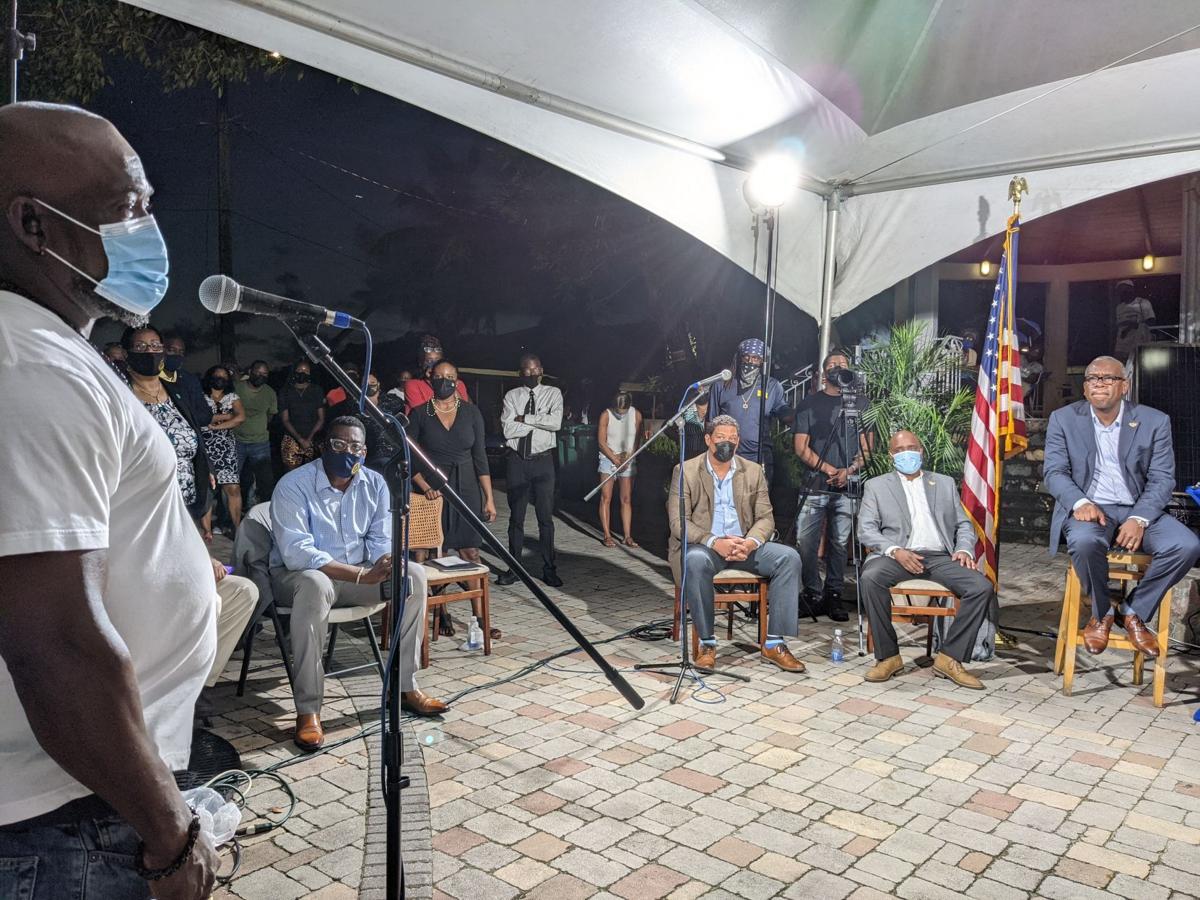 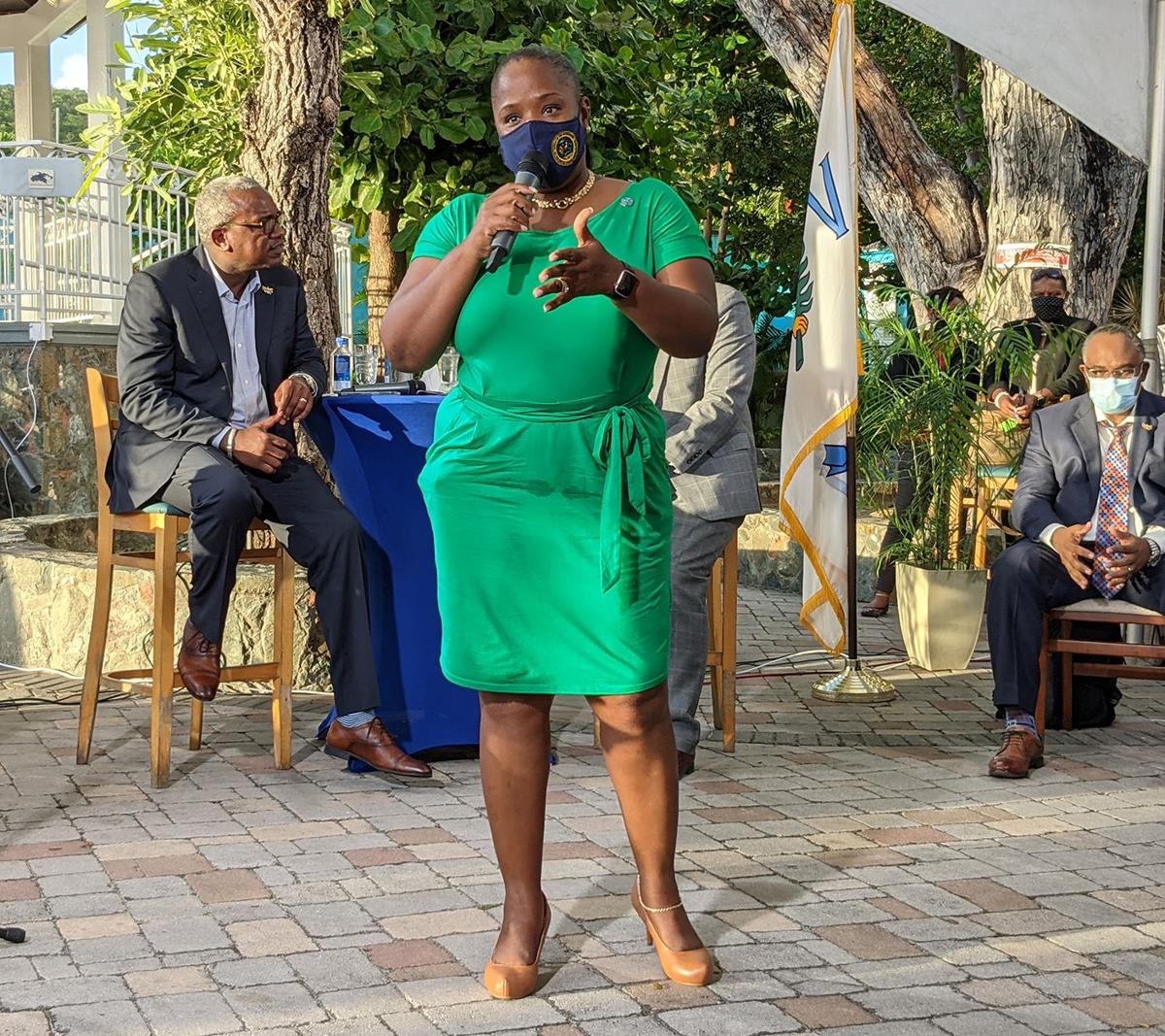 Gov. Albert Bryan Jr. hosted his first town hall meeting Wednesday night on St. John, more than 18 months after a series of planned town halls on each island were thwarted due to the coronavirus pandemic. More than 100 residents attended the meeting in the Franklin Powell Sr. Park, where masks were required to be worn through the duration of the two-and-a-half hour event. Representatives from numerous government agencies were on hand to answer questions and concerns.

In response to questions about the V.I. Water and Power Authority, Bryan noted that generators with battery backups are planned for Cruz Bay and Coral Bay to help mitigate frequent power outages that plague the island.

“St. John will never be isolated again like they were after Irma,” said the governor.

Residents raised issues regarding property taxes and an inability for some ancestral St. Johnians to be able to afford land on their home island.

“We have to leave because we can’t afford the property here,” said Evanna Chinnery. “We’re up against people who own villas. People are moving away. There are generations that don’t even know this land.”

Bryan noted that many of his own family members now live in Atlanta, to a degree that his family’s reunions are now held in that city. He pointed to the free tuition that’s offered to Virgin Islands residents at the University of the Virgin Islands as one way to encourage people to stay in the territory.

“It’s always a challenge on St. John to find property to build workforce housing,” said Bryan. “We have a serious problem with housing, especially in St. Thomas and St. John. We don’t have anywhere to put people.”

Several residents asked Bryan and his Cabinet members to help deal with the unruly behaviors of some recent tourists, including drunk and disorderly conduct aboard the ferries, the use of sunscreen with ingredients banned in the territory and walking through Cruz Bay in swimwear.

V.I. Police Department Commissioner nominee Ray Martinez said he was unaware of the increase in scantily clad visitors in Cruz Bay but promised to look into it and to ensure laws that require proper dress are enforced. Martinez also said he’d already been asked by the governor to work with the V.I. Port Authority to increase police presence at the ferry docks and the airports. The issue of the importation and sale of sunscreen with banned ingredients that threaten the health of coral reefs is more complex, as U.S. Customs and Border Protection doesn’t enforce local laws, explained the governor.

“We have to figure out a way we don’t have those sunscreens coming into the island,” said Bryan.

Several residents took Department of Planning and Natural Resources Commissioner Jean-Pierre Oriol to task for allowing the island’s resources to come under attack. Lisa Penn said she was appalled at the condition of the Elaine Ione Sprauve Library, and Lovango resident Dan Boyd asked why the voices who speak out against developments don’t seem to be heard.

“When I come to St. John, I hear three different voices — local people, snowbirds, and the transplants that live in St. John,” responded the governor. “It’s very confusing to me. I’m a born Virgin Islander. Our people used to own the neighborhood grocery stores. All kind of people come from all kind of places, and they started owning stuff and we owned less stuff. We hardly own anything. What about what we wanted? What about our heritage and lineage? Nobody listened to that.”

DPNR Commissioner Oriol addressed Penn’s concerns about the library by encouraging St. John contractors to become vendors with the government of the Virgin Islands, as the larger companies who are vendors subcontract out their government projects and charge significant overhead, driving up the costs.

“We put out a competitive bid for repairs and landscaping to be done at the library,” said Oriol. “We received two bids, both significantly over the budgeted amount we received from FEMA. We are now going to re-release the bids after including additional monies. There were no St. John bidders when this went out the first time. There are a number of projects ready for bid, so please, St. John contractors, keep them in mind and submit your interest.”

Resident Ralph Carbon shared a recent personal experience with the police department when $3,000 worth of his tools were stolen, and he found the police were “lollygagging” in response to him filing a report, he said. Carbon went on to say he did his own investigation into the theft and was able to recover some items, but despite delivering the name of the suspect to officers, the alleged thief has not been arrested.

“I’ve been on the job six days but I don’t use that as an excuse,” said Martinez. “As of this morning, I’ve made a change to provide St. John with an acting deputy chief who resides on the island of St. John. We continue to utilize antiquated strategies, and you’re going to hear of us changing up some of those strategies. We have the money to install CCTV cameras and license plate readers, but these things won’t matter if my boots don’t walk up and do the work that is required, and that’s what I intend to do.”

The final question of the evening came from resident Pam Gaffin, who noted Centerline Road’s state of disrepair, including potholes and an absence of road striping. Public Works Commissioner Derek Gabriel shared that the Centerline Road repair project is slated to go out to bid by the end of August. The $25 million project, funded with federal money, will include fixes to the road’s drainage and culverts, along with the addition of new bus stops.