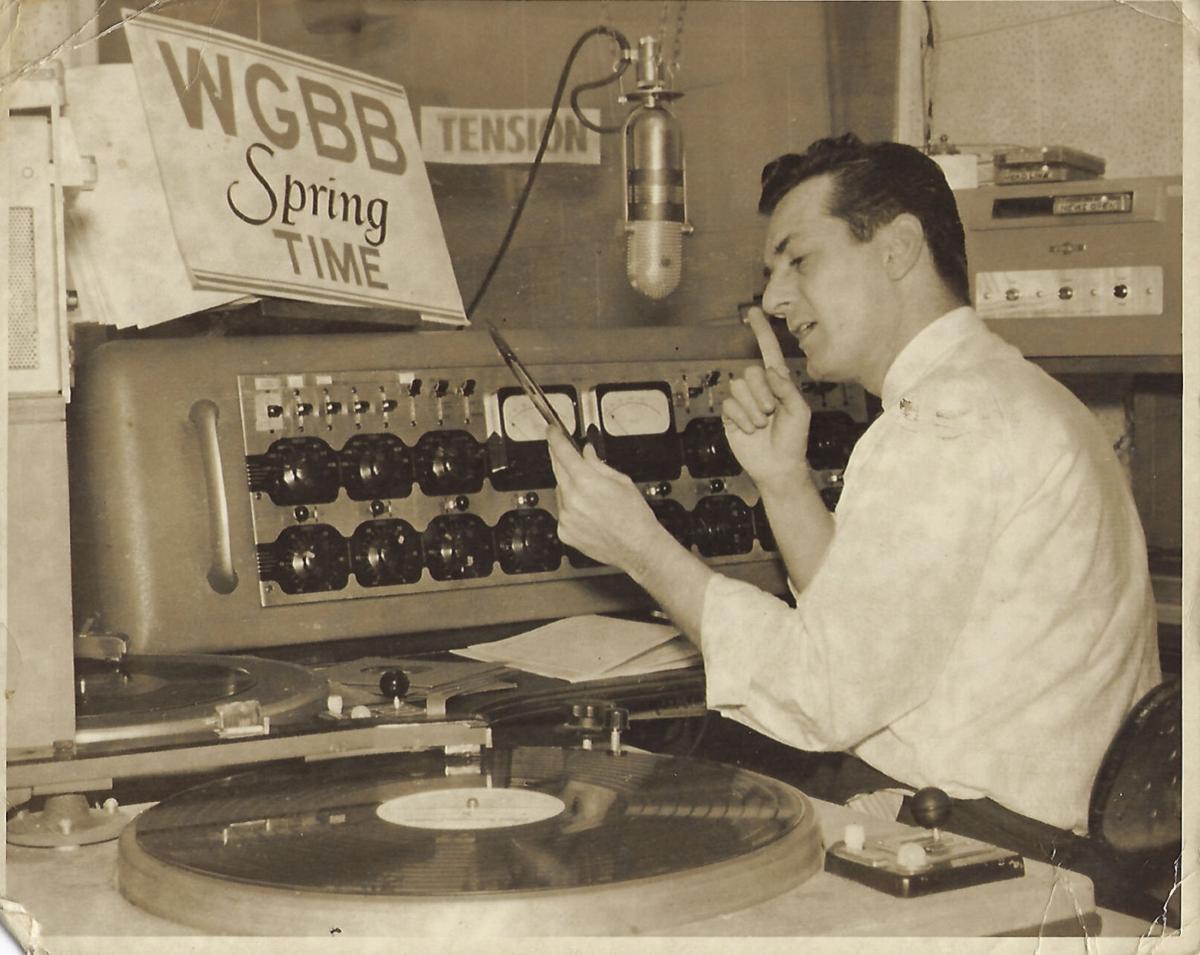 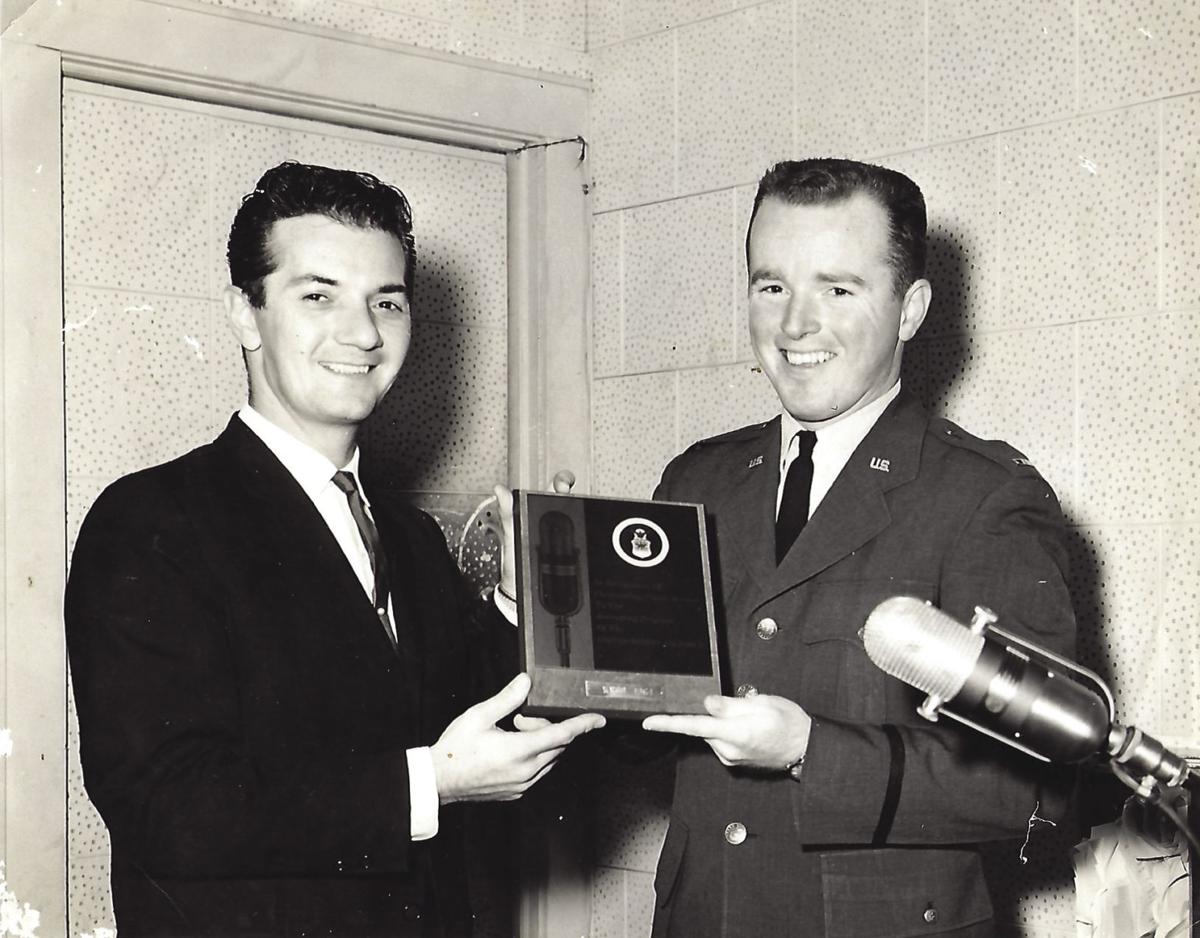 Lee Carle receives a broadcasting award from the U.S. Navy. 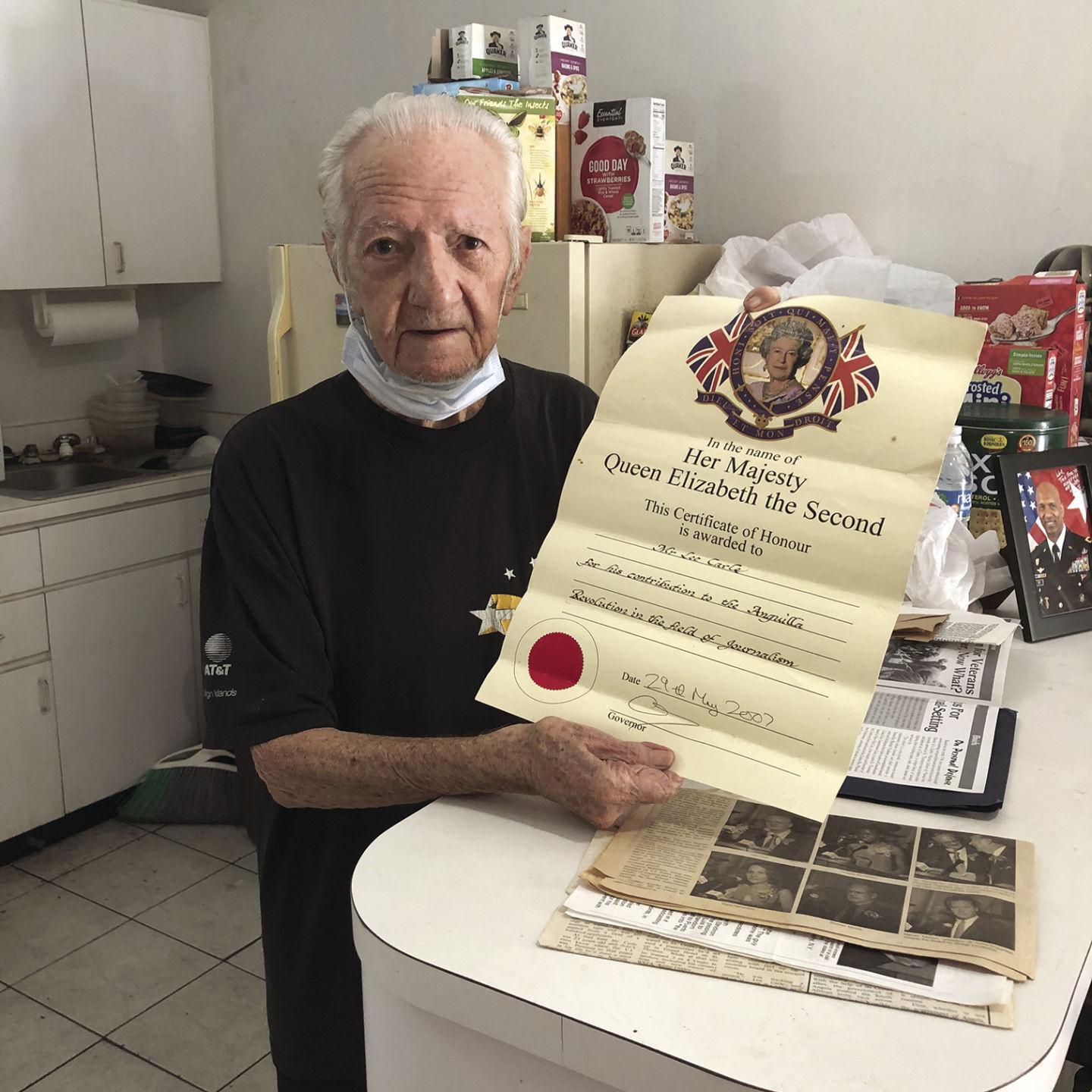 Lee Carle shows the Certificate of Honor he received from Queen Elizabeth II in 2007 for his contribution to the Anguilla Revolution in the field of journalism. Read about the Virgin Islands radio legend’s long career on St. Thomas. Page 3 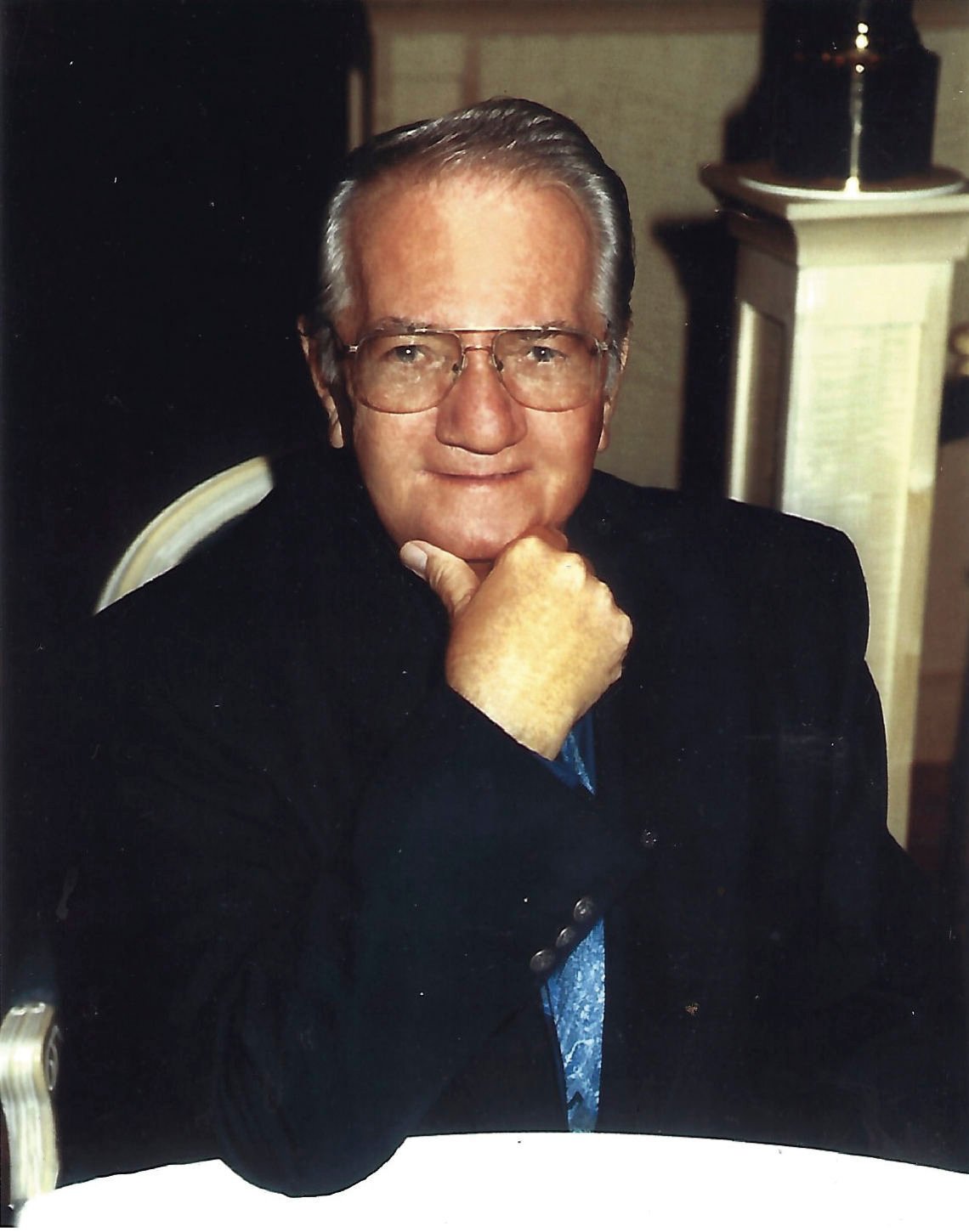 Lee Carle receives a broadcasting award from the U.S. Navy.

Lee Carle shows the Certificate of Honor he received from Queen Elizabeth II in 2007 for his contribution to the Anguilla Revolution in the field of journalism. Read about the Virgin Islands radio legend’s long career on St. Thomas. Page 3

That was the first thought that crossed the mind of the 23-year-old man in a “wool Zoot suit” as he got off the plane on St. Thomas.

The year was 1954 and that young man was Lee Carle, who would go on to have a broadcasting career that lasted more than six decades and become one of the most beloved names in Virgin Islands radio history.

Over the years, Carle rubbed shoulders with dignitaries, celebrities and politicians, some at the height of their careers, some at their very beginning. They ranged from entertainers James Brown, Stevie Wonder and Percy Sledge to Queen Elizabeth.

A storyteller to the core, Carle celebrates 91 years of star-studded stories today. He recalled much of it during an interview with The Daily News from his home at what was once a famed hotel, a short distance from Solberg.

Originally from Albany, N.Y., Carle was working as a DJ after doing a stint in the U.S. Navy as a control tower operator when his audition tape was chosen locally out of 100 applicants, and he packed his case and headed to the Virgin Islands to work at radio station WSTA. As Carle fondly remembers, he was met by the gun-toting William Greer, a top Federal Communications Corporation radio engineer and founder of WSTA, who dropped him off at “a bush-covered shack in Frenchtown.”

There, Carle was greeted by disc jockey Ron de Lugo, the future and first V.I. Delegate to Congress who was known on the air as “Mango Jones,” with bare feet and a beer on the console. The windows were open, so the sounds of chickens and dogs were prevalent. The microphone was on a rope and pulley with a rock on the other side so you could move it around. De Lugo, Carle recalled, shoved a two-day old New York Times at him and told him to read the 6 p.m. news — the first newscast he had ever done.

The rest is history.

Known mostly for his work at WSTA on and off over the years, Carle also worked at Radio One, WBNB radio (later changed to WVWI), where he teamed up with Ricky Ricardo for 18 years. He also taped segments for WSVI, Channel 8 TV. Carle more recently returned to WSTA as news director and chief engineer and did the news there until 2017.

“Everyone turned their radios to 1340AM, at 6 a.m. and again at 5 p.m. to listen to ‘News Day’,” Carle’s longtime friend Alex Joseph recalled. “Lee has been a staple in this territory since 1954, and should be recognized for his longevity and his assimilation into this community.”

Some may remember that back in the day, Carle was just as popular as an emcee, social director at the V.I. Hotel and as a concert promoter.

While still working at WSTA, Carle spent a number of years working at the V.I. Hotel, producing local shows in the hotel’s Frangipani Dining Room, putting together acts and dance groups that included local personalities such as future governor Roy Schneider; future senator Elmo Roebuck, and others including Bernard Creque, Sonny Davis, Bernard Davis, Marilyn Bastion, Luis Bastion, Jane Esannason and Lee Vanterpool, who also had a storied past as a performer and broadcaster prior to his death almost four years ago this month.

A member of a dance troupe himself, Carle’s dance partner was Jewel Jeppesen, whom he would later marry. They had a daughter, Athena.

At the V.I. Hotel, Carle set up a studio and was able to broadcast shows for WIVI. At that time, the V.I. Hotel attracted a wealth of celebrities. From Tennessee Williams to Sidney Poitier, Carle had the opportunity to interview a vast number of stars of the screen, stage and radio. Mingling with movie stars, he actually got his own shot at the silver screen in an 18-second spot in the film “Proud and Profane” with Deborah Kerr, William Holden, Thelma Ritter, Nancy Sinatra and Dewey Martin.

Because there was no one else on island at the time who knew how to emcee, Carle hosted for many shows on St. Thomas, such as the Carnival Queen competition and the Miss Virgin Islands Pageant. He also branched out to bring bigger names to the Virgin Islands to perform at Lionel Roberts Stadium. Carle emceed for stars such as James Brown, the godfather of soul, Stevie Wonder and Percy Sledge.

Breaking news — and an arrest

One of the pivotal points in his career was covering the sinking of the cruise ship Angelina Lauro, which caught fire right off the West Indian Co. dock in 1979. During a live broadcast, Carle was arrested because he refused to leave the dock.

“At the WICO dock, on orders of Milton Branch, who was the police commissioner, Police Chief Dave Canton was told to arrest me,” Carle said. “I said ‘Wait a minute. I’m on the air live and you are violating the first amendment of the constitution.’ They surrounded me with their cars blaring and their sirens and everything, and with that, someone disconnected my mic. All of a sudden, there was a call at the booth at the WICO dock and it was Gov. (Juan) Luis, who told Branch on the phone to put me back on the air or else.”

WSTA with Brownie and Addie

Besides his own active career, Carle was also mentor to two of the Virgin Islands’ most popular radio personalities, Irvin “Brownie” Brown and Athniel “Addie” Ottley, the current owner of WSTA.

“Not everyone knows where Brownie came from,” Carle told The Daily News. “When my wife was pregnant with our daughter Athena, she didn’t want to have the baby here on her mother’s advice, so I went up to the states for a while and got a job at WGBB, which I managed.”

Carle tells this story about two of the other popular names synonymous with WSTA.

“When I came back, I went to Bamboushay. Brownie was playing drums with Milo and the Kings and on the bass was a guy named Billy Harrigan. Harrigan later became Jon Lucien. I said to the manager at the station that most of the time on the calypso show in the afternoon, we have a continental from the states who knows nothing about calypso. We need somebody who knows calypso and I suggested Brownie. He said to bring him in — and in two or three words out of Brownie’s mouth, he hired him on the spot,” Carle said. “Addie — I picked out of a disc jockey contest and I knew him in the community from when I was with the V.I. hotel.”

Peter Ottley, Addie’s younger brother, was Carle’s engineer during much of his time at WSTA, working side by side through every hurricane that hit the Virgin Islands.

“What I love about Lee most is he’s a great storyteller,” he said. “He has lots of stories and he’s a fun guy. I’m just so happy he is blessed with long life and is still sharp as ever,” Peter Ottley said. “On behalf of the staff here at WSTA, Addie, the crew, we want to say ‘Happy birthday’ to Lee and ‘We love you.’ We’re definitely going to see him for his birthday and do something with him so our audience can hear him again.”

As to the question Carle asked himself back in 1954, the answer is simple. He did plenty by keeping the community informed. Today, the Virgin Islands community congratulates him on his birthday, and on a life well and fully lived.

Thank you, Mr. Carle, for your service over these many years.