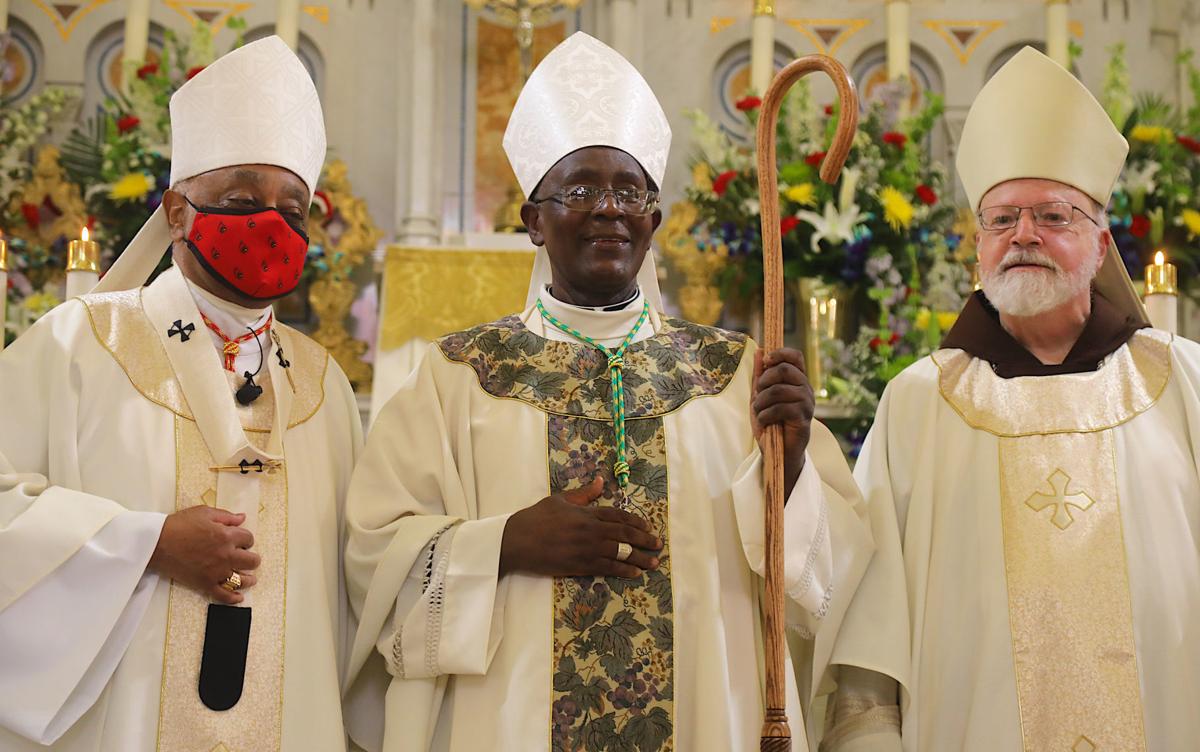 His Eminences Wilton Cardinal Gregory, left, and Sean Cardinal O’Malley, right, pose with the Most Reverend Jerome Feudjio as he in installed as the sixth bishop of the Diocese of St. Thomas on Saturday at Ss. Peter and Paul Cathedral in Charlotte Amalie. 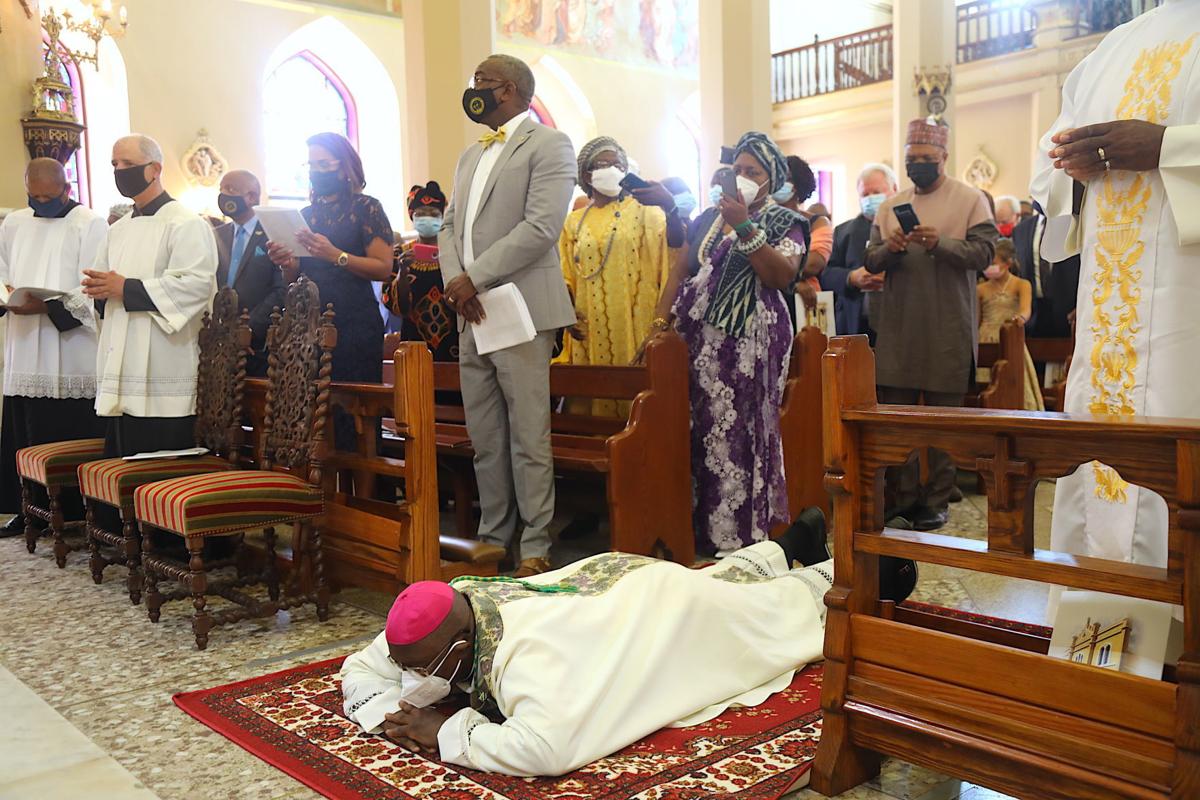 Bishop-elect Jerome Feudjio prostrates himself in the sanctuary of Ss. Peter and Paul Cathedral on Saturday during his installation in which attendees included Gov. Albert Bryan Jr., first lady Yolanda Bryan, and Lt. Gov. Tregenza Roach. 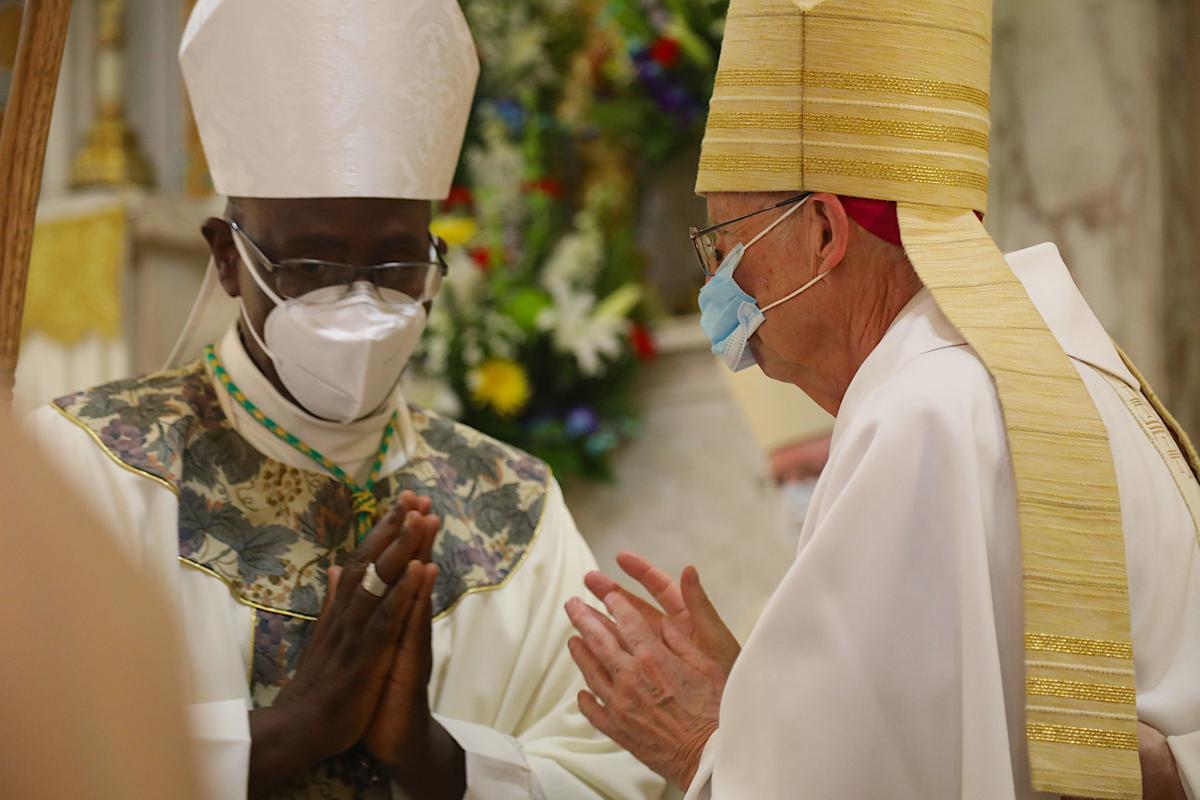 His Eminences Wilton Cardinal Gregory, left, and Sean Cardinal O’Malley, right, pose with the Most Reverend Jerome Feudjio as he in installed as the sixth bishop of the Diocese of St. Thomas on Saturday at Ss. Peter and Paul Cathedral in Charlotte Amalie.

Bishop-elect Jerome Feudjio prostrates himself in the sanctuary of Ss. Peter and Paul Cathedral on Saturday during his installation in which attendees included Gov. Albert Bryan Jr., first lady Yolanda Bryan, and Lt. Gov. Tregenza Roach.

ST. THOMAS — Cheers erupted from a packed Ss. Peter and Paul Cathedral on Saturday as Most Reverend Jerome Feudjio was ordained bishop of the Diocese of St. Thomas after 30 years of service to the Catholic people of the Virgin Islands.

The diocese’s sixth bishop, Feudjio’s journey to this moment was one of many challenges, beginning in the violence of a war for independence that erupted in 1955, the year of his birth, in his native Cameroon.

“There was civil unrest in Cameroon,” he said in brief remarks. “My father died when I was 5 years old.”

As the French Army scoured Cameroonian villages to root out terrorists, a young Feudjio watched in his mother’s arms as their home in Dschang was burned. So began a self-described nomadic life; moving with his mother from one relative’s household to another, separated from his siblings who went to live with other family members.

Catholic missionaries offered a refuge for the young Feudjio through education.

“The missionaries opened the door to us,” he said. “They offered schooling at an affordable cost. And more than that, they offered kindness and love.”

From that time into the 1980s, he would feel the tension between following his passion for the faith and the path of marriage and a secular profession, borne of familial obligations.

Feudjio graduated college in Mbanga with a degree in bookkeeping from the St. John College of the Christian Brothers of Quebec. More than numbers, he was impressed by the Christian brothers and their lifestyle.

“Their good example sowed the seeds of my vocation,” he said.

He became a postulant in the Congregation of the Fathers of the Sacred Heart, and attended seminaries in Otelé, and Yaoundé, Cameroon.

But when his brother died, relatives pressed him to abandon his path and carry on the family legacy. A cousin in America sent him a plane ticket to Illinois to study accounting and English.

The turning point in his religious life came in 1980 when he met then-Father, now Cardinal, Seån Patrick O’Malley in Washington, D.C.

Feudjio had been staying at the apartment of Martin and Josephine Djoukeng, young newlyweds at the time who hailed from the same Cameroon subdivision as his.

“He is not only a friend but we feel like we are parents to him,” said Josephine Djoukeng, who with her husband attended Saturday’s mass. “To be here is a testimony that anything is possible.”

As a wave of French-speaking Catholic immigrants entered the United States, O’Malley had been taking them under his wing. He offered Feudjio a place to stay at the San Francisco House for foreign seminarians and invited him to minister to the Haitians and Cameroonians who had recently migrated there.

An interest in social justice and troubled youth led him to finish his graduate studies in administration of justice at Southern Illinois University. Still, through the 1980s, he stayed his course to the priesthood, making his religious profession with the Oblates of Mary Immaculate in 1987.

The following year, it was O’Malley again, now serving as Bishop of the Diocese of St. Thomas, who guided him; this time to join him in the Virgin Islands as campus minister at Ss. Peter and Paul Catholic School.

In1990, O’Malley ordained him to the priesthood.

At Saturday’s Mass, Feudjio told the story of how in Washington, then-Father O’Malley had given him — a student without a driver’s license — the wheel of his car to drive them around the city. With the car suddenly careening out of control around a corner, the senior priest quickly leaned in and brought it under control.

“He put his trust in me, and somehow we made it through,” Feudjio said with his mentor the Cardinal, now Metropolitan Archbishop of Boston, at the altar to witness his ascent.

His Eminence Wilton Cardinal Gregory served as the main celebrant at the mass in the presence of His Excellency Christophe Pierre, the Episcopal Nuncio to the U.S.

Feudjio succeeds Bishop Herbert Bevard, who stepped down from the post in 2020 for health reasons. Bevard, too, presided at the Saturday mass and received enthusiastic applause for his service, which included the restoration of the St. Thomas cathedral.

Part of Feudjio’s popularity stems from the fact that, unlike most of the diocese’s bishops who came to the Virgin Islands from outside, he has touched the lives of the Catholic faithful here over decades in his roles as pastor of Holy Family Parish, director of vocations, coordinator of the prison ministry, vicar general and chancellor of the diocese, and much more. He was known to make house calls to pray with and for the sick and the shut-ins who no longer could attend mass.

He helped to recruit more than 60% of the priests now serving in the diocese, and was instrumental in inviting members of the Daughters of the Holy Family from Cameroon to minister in Virgin Islands.

In 2002, Pope John Paul II named him a Chaplain of His Holiness and conferred on him the honorific title of monsignor.

The enthusiasm for Feudjio’s installation also comes from the triumphal example of his perseverance to overcome adversity; a story many of his followers, from Cameroon to the V.I., identify with.

“It means a lot for us because we have known him since the beginning, through his struggles, every step of the way,” said Jeanne Metangmo, the queen, or moffa, of Feudjio’s native village. “You never predict, but as I always say, everything is possible. When you put your faith, your mind, your determination in something, it happens.”

With the announcement of his appointment as bishop-elect in March, Feudjio thanked Pope Francis “for the honor and trust he places in me,” and Bishop Bevard “for his leadership, love and dedication during his episcopacy.”

He also thanked the people of the diocese, saying, “Your faith and your dedication to the Church have ignited my zeal and motivated me to joyfully offer my contribution to this, our diocese.”