Skip to main content
You are the owner of this article.
Edit Article Add New Article
You have permission to edit this article.
Edit
Home
News
Sports
Opinions
Records
Island Life
Classifieds
Special Publications
1 of 3 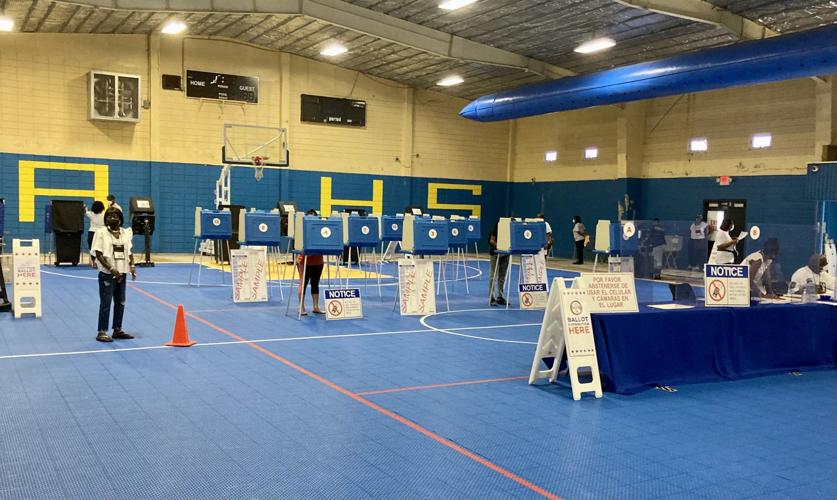 Poll workers at Charlotte Amalie High School said it was a smooth day of voting for Saturday’s primary election, and high early voting turnout helped keep the crowds steady but manageable throughout the day. 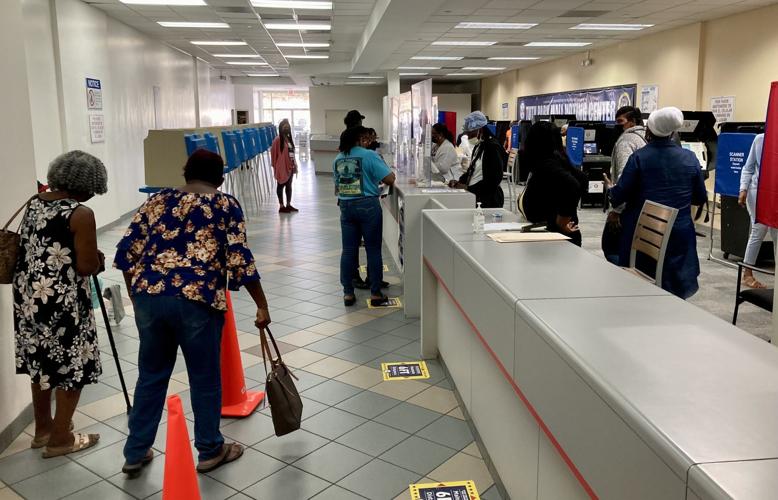 The former Scotia Bank location in Tutu Park Mall on St. Thomas was used as a polling place for the first time during Saturday’s primary election, and the convenient central location with public transit and ample parking proved a success. 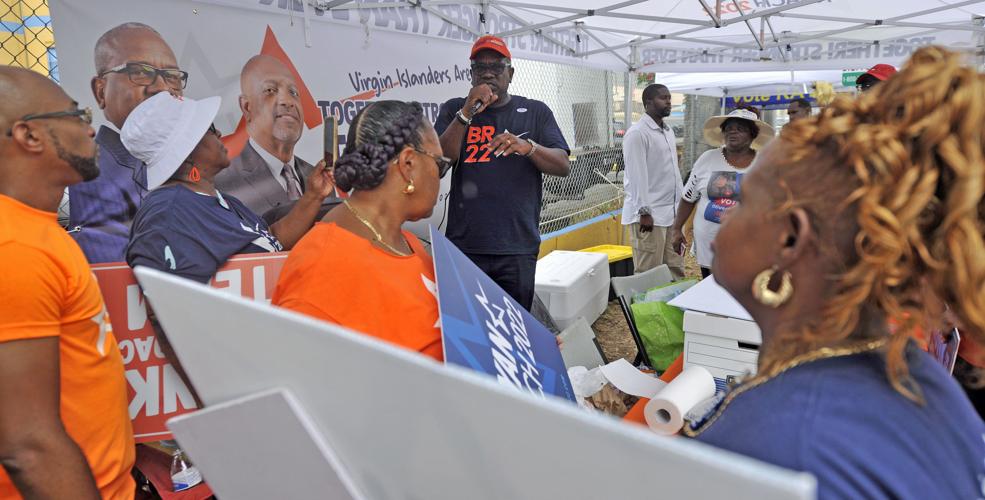 Poll workers at Charlotte Amalie High School said it was a smooth day of voting for Saturday’s primary election, and high early voting turnout helped keep the crowds steady but manageable throughout the day.

The former Scotia Bank location in Tutu Park Mall on St. Thomas was used as a polling place for the first time during Saturday’s primary election, and the convenient central location with public transit and ample parking proved a success.

Democrats who voted in Saturday’s primary mainly chose to support incumbents on the ballot, including the gubernatorial team of Gov. Albert Bryan Jr. and Tregenza Roach, and several popular senators who are running for re-election.

The Bryan-Roach team coasted to victory against their rival Democrats, the gubernatorial team of Kent Bernier Sr. and former Sen. Oakland Benta.

Vialet, a Democrat and a top vote getter in past St. Croix district Senate races, is running as an Independent.

Bryan thanked his supporters in a public statement issued Sunday.

“Tregenza and I are extremely grateful for the support and the vote of confidence and thank all the voters who participated in the democratic primary election,” according to the statement. “I also want to congratulate all the Democrats who were successful last night and thank those who were not for putting themselves forward and encourage them to continue to engage the community and the Democratic Party. I also want to extend a special thank you to State Chairman Cecil Benjamin for his efforts to ensure collaboration and cooperation among Democrats during his tenure.

In the Senate district races, seven senators in the St. Thomas District and seven in the St. Croix District will go up against numerous independent and ICM candidates in the general election on Nov. 8.

On St. Thomas, Senate President Donna Frett-Gregory received the most support with 2,055 votes, followed by fellow incumbents Milton E. Potter with 2,004, Carla Joseph with 1,526, and Marvin A. Blyden with 1,502.

Only six votes separate Whitaker from the eighth-place finisher, Hubert Frederick, who received 1,179 votes, followed by Troy C. Williams with 722.

That means the final results could theoretically change after all of the remaining ballots are counted.

Official results will not be certified until Aug. 16, to allow for counting of absentee and walk-in ballots, which begins today at 2 p.m. at the St. Croix election office in Sunny Isle, and the St. Thomas election office in Lockhart Gardens.

One primary result that will not change after absentee ballots are counted is in the race for At-Large Senator from St. John.

Newly sworn-in At-Large Sen. Angel Bolques Jr. was overwhelmingly re-elected to a full Senate term in the 35th Legislature, after the 34th Legislature ousted Steven Payne Sr. over a sexual harassment complaint from a Senate employee.

Bolques received 3,546 votes to Payne’s 1,010, according to the unofficial results released Saturday.

Bolques will now go on to face Independent candidate Sherry-Ann Francis in the general election on Nov. 8, as Payne continues to pursue a legal battle in V.I. Superior Court to regain his seat in the 34th Legislature before the term ends in December.

There are 34,697 registered Democrat voters in the territory, and 6,674 cast ballots in the primary, a turnout of 19.24%, according to the unofficial results released by the Elections System just before midnight Saturday.

Of those ballots, 4,416 were cast during the early voting period, which resulted in a calmer Election Day for in-person voting at polling places Saturday.

On St. Thomas, voters cast ballots at the University of the Virgin Islands Sports and Fitness Center, Charlotte Amalie High School, and the former Scotia Bank location in Tutu Park Mall, which was used as a polling site for the first time Saturday.

Polling judge Elise Frazer said the location was working out well, and voters had been moving through efficiently, with many choosing to use touch screens to cast their vote, rather than the traditional paper ballots.

They and the other Elections System workers who organized the primary “did a wonderful job,” Wells said.

Polling Judge Karen Blyden has been manning elections for more than 20 years, and said that the process went smoothly, other than some voters’ confusion about the primary ballot — which included only Democrats running for the same offices, not candidates from the independent, ICM, and Republican parties, who the primary winners will face in the general election on Nov. 8.

Judge Tisean Hendricks agreed that “it’s been moderate pace today,” and the day passed without incident.

On the sidewalk outside the Charlotte Amalie High School gates, supporters lined up with T-shirts, flags, signs, and placards to make a last-minute pitch for their candidates as voters entered the polling place.

Cynthia Bernier said police officers confronted supporters of her father, Kent Bernier Sr., and said they were within the 200-foot buffer zone for electioneering at polling sites and needed to move.

“It’s just targeted to us,” but the group stood their ground and police left without further incident, she said.

V.I. Police spokesman Glen Dratte did not respond to questions from The Daily News about the police presence around the polling site.

Other than that, “it’s going wonderful,” Bernier said. “We’re out here trying to do change for the betterment of the people.”

Bernier said her father launched a gubernatorial campaign because “we feel like our island deserves more,” and “it can be different for our people if the right leadership is there.”

“We don’t need a change, we need a reset,” agreed Monique Faulkner.

She said the territory’s schools and hospitals remain in shambles five years after the 2017 hurricanes, and more needs to be done to provide affordable housing for Virgin Islanders who are quickly being priced out of life in the territory.

But Patrick Massicot, a poll worker supporting the Bryan-Roach ticket, said he’s satisfied with the team’s work so far, and cited Bryan’s success in steering the territory through the COVID-19 pandemic and helping to bring the Government Employees’ Retirement System back from the brink of insolvency.

“I believe in Albert’s vision and the direction he wants to take the Virgin Islands,” Massicot said.

Residents are stressed over the high cost of energy thanks to the V.I. Water and Power Authority, and rising prices for gas, food, and other basic commodities are putting strain on families, Richards said.

But “people have to understand that it’s a process,” particularly when it comes to sorting through the Federal Emergency Management Agency’s requirements for spending federal recovery dollars, she added.

Many of the issues facing the territory are also “systemic” problems that have persisted for decades, and the government needs to put the right infrastructure in place and keep up on maintenance, which takes time and planning, Richards said.

The Bernier-Benta campaign filed frequent complaints against the Democratic Party in recent months, accusing leaders of showing favoritism for the incumbent gubernatorial team.

But Richards said leaders chose to support candidates that have been active party members, and she felt the Bernier-Benta team did little to persuade party officials to shift their support.

“You create unnecessary distractions to obscure your ineptness,” Richards said. “They have nothing tangible to offer the people of the Virgin Islands so they concoct all the false accusations.”

Richards said she’s been active in the party for more than 40 years, and “we want to pass the torch” and recruit younger members and candidates.

Territorial at-large and district committee candidate Olivere Wade, 63, agreed that the younger generation needs political role models their own age, and younger candidates can better serve the needs of their peers.

One of the young people stepping up to the plate is Delekah Callwood, 21, who said she was running for seats on the Board of Elections and the Democratic committee to help encourage other young people to become politically active.

“You can’t complain about things if you didn’t vote,” Callwood said. “Every vote counts, every vote matters.”

Over the years, many people “have been fighting for the right not only for Black people but for women to vote,” and “in some countries, women can’t vote still,” Callwood said.

“People have died for this, people have fought for this,” and she encouraged all eligible voters to not take that liberty for granted.

On St. Croix, the election spirit was high though the voter turnout was rather low, by most accounts.

Tents in varying colors lined both sides of the streets leading to the polling sites as campaign volunteers tried to entice arriving voters to cast their vote for their candidate, and there were several DJs blasting music at each site. Individuals on microphones also blurted out campaign slogans and other election rhetoric to the those passing by.

At Arthur Richards, campaign workers danced in the streets to music, waving their candidates’ signs in the air.

Things got contentious at Canegata at one point as a Bernier-Benta supporter crossed the street to taunt Bryan-Roach supporters. There was some chest bumping and name calling among cheers or “four more years” and “no more years” but the situation ended with hugs and laughter.

Motorcades zigzagged across the island as the polls closed and candidates retreated to their homes, local bars, headquarters, or the Elections System office to get primary results.

It was a quiet day at polls on St. John, and while residents were seen campaigning at the Cruz Bay roundabout midday, they’d packed up and left by mid-afternoon.

Poll workers at Julius E. Sprauve School reported that the polls had been largely quiet, with few residents coming in to vote in the primary election.

In addition to the Democrats who emerge victorious from the primary once the official results are confirmed, the candidates for the St. Croix Senate race in the general election on Nov. 8 will include independent incumbent Sens. Franklin Johnson and Samuel Carrion, and other independent candidates Shalima A. Edwards, Patricia M. James, Julian S. Veira, Devin F. Carrington, James P.G. Wakefield, Michael J. Springer, and Norman H. Jn Baptiste. Tyrone Molyneaux is the ICM party’s only Senate candidate on St. Croix.