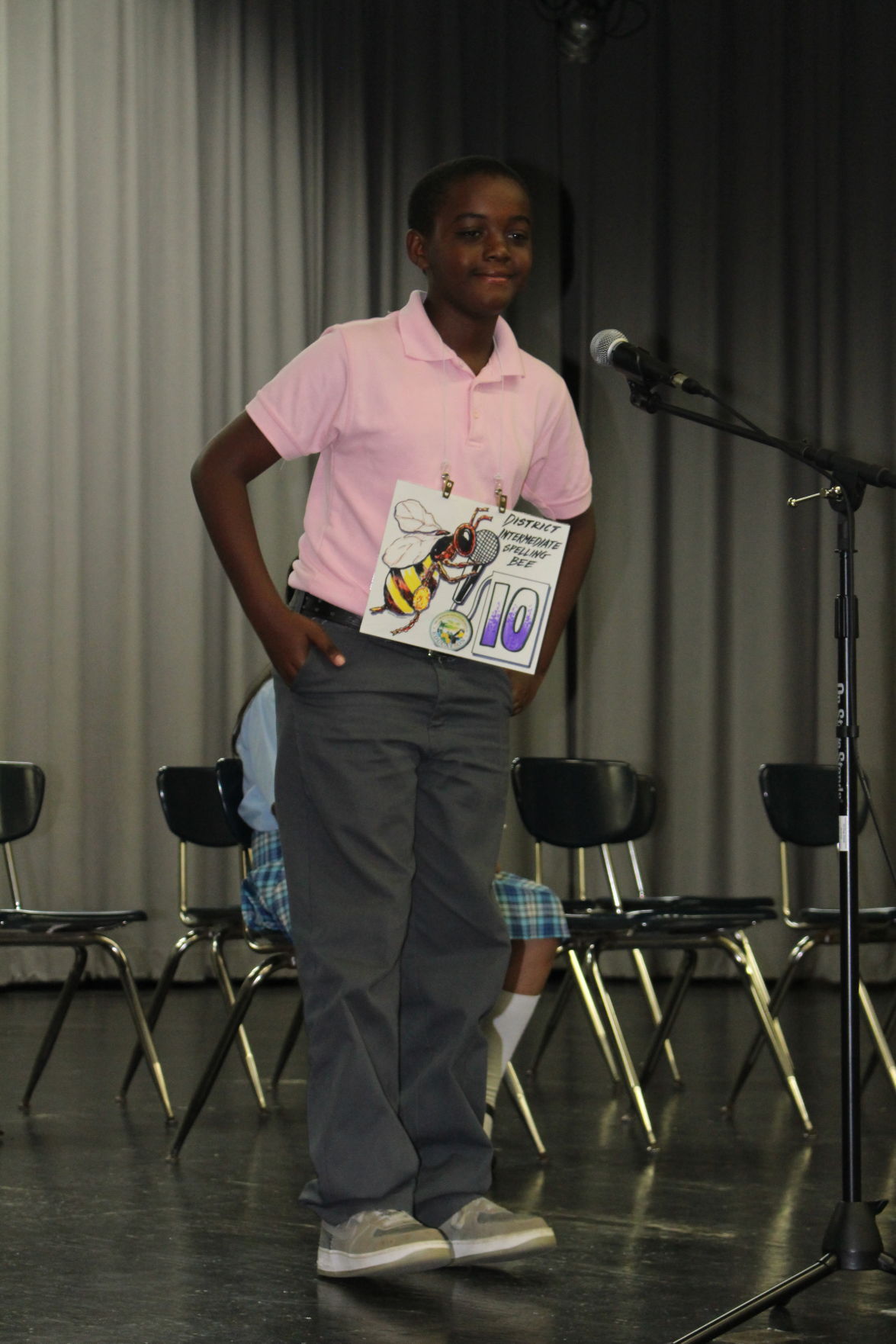 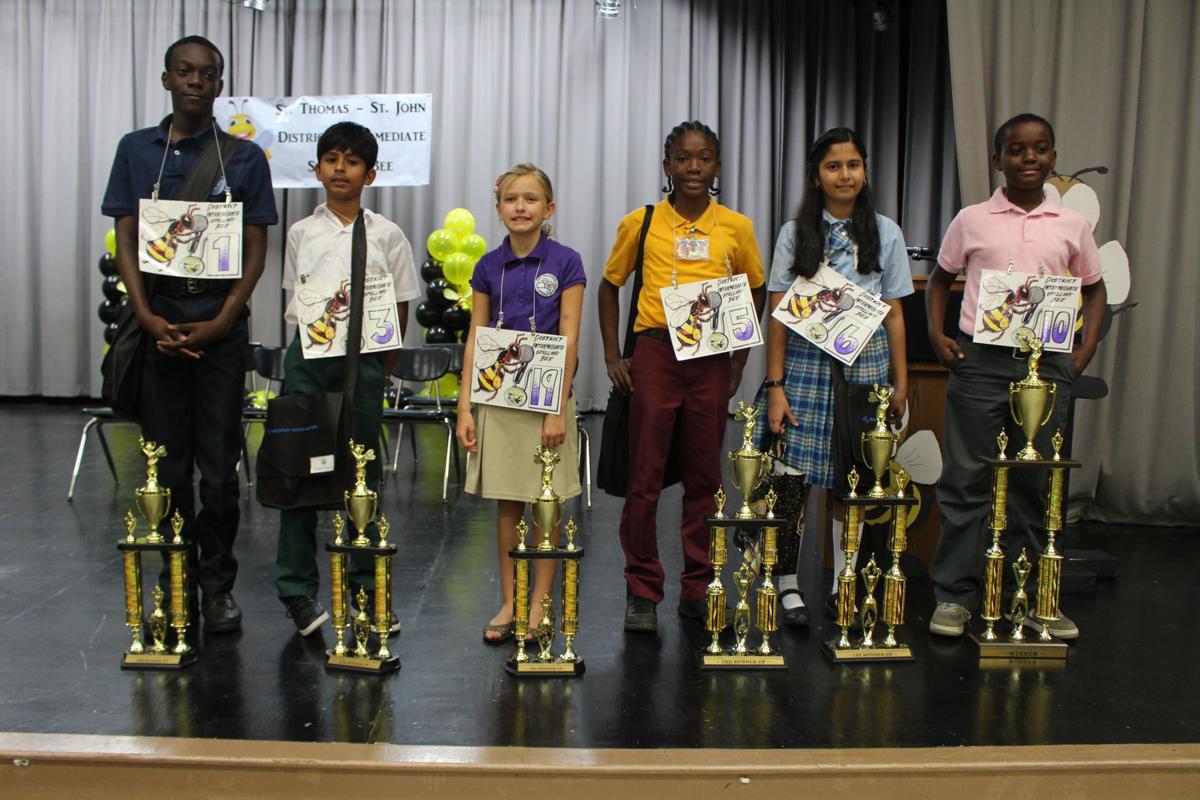 ST. THOMAS — It was an exciting morning at Bertha C. Boschulte Middle School on Friday, as a group of determined spellers battled to become the St. Thomas-St. John District Spelling Bee champion.

Spellers went through 127 words over 26 rounds, including the championship word, “dossier,” spelled by winner Joshua Morgan, 10, a sixth-grader at Gladys A. Abraham Elementary School.

“It feels good,” Joshua said after his win.

While he was, “a little nervous when I was on the stage,” Joshua successfully spelled a number of challenging words, including, “pumpernickel,” “filibuster,” “juggernaut,” “babushka,” “nebbish,” “salaam,” “Weimaraner,” “Baedeker,” and, “pickelhaube,” which is a spiked helmet worn in the 19th and 20th centuries by German military, firefighters and police.

First runner-up Waniya Baig, 11, a sixth-grader at Lockhart Elementary School, successfully spelled words including, “ipecac,” “fete,” “cappelletti,” “mercurial,” “bravura,” and, “gesundheit,” but she was tripped up in the final round by the word, “rejoneador,” which refers to a bullfighter on horseback.

“I wasn’t scared,” said Waniya, who said she studied by breaking words down into syllables and learning their origin and alternative pronunciations.

Shagufta Baig said her daughter is hardworking and self-motivated, a trait many parents said their champion spellers share.

“This is her day today,” Shagufta Baig said, adding that her daughter is a voracious reader who devoured 450 books this summer alone.

Joshua and Waniya will join four others as the top six finalists to move on to the Territorial Spelling Bee on St. Croix on March 22: V’Andre Amoi Rochester of Bertha C. Boschulte Middle School; Mera Foster of Gifft Hill School; Krishiv Amarnan of All Saints Cathedral School; and Adien Glasford of Wesleyan Academy.

V’Andre’s parents, Annie Wilson and Verne Rochester, were overjoyed with their son’s performance.

“He wanted it so bad,” Rochester said, noting that he has woken up on weekends to find his son already awake and studying vocabulary in preparation for the competition.

“We’re gonna bring that ‘A’ game,” he said about his son competing in the territorial bee.

V’Andre said he taught himself to close his eyes, picture the word, and mimic writing it out on his hand as he is spelling, which helps him focus despite the pressure of being onstage.

“Just the thought of going to Washington D.C.,” for the national finals, V’Andre said.

Friday’s competition was tight, with several spellers fighting through challenging words in the last few rounds.

Seven of the 19 contestants were knocked out in the first round, and three in the second, halving the field almost immediately.

All contestants survived round three, three were knocked out in round four and two more in round five, leaving only four finalists, who persisted together with perfect spelling through 15 rounds.

Mera, a tiny and bubbly crowd favorite, had a misstep on “intractable,” and it took another six rounds before V’Andre missed “debacle,” before getting a round of cheers from his home-school crowd.

As the final two spellers, Joshua and Waniya went back and forth for another two rounds before “rejoneador” ended Waniya’s quest for the championship.

However, no contestants went home empty-handed, with trophies and goody bags given out to all, and electronics and cash prizes given out to the top finalists.

Sen. Tregenza Roach said he tries to attend the spelling bee every year.

“Because it’s so wonderful to see our young people excelling and putting their efforts into positive things,” he said.

Sen. Janette Millin Young recalled her own son competing in the bee and sympathized with stressed parents and jittery contestants.

“I know how nervous you get, how exciting everything is,” Millin Young said. “You spelled some words I couldn’t spell!”

Lockhart students have had success at previous bees, and the top three finalists came from the territory’s public schools.

“It shows to them that we can get quality, awesome performances out of our public schools,” Hodge said.

In terms of tips for aspiring competitive spellers, Joshua had some championship-winning advice.

“Don’t be scared, have courage in yourself, and be confident that you’ll truly be a winner,” he said.