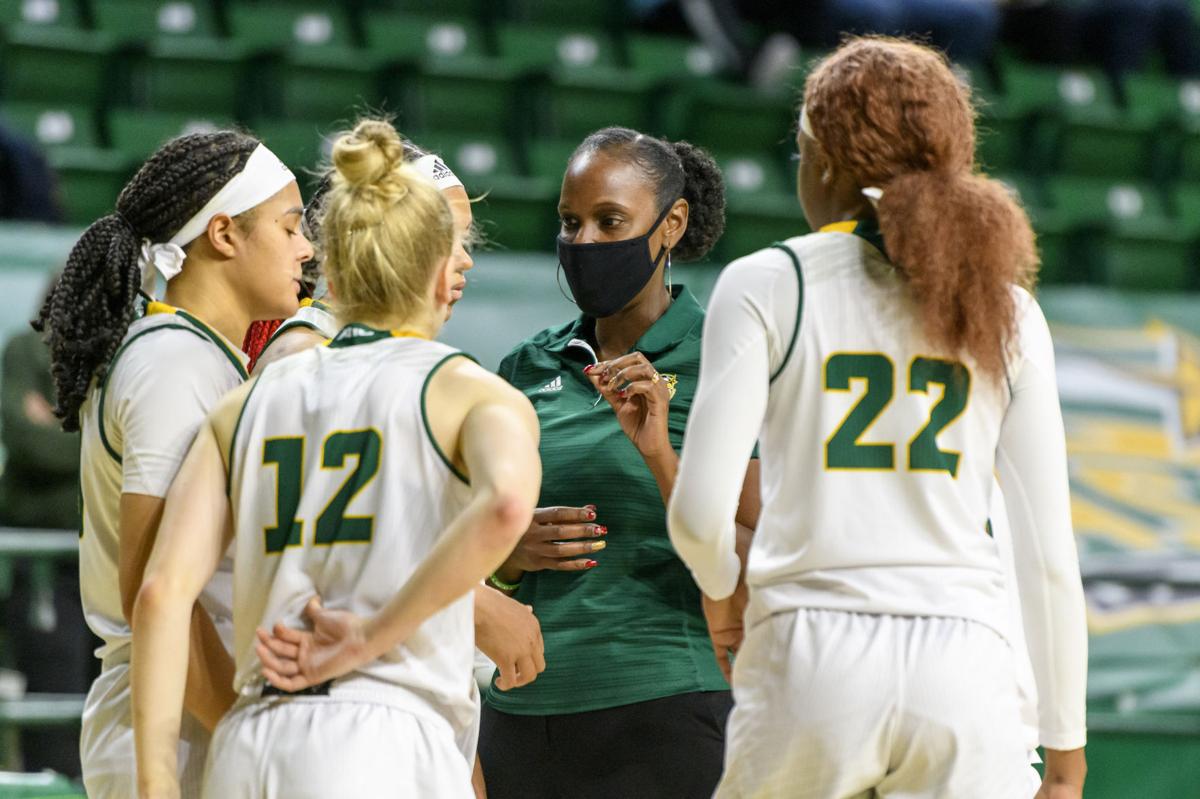 George Mason assistant coach Tajama Abraham-Ngongba, center, talks with her players before the start of the Patriots’ game against Virginia Commonwealth on Jan. 13 in Richmond, Va. Abraham-Ngongba, a native of St. Croix, was named head coach of the U.S. Virgin Islands senior women’s national team on Monday.

George Mason assistant coach Tajama Abraham-Ngongba, center, talks with her players before the start of the Patriots’ game against Virginia Commonwealth on Jan. 13 in Richmond, Va. Abraham-Ngongba, a native of St. Croix, was named head coach of the U.S. Virgin Islands senior women’s national team on Monday.

It started off as a phone call out of the blue to Tajama Abraham-Ngongba.

But it didn’t take many more to convince the St. Croix native to return as head coach of the U.S. Virgin Islands’ senior women’s national basketball team.

Abraham-Ngongba will hit the ground running, too — training camp for the USVI National Team will be held on St. Croix beginning March 14, with the team moving on to play in the FIBA CentroBasket for Women Championships in El Salvador, which begins March 24.

“I’ve already talked to a couple of the players, like Lanese Bough, Brittany Matthews and Victoria Hamilton — some of the players who I’ve coached in the past, and are still competing and are going to be there for us,” Abraham-Ngongba said in a telephone interview Tuesday.

This will be Abraham-Ngongba’s second time coaching the USVI National Team, leading the senior women’s team from 2011-2014. In that stretch, the U.S. Virgin Islands finished third in the 2011 Caribbean Basketball Confederation’s Women’s Championship, and sixth and fourth in the 2012 and 2014 FIBA CentroBasket tournaments.

She was also an assistant coach on the USVI’s junior women’s national team that took the gold medal in the 2001 CARICOM Junior Championships, and was the team captain on the USVI National Team in the 2002 CARICOM Women’s Championships.

It was that experience — both as a player and coach — that led David Edole, general secretary of the Virgin Islands Basketball Federation, to reach out to Abraham-Ngongba.

“We needed somebody who knew the girls,” Edole said in a telephone interview. “Because it was a short window [until the FIBA CentroBasket tournament], she had to be able to come in and take off running.”

Abraham-Ngongba grew up on St. Croix, but her family left the island and moved to Hampton, Va., in 1989 after the destruction wrought by Hurricane Hugo.

Abraham-Ngongba, a 6-foot-2 center, went on to become a four-year starter at George Washington, where she led the Colonials to four straight NCAA Tournament appearances between 1994-1997. She still holds the program record for career scoring (2,134 points) and blocked shots (326).

Abraham-Ngongba went on to play two seasons in the WNBA — for the Sacramento Monarchs in 1997, and the Detroit Shock in 1998 — as well as one year for Cavigal Nice Basket in France’s Nationale Feminine 1 (NF1) league.

But the urge to do something else made Abraham-Ngongba switch to coaching, beginning as an administrative assistant with George Washington’s women’s team in 1999. She soon became an assistant coach — first with the University of Richmond for two seasons, then at Virginia Commonwealth for two more seasons before returning to the Colonials.

Four years later, Abraham-Ngongba earned her first head coaching job, taking over at Radford University. In five seasons, she compiled a 62-85 record – including a 22-11 mark in 2010-2011, earning her the Big South Conference’s coach of the year award.

However, Radford opted not to renew her contract after the 2012-2013 season, which led Abraham-Ngongba to accept an assistant coaching job at George Mason.

“I was always the kind of player who was helping my teammates,” she said. “I just like the feel that when you show someone something that they don’t know they’re capable of doing on the court, and then they do it — especially in a game — and they give you that look. I love that look.”

There will be some readjusting to the international rules — which have a more physical style of play — that Abraham-Ngongba has admitted she will have to go through before the CentroBasket tournament.

The biggest will be the schedule — the USVI National Team will play five games in as many days, against Costa Rica, Cuba, the Dominican Republic, host team El Salvador and Puerto Rico.

“Five games in five days, and it’s very physical basketball,” Abraham-Ngongba said. “The first time I was coaching, I didn’t understand the physicality and how that affects different players.

“The bottom line I’ve learned in these tournaments is that you just have to get your team to compete in every possession, then make sure as best they can for the next go-round.”